“Percent” in chart title and on axis – redundant?

Consider the chart below: 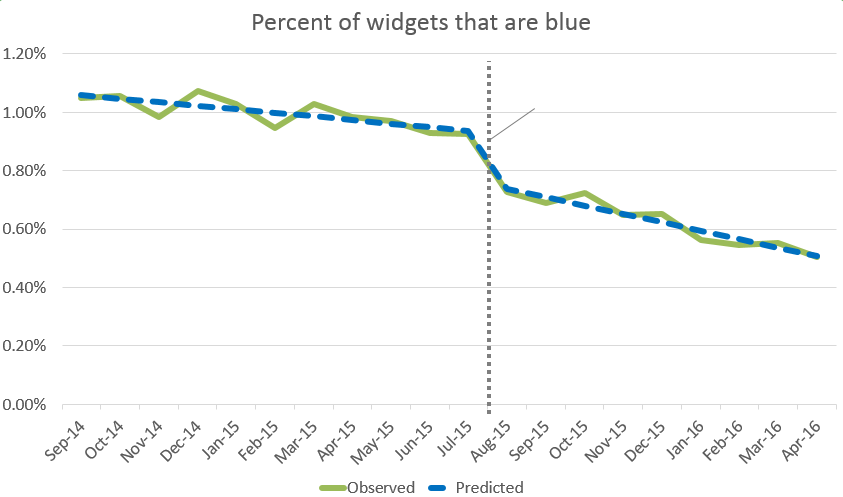 When writing percent in the title, and % on the axis marks, is this redundant? Is the word amount preferable?

I haven’t seen this addressed in any style guides such as the APA guidelines.

Percentage (parts per hundred) and, more broadly, abbreviations like ppm (parts per million) or ppb (parts per billion) do not describe any quantity, they are just multipliers for dimensionless quantities.

In a graph, instead, you should accurately describe the quantity being represented. In the example given in your question, a more appropriate title would probably be: "Fraction of the widgets that are blue".

In the SI brochure, §5.3.7, the document that defines the International System of Units, it is stated that

In mathematical expressions, the internationally recognized symbol % (percent) may be used with the SI to represent the number 0.01. Thus, it can be used to express the values of dimensionless quantities.

The percent symbol can, instead, appear in the tick labels.

At least in physics, usually graphs do not have a title at all.

Not the answer you're looking for? Browse other questions tagged writing-style graphics or ask your own question.

7
Parenthesis in paper title?
7
Is it valid to pad an axis slightly in order to enhance point visibility?
1
How best to format and position legend in line chart when legend text is long?
0
How to quote in the title of a thesis in APA style?
9
Is there a convention regarding frames around plots in engineering?
0
Does APA style satisfy AEA style requirements?
3
Are there any guidelines for labeling axes in plots/graphs when the "unit" is "number of people"?
3
Use of casual writing in scholarship applications