Should cheating be expected to be more common in Universities in India, and if so, how could any provided credentials be evaluated for authenticity?

I was a bit surprised to see the extent of cheating going on during state matriculation exams in Bihar (one of the states in eastern part of India). Looking at the images posted at twitter, it looks like large amounts of people do not have much respect for the exam process. My experience from different countries have generally been that cheaters attempt to cheat discreetly, if not so much for any other reason expect to avoid getting caught. In this example in Bihar it seems that getting caught was not a major concern for those cheating. 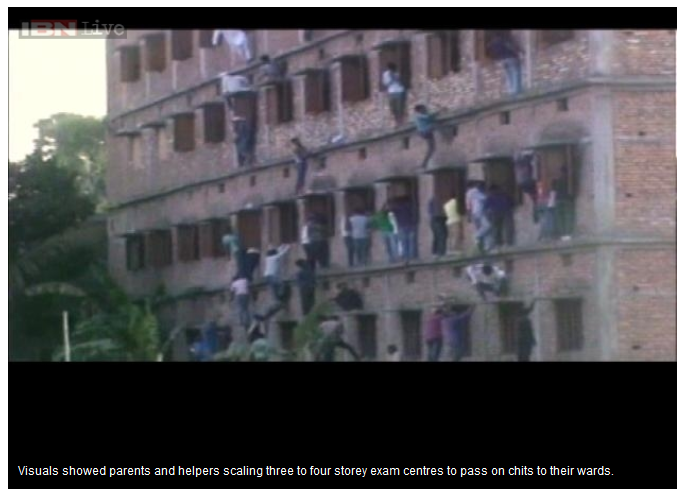 In this other article about above situation, an individual is quoted as saying:

"Any examination of this scale in any part of the country has similar complaints."

I had earlier read about corruption being quite common in India, it is just that I did not expect it have led to this type of behavior in public. For example I had an Indian friend who told me how he had obtained his car driving license years earlier without any kind of tests or qualifications by just paying a clerk at the driving license office. This sort of stories are present also in articles like this one from Reuters that says:

(Reuters) - Mahesh Kundu paid $45 for a driving license, Rupam Bhatia $110 to be admitted to hospital and Vishrant Chandra $130 for a marriage certificate. These are the commonplace bribery stories experienced by middle-class Indians who have poured into the streets to say "enough is enough."

For one reason or another I thought that this sort of requests for money always happened discreetly and money was always exchanged quietly, "under the counter". Looking at this rather public event in Bihar made me wonder, though, about what effect the level of corruption in India may have on any qualifications earned at their universities. How would you know whether a student has actually earned their qualifications?

This particular incident doesn't happen to be an university examination. This is the final grade 10h school exam that was conducted centrally by the government of state of Bihar, India. BSEB. The given situation is being highly criticized by Indian media and Indian people as well.

Coming to the question, Yes there is a lot of widespread corruption and malpractices prevalent in India. I can't guarantee you that there had been no cheating involved in passing a student in regard to any examination. However, in Indian universities especially the top ones, the aforementioned phenomenon is quite rare. Moreover, the admissions to these top universities is quite competitive and often based on entrance exams. You can cheat to pass an exam but you can't score enough to get a rank under 25k out of 1.4 million candidates. (AIEEE) That said, there are various other parameters to judge a candidate as well. Even let us suppose that a student has been able to cheat his/her way throughout, there is always an interview round to any job or any position.

Being a student who has seen the Indian higher education system from the school level to the postgraduate level and been part of lower tier as well as higher tier institutions, I think I can say a few words about this.

Now I think the statement that any exam of this scale in the country has similar complaints is an unfair generalization or plain sensationalization. I don't think so.

I think it depends more on the student demographics. The school level exams that I gave had dead silence in the halls, similar to what I experienced during my postgraduate years. The crop of students matter to a huge extent I think, so does the leniency the institution shows. Both of the above would have merely cancelled the candidate's paper if they were found to be cheating, the undergraduate one as you might imagine would not be so strict, although they did reform tremendously later.

If I generalize now, I would tell you this - A strong application I think can be assumed to be fairly authentic in the sense that although cheating is a plague in this country, one cannot ace an examination by cheating through it, it is merely not possible - sure one can pass an examination but I think that is the extent of it.

Also, I don't think it is unfair to say that a hypothetical candidate who aced exams by cheating at an undergraduate level, would not be looking to get into further higher studies - I mean why would they? They already are acutely aware of their incompetence at some level or the other. Also, I strongly believe that the fact that such a candidate is not authentic will be clear from other sections of their application - they cannot escape without having any reflection anywhere in their application. TOEFL/IELTS/GRE scores, research statement, letters of recommendations, research experience - there will be something off, enough to flag a candidate.

And finally let me put all of my experiences in context by mentioning my reaction to the example you used - the matriculation exam in Bihar. I saw those same pictures on television and to say that I was appalled was an understatement - I had never seen anything like that before. To see the education system being prostituted to that extent made me furious and I am certain nearly everyone I know shared that view. Now, I again reiterate my point, these people will NEVER send an application anywhere.

So, yes I think you can consider most applications you receive to be authentic. If they are not they will be reflected somewhere or the other, enough for you to flag it - email communications, scores etc.

PS: Yes corruption is rampant in India but I don't think it is related directly to the example above. The authorities in the picture above are not exactly on the take I think - they are likely non-existent, or lazy, or just plain scared to do anything to the mob.

Looking at below article in Los Angeles Times, it seems that cheating is wide spread and even supported by criminal gangs who have made it to source of income.

How does it compare to other countries is hard to tell exactly, but most likely it is not this bad in e.g. the west or Japan.

A snip from the article:

Six years after Rai first complained to police that state medical school exams were being leaked, the extent of the cheating scandal in Madhya Pradesh has become outrageously clear. Whistle-blowers say that over nearly a decade, tens of millions of dollars exchanged hands to rig the tests that help determine university slots and civil service jobs, allegedly with the complicity of senior politicians in one of India's most populous states.

Colluding with the state examination board, known by the Hindi acronym Vyapam, rival test-fixing gangs helped at least 2,000 students con their way into coveted medical colleges and many more land police and other government posts, authorities say.

More than 1,800 people have been arrested — mostly suspected cheaters, middlemen and testing administrators — and hundreds more are on the run.

The scandal, colossal even by India's notorious standards for graft, has grown more explosive in recent weeks with the sudden deaths of several people reportedly connected to the case.

Not the answer you're looking for? Browse other questions tagged exams cheating india or ask your own question.

13
Is scientific misconduct relatively normalised in some countries or academic cultures?

120
I was caught cheating on an exam, how can I minimize the damage?
61
Is there any way to detect high tech (e.g. cell-phone assisted) academic dishonesty?
32
Is reusing old code for a new assignment considered self plagiarism? How to protect yourself if you consider it to be, and a group partner does not?
0
Re-examinations: how common are they and what are they good for?
28
Am I obliged to tell students that there are different versions of the exam?
0
Is it wrong to unintentionally withhold information?
1
Are research opportunities common in India and how can I enroll in a research program in India during my undergraduate studies?