What ratio of PhD graduates in STEM fields ultimately end up as (tenured) professors?

I recently saw this infogram circling around various social networks: 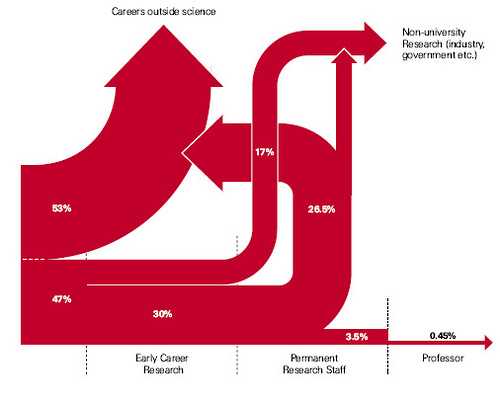 It appeared in this Tweet with the following claim:

Got a PhD? Your chance of becoming a Professor is 0.45%. Good luck.

Being a bit sceptical of the claim and of shiny info-grams in general, I traced the image back through this blog to this report by the Royal Society (see page 14), featuring various reputable academics in the introduction. The report cites a number of other reports from UK organisations as its source (I did not dig deeper). The infogram seemingly pertains to graduates of PhDs in the UK in STEM fields.

I find the figures literally incredible. I cannot believe them. Fewer than 1-in-200 PhD graduates become professors? This would imply, for example, that STEM professors in the UK would need to graduate 200 PhD students just to "repopulate" themselves.

I would like to compare these estimates with figures sourced elsewhere. And so my question is:

Are any other studies or sources of data for estimating the number of PhD graduates who end up with professorships? (... preferably within the STEM areas and not restricted to the UK)

There is a related question specifically for the maths field and referring to tenure-track positions but none of the answers really address this question: What percentage of phds in math actually get a tenure track academic job?

EDIT: Pointer to a follow-up question asked by @gerrit: How many PhD students does a typical STEM professor graduate during their entire career?

Just looked up some numbers for Germany:

Some of the tables show only overall numbers, and no details for maths. But I think that this result is influenced by the fact that the majority of chemistry and biology students go on for a PhD (though I guess that a non-negligible fraction leaves for industry [slightly] before finishing the PhD - which after all may not be that different from doing a PhD in order to get a better entrance position in industry).

It's a shiny info-gram, but I think there is a lot wrong with it:

That being said, I do think that there is a problem. If we assume a reasonably stable system (number of professors in a discipline stays more or less constant), then every tenured professor is in average allowed to see one of her/his students through to also become a tenured professor. Given that many tenured professors (at least here in Europe) maintain groups of 15+ PhD students at a time, I is pretty obvious even without digging into the data too much that the job market for professors is insanely competitive (which, incidentally, captures my personal experience hunting for tenure-track positions pretty well).

An article in Physics World has more information, and appears to be the source of the figure in question (I'm not entirely sure if it is the original source, as the article draws it data from elsewhere). The article is available to subscribers, and the full citation is:

It appears to be presently mirrored here, and my information is drawn from the mirror. It answers some questions on data sources that were lost when the image got its own life without proper context. Data are for STEM fields, and are relevant for the United Kingdom. The figure caption reads:

Transition points in typical academic scientific careers following a PhD. Based on data from the Higher Education Funding Council for England, the Research Base Funders Forum and the Higher Education Statistics Agency’s annual “Destinations of leavers from higher education” survey.

Statistics suggest that the vast majority of people who complete science PhDs will never obtain a permanent academic post. This is vividly illustrated in a diagram published in 2010 by the Royal Society as part of a report on the future of scientific careers in the UK (figure 1). Drawing on data from various UK sources, the diagram follows a “typical academic career” through a series of post- PhD transition points, when large numbers of people leave the university environment for careers in, say, government or industrial research. These data show that less than 0.5% of science PhD students will ever become full professors, while just 3.5% will obtain lower-ranking permanent positions as research staff at universities.

For physicists, that 3.5% figure is probably a little low. Slightly older data collected by the Institute of Physics and the US National Science Foundation suggest that the fraction of physics PhD students who obtain permanent academic jobs has historically hovered between 10 and 20%.

Indeed, according to an August 2012 survey carried out by the American Institute of Physics (AIP), nearly half (46%) of new physics PhD stu- dents at US institutions want to work in a university. The next most popular career plan among those surveyed, attracting 18% of responses, was “unsure”.

For more information, the article points to the UK group Vitae, UK science advocacy group Science is Vital, and the US NSF Statistics page.

So, for physics, it appears between ¼–½ of PhD students who want to get permanent academic positions, ultimately succeed in doing so. That's a quite different figure than 0.5% (but still problematic, as the article discusses in some detail).

Under stable situation, this probably can always be approximated by dividing the number of professor positions by the number of the PhD student positions, and normally makes numbers below 10 %. Same way you can calculate your chances of getting any other reputable, sufficiently well paid position below professor.

Apart lots of hard work, making to professors also requires a great deal of success. Counting on this is same as counting on getting a gold medal in Olympics: somebody does, but if this is the only your reason to participate, be ready for disappointments.

Another related data point quoted from the article "The disposable academic" in the Economist.

Indeed, the production of PhDs has far outstripped demand for university lecturers. In a recent book, Andrew Hacker and Claudia Dreifus, an academic and a journalist, report that America produced more than 100,000 doctoral degrees between 2005 and 2009. In the same period there were just 16,000 new professorships. Using PhD students to do much of the undergraduate teaching cuts the number of full-time jobs. Even in Canada, where the output of PhD graduates has grown relatively modestly, universities conferred 4,800 doctorate degrees in 2007 but hired just 2,616 new full-time professors. Only a few fast-developing countries, such as Brazil and China, now seem short of PhDs.

The ratio of doctoral graduates to new professorships reported here (16% for the U.S. figures, 54.5% for Canada) is orders of magnitude higher than the statistics quoted in the question (0.45%).

(Perhaps there is some semantic difference in what "professor" is interpreted as, perhaps having a stricter meaning in the UK -- suggested by Mark Meckes in his comment -- as being something closer to having an endowed chair.)

Not the answer you're looking for? Browse other questions tagged phd professorship career-path tenure-track .

-1
On average what is the likelihood that a research fellow will eventually become a lecturer or an assistant professor?
115
Why do students go for a PhD even when chances of getting academic jobs on its completion are slim?
93
What makes academic failure different from failure in another career?
50
Is it still possible to get a decent job in academia (specifically physics) nowadays?
37
Left academia for a job with a publishing company. Is it normal to feel guilty or "settled" about a decision? How to overcome the feeling?
36
What is the hardest part of transitioning from a PhD to a full-time career in academia?
15
Why do people in the United States pay for master's degree in areas where PhDs exist?
21
What percentage of phds in math actually get a tenure track academic job?
8
Why are some PhD holders unable to become professors?
21
Going back to do a Postdoc at 35?
See more linked questions

23
What if a faculty member is not successful in obtaining the summer salary from a funding agency?
12
How many PhD students does a typical STEM professor graduate during their entire career?
2
Do people need to have their PhDs at Harvard to get tenure at MIT (and vice versa) in STEM fields?
4
Non academic career for PhD in Biology
1
The importance of credentials in pursuing an academic career in pure mathematics
9
What fraction of STEM PhD graduates end up in jobs that require a PhD?