For example, how might a professor's academic reputation be impacted by publicly expressing views that support dictatorships (and other type of politicians) and their established crimes and violation of human rights?

First, academic freedom as it is commonly understood does not refer to one's views and publicly stated opinions, but to the freedom in which they conduct teaching in the classroom. The reference in US is the 1940 Statement of Principles on Academic Freedom and Tenure stating that

But as a rule, academics do not get special treatment outside of the classroom with regards to freedom of speech. It's certainly not the case in the US, and I am not aware of any other country where it might be the case.

Now, regarding the impact of unpopular or offensive views on reputation, it will heavily depend on your colleagues! I personally find that, while freedom of speech is highly valued in academic circles in general, Academia as a system is a rather conservative institution and I suspect you would not find much more sympathy for extreme views than in any other workplace.

NB: Academic freedom is also used to refer to a US jurisprudence applying to universities and colleges; in that sense, it is unrelated to rights and duties of an individual teacher.

For propagating unpopular view (which can be considered offensive) a professor may lose a position (see e.g. James Watson's case). And in general, sensitive topics (e.g. like gender and ethnicity) may be risky, regardless of the scientific value of a statement one is making.

Moreover, sometimes there is a particular ban on some ideologies (e.g. propagation of Nazism in many European countries). However, it this case it is (usually) not a limitation on academic research, but only on political activity. (Similarly, "encouraging or assisting crime" is an offence and it does limit what one can say.)

As a side note, a humoristic slide from a presentation Beauty and the beast at the 2nd Offtopicarium: 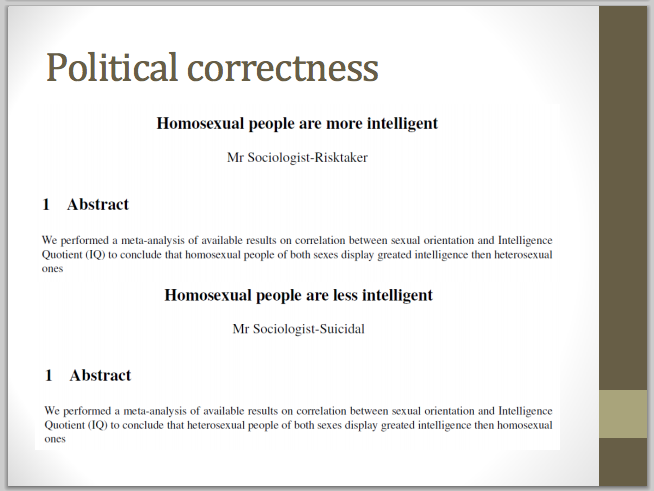 In addition to getting flak from your colleagues, some views might also get you fired or forced out of your position. For example, if you publicly state that the best solution for Africa is to drop a few nukes, the university might force you to resign.

I think what is important is that you can provide rational arguments for your opinion, as science is based on facts (and the interpretation of those facts).

Not the answer you're looking for? Browse other questions tagged professors academic-freedom or ask your own question.

15
Responsibilities of instructors to students when teaching controversial subjects
5
When should some research be censored/blocked due to social implication concerns?
3
Is having a personal blog that addresses controversial political topics possibly damaging to an academic career?

23
How to address a professor that makes offensive comments (that they don't realize are offensive)?
7
Academic rank equivalence between the UK and the US systems
8
Effect of offensive speech online on grad student life
18
What are the perks of being a tenured professor at U.S. universities, besides having academic freedom?
6
Academic Freedom for students re: advisors and solo papers?
5
To what extent might a non-faculty staff member expect — or demand — academic freedom?
15
What is “academic freedom”, when so many professors and post-docs do only the research that is being funded by external agencies?
45
How can I convince my department that I have the academic freedom to select textbooks and use multiple-choice tests in my courses?