Why do strict designs of theses exist?

Why do many universities require strict format on theses, when the most important thing in them is the content? A beautiful design will make a good thesis better, and a bad one worse. The work can be creative and practical at the same time, and as long as the latter is guaranteed, why restrict the former? If academia is a place for creativity and logicality, then where are the creativity and logicality in strict designs?

Note, it is practical to have a nice design.

Related: Is beautifying a dissertation looked upon unfavourably by the examiners?

Why do many universities require strict format on theses,

Actually, sometimes the requirement is not as strict as you would think, and they do accept some variety. Also, if they provide a template for you to use, that's not the same as not accepting anything that diverges from it.

when the most important thing in them is the content?

A beautiful design will make a good thesis better, and a bad one worse. As long as the content is guaranteed by the writer, why restrict their desire to make their work, at the very least, clearer?

Your question comes off as being rather self-centered. The university is (or may be) trying to make a collection of theses beautiful, not a single one. Don't publishers have series of books or journals with uniform design? Don't streets have rows of buildings with uniform or uniformly-changing design? ... and those streets in which every person built their own house, according to their own means, with different architects who have no sense of context and are wrapped up in their own ego (or with no architect and just some construction company just putting up whatever is currently cheap and fashionable) - are these the beautiful streets? Rarely.

If academia is a place for creativity and logicality

Logicality? Ok, my friend, you are clearly not ready to graduate if that's your view of academia. You need to "bake" in there for a while longer and lose some of this naivete of yours...

where are the creativity and logicality in strict designs?

I think I've suggested a reasonable argument as to why a university might want a uniform design. Well, it's either that or some administrator deciding on that arbitrarily, the same way the government has a bunch of standard forms. Which is it? Who knows.

Indeed, the most important thing in a thesis is the content. But not everybody who has to write a thesis is skilled in graphic design, formatting or typesetting and therefore, if given free rein, the final formatting might well be pretty awful.

Furthermore, uniformity in theses undoubtedly helps those marking them, by ensuring all the content is in the same place in every thesis (for example, there is a title page with all the student's information, an abstract, table of contents etc). This is particularly important for things like bachelor's theses where one person will probably be marking more than one submission.

Finally, what constitutes a beautiful design may well be interpreted as ugly by someone else, so by having uniform formatting, the chance of unconscious (or conscious) bias against the work due to its appearance is reduced.

In short: we shouldn't judge a book by its cover.

When part of your job is to be a reading a lot of some particular media (which could be books, journal articles, web sites, or theses), it really helps to have a fixed format that you can depend on. If I know where the summary, conclusions, methods, contacts, etc. are, it saves a lot of time that would otherwise be spent trying to decode the format for each individual paper. I can prioritize, determine what parts to focus on, where to start, what to skim, where to flip if I have questions midstream, etc. Trying to read an article in a wildly nonstandard format may take twice as long or longer.

My university in Australia is strict about exactly one thing when it comes the thesis format and the reason for that one thing is well known.

The only thing they require are the margins to follow their rules. If the margins do not follow the rule, in particular the inner-margin being too small, then it may not be possible to have it bound at the facilities the university uses for printing.

I will quote from my answer in the linked question:

When I had to write my first thesis, the dean made a gathering and told everyone something like "please understand that the university standard is written so they could reject terribly formatted theses, take those guidelines with a grain of salt". He told us that the default LaTeX style will be better than the guidelines and we can surely ignore the Times New Roman requirement.

Our university has guidelines that I think is bad. They seem to be written with zero thought put into. Like the default settings from MS Word typed down as guidelines. I later went to another faculty to learn more stuff. On this faculty it was known that the rules are loved and everything is strict, every thesis has to adhere to every rule. I ignored the rules about margins, fonts, figures and other stuff that I found to be wrong. I just handed it in with the thought "if they reject it, I already have another MSc anyways". It went through without a single comment on formatting.

Your mileage may vary.

The secretary who receives the theses has limited time to check the formatting in all the theses. The examiner is asked to read the thesis because they are an expert in the field. I don't think they are burdened with even knowing the guidelines.

I've seen a handful of different commissions evaluating theses. There was only a two cases where the reviewer commented on the formatting.

The first case had the following formatting flaws outlined by the reviewer:

This work is really thick, it has more than a hundred pages. It includes whole three title pages, two of those thrown somewhere in the middle. It also contains two tables of contents, yet none of them is at the start where they should be.

I saw this work myself and it was atrocious. The chosen font had characters missing and those were replaced by a fallback font that made those characters visibly bigger and thinner. There were endless sequences of uncommented figures (tables, images, formulas) that had their purpose hidden from the reader. I'd probably throw it in the bin if it was given to me for a review. This is a work that should've been refused simply because of formatting...

And then every f-k on the pre-screening committee suddenly had their very important opinion on some font sizing or line spacing. 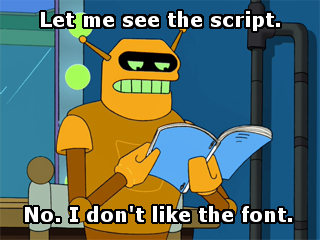 And then some bureaucrats at the office started requiring this and that all of a sudden (yes, only then, even though I had tried getting the formatting requirements out of them before, to no avail). Change the first page according to this... completely replace the second page according to that... the table of content should be like whatever... etc. etc. "Why didn't you tell me there are such requirements if there are such requirements?? - Well, they are not requirements, just common sense and logic, of course you have to do this and that!"

Some changes (like font changes) were trivial to make, others not so much - in any case, had to abandon whatever I was doing and spend time hacking at the LaTeX template. Occasionally after the changes were made I had to print out several copies of that 100+ pages monstrosity of mine and distribute among the committee (yes, again, yes, for the n-th time, yes, for stylistic reasons only).

Does the above really look more appealing than having strict requirements in advance?

Not the answer you're looking for? Browse other questions tagged thesis etiquette formatting design .

42
Is beautifying a dissertation looked upon unfavourably by the examiners?

5
Search all Theses online
35
What are your thoughts on epigraphs in theses?
20
Why do US universities have strict formatting requirements for dissertations?
18
Gamification for theses and papers
4
Questionable content in student's theses
1
Use of theses after their completion
1
Theses are exercises, rather than "full work"?