Where am I supposed to report a broken DOI?

Where am I supposed to report a broken DOI? To https://www.doi.org/, to the DOI registration agency that issued the DOI, to whoever is responsible for the website to which the DOI points to, or to somebody else? 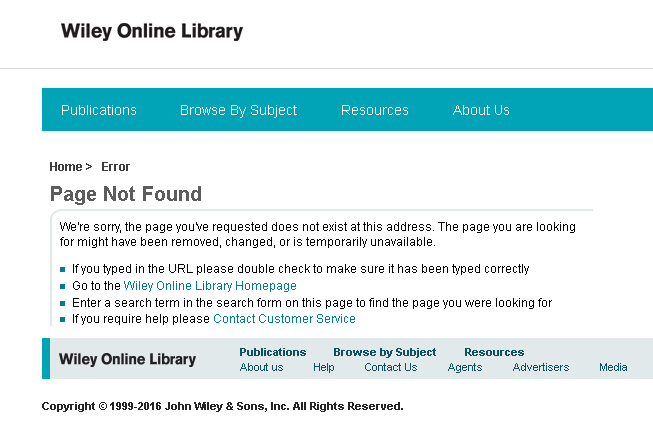 It's not likely that the DOI itself is broken. However, a number of things might be happening to prevent you access to the material (I'll assume it's an article) or, more commonly, human error is at play. First, make sure that there's been no change to your the proxy settings, firewall or security settings on your computer. Sometimes, these settings return a "DOI not working" error.

If you're sure that there's nothing wrong with your system (say because you're accessing a DOI for an article from the same issue of the journal), then I suggest that you inform the journal about your error. The web staff of a journal are able to respond to these reports rather quickly. They'll also be able to determine whether the result is due to a coding error or an editing error. In one case just recently, we caught an error in the DOI from being published on the manuscript. The error was due to an intern who was unfamiliar with copyediting notations on the galleys. (As I said, human error.)

I don't suggest that you report to doi.org. They'll collect information, but pass it on to the journal and may miss something material. Contacting the journal is more efficient. Finally, contacting the journal will also allow them to send you a copy of the article you wanted to access, while you wait for them to correct the issue.

PS. I remember a while back when there was a DOI "blackout". None of the DOIs for our articles would work. We were swamped with requests. Our webteam went nuts looking for the error. It turns out that this was a human error issue, but at the DNS level. I'm not a computer expert but the head of our web team explained it to us like this: "Someone forgot to renew the license for the dx.doi.org account."

I want to begin by saying that in this case, I believe @Blue-FootedBoobysBlueFeet is correct in that this is Wiley's problem, not the International DOI Foundation's problem. Chiefly because the DOI is redirecting to Wiley's site - which implies that the problem likely stems from a broken/erroneous redirect on their end.

That being said, for completeness I also want to add that a truly broken DOI should return a page that looks something like this: 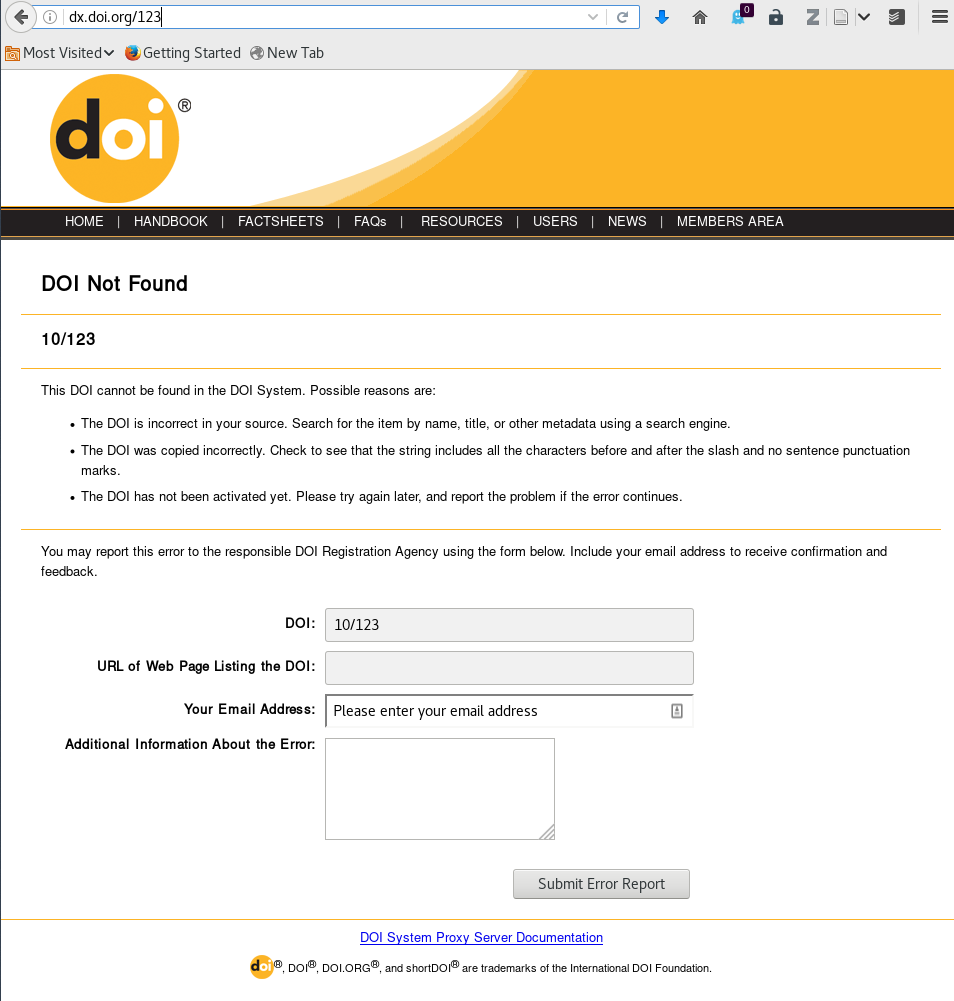 This would be reported to the International DOI Foundation, as it indicates something is fundamentally broken with the issuing Registration Agency.

The first thing you want to do is assess at what stage the error is occuring.

If the DOI is getting correctly resolved to a appropriate page on the journal's site, but the content of that page is missing, that indicates that the DOI itself is valid, but the publisher moved around pages without updating the DOI resolution mechanism. In that case, you need to contact the publisher, or the publisher's web team and inform them of the DOI that's not resolving properly.

If it's doi.org itself which is giving you an error message, then in all likelihood there's something wrong with the DOI resolution process itself. This could be a number of issues:

One is that the DOI just isn't valid yet. There's been issues in the past with press releases from certain journals - they have the DOI for the article, but due to administrative issues the DOI doesn't get turned on until later in the week. (In this situation, you could emailing the journal and telling them to get their act together, but it may or may not help.)

The other is that the DOI was valid in the past, but for some reason has been turned of. The whole point of DOIs is to avoid this situation, though, so this is highly unlikely.

The most likely explanation is that wherever you got the DOI from made a mistake: if there's a typo in the DOI, it won't resolve to anything. The first thing to do is go back to the place you got it from, and double check that you haven't made a typo yourself.

The other thing to do is to do it the old fashion way: search for the article by author name and title. Once you find it on the publisher's website, take a look at the DOI and see if there's an obvious typo that could have been made. (e.g. if the DOI is missing a digit). If so, don't bother to inform the destination journal - if anything it's the source of the DOI that would need to be informed.

Another approach is to search Google or the like for the DOI - it may give you the proper destination page, or might indicate that it's only a single source that has that DOI (in which case it's likely a typo.) Or it might give you a better idea of where/how the DOI is being used.

Your case is somewhat interesting, as the DOI is correctly being resolved to the Wiley site, but it's not a particular page which is missing, but rather it's a general search result. That is, doi.org is able to recognize things as a Wiley DOI, but passes the final bit of resolution off to Wiley, who then can't recognize it. So your situation is probably more an issue with DOI resolution, and the steps for that would be a good start.

Multiple DOIs for the same item aren't great, but they can be handled. However, it's certainly Wiley's responsibility to coordinate with Elsevier and doi.org to make sure that the old DOIs continue to work. It looks like doi.org is doing the correct thing by passing them to Wiley, but Wiley needs to update their DOI resolution engine in order to correctly point the old DOI at the correct new location. It's definitely Wiley you need to contact, probably through the contact link you got at the error page.

Not the answer you're looking for? Browse other questions tagged online-resource doi or ask your own question.

3
Published and unpublished dissertation; DOI assignment
1
Does this ProQuest “docview” URL include a DOI?
5
Persistent URL for each DOI pointing to open access papers when available
13
Are there free DOI generation services?
6
Persistent website with a DOI
1
Is depositing a document already available online in ResearchGate a problem?
2
Get DOI for publication
21
How do I handle inaccessible DOIs when citing papers?
4
Published article with Inactive DOI
4
Can I upload a national report which I reference in a paper to a preprint server so it has a permanent location and/or DOI rather than a URL?