How to obtain average and total impact factor of publications for an academic?

For a while ResearchGate provided something called impact points. It was calculated as the sum of the impact factors of all the publications an academic had. For example, if an author had been an author on four papers with impact factors 0, 2, 4, and 3. They would have 0 + 2 + 4 + 3 = 9 impact points. They've recently stopped reporting this value because supposedly they no longer believe impact factors are valid indicators of an individual article (of course, as a side note, they continue to report their own mysterious ResearchGate points which in addition to publications also weights things largely irrelevant to the research community, but relevant to encouraging behaviour on the site that they desire).

If you also knew the number of publications someone had, you could also quickly determine their average impact factor per publication.

I found the combination of average impact factor and the sum of impact factors to be a really useful metric when getting a quick feel for an academic's publication track record. In addition, I think that impact points seemed to provide a reasonable starting point for discussing some of the trade-offs in publication strategies between quality/significance and quantity.

Given that this site includes many who are mindful of the problems with metrics for evaluating academic output, allow me to justify why I like the combination of average impact factor per paper and the sum of impact factors (i.e., impact points):

Probably the biggest issue with impact points is that some authors have publications with many more co-authors, or have more or less first-author papers, although this is less of an issue if you focus on average impact factor per paper.

So my question is, given that ResearchGate has stopped reporting impact points, is there an alternative provider where you can quickly obtain the sum or average impact factor of the publications of a given academic?

I'm not aware of any specific tools like ResearchGate which provide an average impact factor for a researcher - maybe others know of something? However, you could fairly painlessly generate the average SJR/SNIP value for a researcher through SciVal in Scopus.

Back to your specific question, you could use InCites to follow a similar process as above to calculate a researchers average Journal Impact Factor (Thompson Reuters) however it's not as straightforward as SciVal. As far as I know, you can't generate an XLS list of journals a researcher has published in within InCites (so you would need to get this list somewhere else). You can however export a list of journals from InCites with their impact factors but you would then need to link your researchers list of journals with the incites list to collate the relevant impact factors. you could use excel VLOOKUP to do this and then calculate the average. This is a lot more effort though, so it would depend why you want this average measure of research impact in the first place and whether it might be enough to just use the scopus impact metrics.

An alternative to looking at impact points that indexes a similar concept is citations in the last full year. This can readily be obtained for anyone with a Google Scholar profile. Author search on Scopus also shows it. 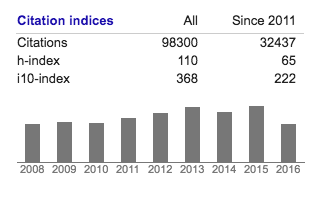 Impact factor is essentially the mean number of citations per article per year in a given journal (where for example if the year for gathering citations was 2008, the publication years would be 2006 and 2007). But there is also a five year impact factor which extends the number of years articles are considered (e.g., 2003-2007). Depending on the life cycle of citations in a given field and journal, expanding the window of time for considering articles may alter the estimate of mean citations per year. My main point is that the underlying construct that is being measured is mean citations per article per year.

Thus, in a rough sense, the impact factor provides a rough guide to how many citations per year an author can expect from a given article published in a journal with a given impact factor. Of course, the distribution of citations in articles is positively skewed, but as we aggregate over many papers, the central limit theorem will begin to kick in.

Thus, citations per year in the previous year is in some senses addressing the same concept as impact points (i.e., the sum of the journal impact factors of the papers that an author has published in). In particular, it doesn't double load on years as an academic (i.e., total citations double loads for both the time you had to publish more articles and time that those publications have had to accrue citations). There are of course a few differences:

As an aside, all citation based metrics including impact factors are contingent on the database or articles used to specify articles and used to source citations. Google Scholar is quite inclusive. ISI Impact Factor has greater quality control and is less inclusive. So, from casual observation, It seems like Google Scholar picks up a multiple of between 2 and 5 times more citations than ISI or Scopus. Thus, any comparisons need to be mindful of that.

Not the answer you're looking for? Browse other questions tagged bibliometrics impact-factor .

15
What is a fair metric for assessing the citation impact of journals across disciplines?
10
Are alternative metrics taken seriously by hiring committies?
30
How does PLOS ONE maintain its impact factor?
15
Should self-citations be excluded when calculating the h-index?
3
How to estimate standard error of journal impact factor based on impact factor and number of citable papers?
2
Waiting times and hurdles between inclusion in ESCI and getting an impact factor?