Inspired by the question Does the term “science” encompass humanities and the social sciences?, I would like to ask a question that has been in my mind for decades.

Does "Science" include Mathematics? Or, put in another way, is Mathematics part of Science?

When people say STEM, do they mean Math is separate from Science? Or they just say it for the sake of convenience?

If this distinction matters in a given case, then you'll have to discuss it explicitly, since you can never assume everyone will agree by default.

If Math is part of science, what kind of science is it?

The most compelling answer I've heard is that it is a formal science. However, this terminology is somewhat obscure, and it is certainly not a consensus answer to your question.

When people say STEM, do they mean Math is separate from Science?

I don't think the intention is to assert that they are definitely separate, but rather just to have an inclusive acronym we can all agree on.

The first definition of science that Merriam-Webster gives is:

: knowledge about or study of the natural world based on facts learned through experiments and observation

Math doesn't investigate the natural world and thus isn't a science according to that definition.

In How to Think Straight About Psychology Keith E. Stanovich defines 3 main traits of science.

Three of the most important are that (1) science employs methods of systematic empiricism; (2) it aims for knowledge that is publicly verifiable; and (3) it seeks problems that are empirically solvable and that yield testable theories (the subject of the next chapter).

Unfortunately the duplicate in mathematics hasn't got good answers, so I will give it a try.

The answer is: Mu.
It means that the question must be unasked or that neither "yes" nor "no" is right or wrong.

Mathematics is examining the properties of consistent mental models or structures. It started with numbers and geometric figures and it was used for applications (counting, area calculation) from the beginning. It would not be completely wrong to name it "number philosophy" although it has expanded greatly and examines now a innumer...a very great number of concepts.

An example to show the difference to science: Let's say a scientist would try to prove the Pythagorean theoreom without mathematics. He would find out that if we draw squares on the side of a right-angled triangle, the smaller ones look like they have the same area as the big one. He would experiment with it and while they really look very similar, he will never achieve an equal result. The cuts are not completely straight, the material bends, the lines have always some extent. Even if he succeeds in determining that for all tested right triangles the values are mostly equal, he/she can never be sure that it will stay so.

A mathematician can prove that the sides are exactly equal. This is possible because s/he does not use real-world modelling and is therefore not limited by their applications. But while it is not the real-world, it still allows discoveries. It is not self-evident that right triangles have this interesting property.

Mathematics is a necessary part of science because it is a building block for any precise models we need to refine the work. Physical values are models by numbers (or matrices/tensors) and a concept of a dimension. In higher physics countle...a big number of mathematical models are used.

For the reason that mathematicians and other scientists are sharing many mental similarities (curiosity, challenging matters of course and relishing hard, but interesting problems) their faculties are often joined together which results in the STEM field.

So mathematics is "sciency".

But...it is not really a science because it is more fundamental: It does not require knowledge or experience from other scientific fields. If a mathematician travels back in time 20 000 years (the humans were on a comparable intelligence level as today) he would be able to teach a bright kid modern mathematics which is impossible for modern science because there is no infrastructure to replicate experiments. Mathematics also has no room for error or reevaluation. Once the axioms are set (yes, if the axioms change, the result can change), a result is valid for all times. Mathematics is also used massively outside science including the humanities.

So mathematics is not a science.

On my journey through Computer Science, Machine Learning / AI, and Cryptography I've often wondered the same thing. Here's the way I currently see the interactions between math and its related disciplines through the branches of mathematics that I've studied: 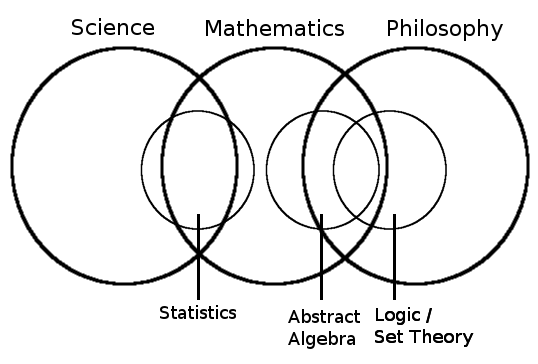 I imagine there's a fair amount of subjectivity here, and that other branches of mathematics will have their own unique place on the Venn diagram.

The answer to this question is perhaps not as clear-cut as it might appear, i.e. the issue is not merely definitional.

Some (for example the physicist Roger Penrose, in his book `The Emperor's New Mind') believe that mathematical structures exist in a non-physical, Platonic realm.

Conversely, the quantum physicist David Deutsch has claimed (notably in his book, `The Fabric of Reality') that, since the brains of mathematicians are physical objects, then the structures they can apprehend are constrained by the laws of physics (more specifically, to be computable by a quantum computer).

In `Where Mathematics Comes From', the cognitive linguists Lakoff and Nunez claim that, even if a transcendent Platonic mathematics existed, we would be unable to experience it, since our conceptions are analogised from our physical experience of space, force, motion etc.

Here is a quote from a recent article in the Notices of the American Mathematical Society by AMS President Robert Bryant: People say that mathematics is logical, but the logical aspect is only part of it. Mathematicians usually don’t proceed logically. They make guesses, see patterns, do experiments, develop beliefs. Almost nothing in that process is purely logical.

I'd personally say that this alone puts mathematics on a conceptually equivalent status to physics, but not everyone would agree with this.

Are you a Popperian falsificationist? Then you believe that only those statements that can be disproved by experiment can be classified as science, and as such, mathematics is not a science.

Of course, there are those that believe that mathematics is an experimental science, and the lab is the computer. If you are of this opinion, then math is a science in the Popperian sense, but most people think that software and hardware bugs are so common that this stance is untenable.

If you find Paul Feyerabend's epistemogical anarchism convincing, then you will claim that mathematics is a science, as it produces tangible value.

I personally wouldn't classify mathematics as a science. The best definition I can offer is mathematics is a set of techniques for thinking clearly about quantity and shape. But even that definition can be challenged with little effort.

When one says mathematics is not real, as compared to physics, I generally question the person about the reality of an electron. How does he know an electron is real? Ever seen one? Or guessed through models and measurements?

I long believed mathematics was not a science. However, parts of mathematics have become quite computational. Think about proofs for the 4-color theorem. Mathematics can teach about real-world problems, see the Pentium problem. And I am seduced by Alain Connes views on the existence of an

Take prime numbers, for example, which as far as I'm concerned, constitute a more stable reality than the material reality that surrounds us

So, along with the increasing use of some mathematics in nowadays data engineering (data science/big data buzz words), I am more and more convinced that large parts of mathematics can be considered science... at least no less that string theory (Why String Theory Is Not A Scientific Theory).

Not the answer you're looking for? Browse other questions tagged mathematics terminology science or ask your own question.

18
Does the term “science” encompass humanities and the social sciences?

7
How significantly does the salary amount for tenured faculty impact the quality of a deparment?
13
Does more knowledge enhance your chance of doing better and 'original' research (in mathematics)?
25
Is it common for an undergraduate thesis in pure mathematics to prove something new?
18
Does the term “science” encompass humanities and the social sciences?
4
What is the difference between an explanation and an interpretation?
11
How do academics in humanities such as philosophy apply mathematics or physics in their discipline?
7
How to communicate realistic expectations for science faculty research to administration
4
Are physics and natural sciences considered liberal arts?