Can you get hired where you received your phd?

I really like the institution where I'm working on my PhD, and I enjoy the city that I live in. I have shown that I am a strong research, and I am really starting to make a name for myself. I was wondering if people ever really get recruited for a tenure position at the institution where the received their PhD. (I don't go to one of the top 5 universities where they kind of have no choice but to recruit from within.)

Yes, but it is rare, for most schools.

It is usually frowned upon, however, the top schools have to hire from somewhere so it is common for them to at least swap graduates. My anecdotal evidence is that low ranked universities also tend to hire a higher proportion of their own students.

A notable exception is MIT, where 39% of the CS professors received their PhD degrees from there. 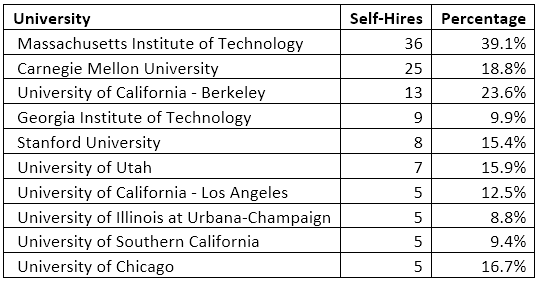 Attitudes towards a department hiring their own PhD students as tenured academics varies quite a bit across institutions and departments (from my observations as an Australian academic). For many it is discouraged, for others it is sometimes an advantage, and for others, it just takes an extended postdoc typically somewhere else in order to be competitive for a position.

There are a few general principles that are operating:

On the flipside, some departments value hiring their own PhD students.

One scenario that I've seen occur a few times is an academic getting a PhD from an institution, then spending a few years doing a Post Doc or lecturing position elsewhere before returning to the original institution to take a continuing position. This often satisfies many of the requirements of showing that you are an independent researcher.

Another scenario is working at the same university but in a different department. This is often applicable if your research is in anyway cross-disciplinary.

Also, my casual impression is that high ranking universities are somewhat less likely to hire their own PhDs for continuing academic appointments straight out of their PhD.

If you're interested in getting a continuing academic appointment at your PhD university, you should gather some more specific information. Look at where current academics in the department did their PhDs. If there are such academics see whether they left and came back or went straight through. If you can, try to find out about the politics of such appointments and whether they were purely on merit or whether they were supported by existing staff keen to build up an area. Talk to your PhD supervisor. Even better, if you're able to, talk to the head of department or someone else who is likely to be involved in hiring decisions.

Finally, academic appointments are very competitive and the frequency with which jobs come up at your level in your area and at a given institution may be low. For this reason alone, it pays to consider other universities. Even if you want to get a position at your own institution and your institution doesn't have a bias against hiring their own, you still need to be better than all the other applicants which include a much larger pool.

I was hired on a one year teaching/research contract at my institution even before my PhD corrections were ratified.

I ended up leaving halfway through (though saw out the rest of my teaching duties) for a 2.5 year research contract in a research centre I had my eye on the past year.

So it's definitely possible, but as to whether it'll be a tenure position, depends on your university. I'll put it this way, at my university, we had a tenured position come up in my department with a few very strong internal candidates who had PhDs from that university, and I mean very strong (big grants, books, tons of publications) apply. They didn't even get interviews.

Someone from overseas was hired, and I think at my old university in particular there is a want for 'international' talent.

Not the answer you're looking for? Browse other questions tagged job faculty-application tenure-track or ask your own question.

10
How can I transition from industry to academia without having a college degree?
6
For early researchers, how does the ranking of a university relate to future career in high ranked universities?
12
Breaking into research oriented tenure-track positions from teaching track
29
Backing down from a faculty position. Future career problems?
62
The position I applied for was advertised as Associate Professor with Tenure, but now they’re saying it’s tenure-track Associate Professor
3
Turning down an accepted tenure track for a better one?
1
Possibility of negotiating a better contract if I am offered an asst prof position?