How should one acknowledge a funding agency if it fulfils its obligations only partially?

I applied for funding of my project and it was approved.

When it came to spending money, this funding agency put constraints on some sorts of purchases (e.g. by putting unrealistically small limits for computer buys). This was not stated in the call for proposals.

The research along the proposed lines was done, with some degree of external support. How should one acknowledge the original funding agency provided that a significant degree of funds were not spent due to those suddenly introduced constraints and limits?

Since you did get support from your funding body, you will need to list it in the funding acknowledgements. This doesn't change with the fact that you have also gotten support from elsewhere. As profmartinez wrote, the proper term is to state that they provided partial support. Some researchers write "partly" exclusively in their funding acknowledgements, as their home institutions provide some level of support as well (offices, ...), which are not normally acknowledged.

The fact that your funding source provided less support than expected should not be written into the funding acknowledgements. Mentioning this somewhere would in the best case have no effect. In the worst case, it makes a bad impression both on you and the funding body. You have no ethical obligation to mention the quirks of their funding scheme, and under the "choose your battles wisely" premise, not mentioning the problem is the way to go. 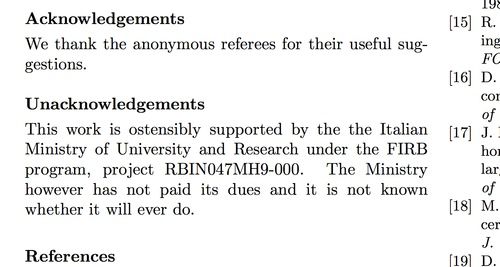 I think it is important to stress the fact that the funding agency, as irksome and bureaucratic as it may be,

(edit: see explanation below of what I mean by this)

Let me say it again: an organization gave you money that was theirs and that they didn't have to give you. Maybe they were annoying. Maybe they didn't give you as much money as you hoped they would. Maybe they imposed rules and restrictions that you disagreed with or that seemed unreasonable to you. The fact remains, they willingly and voluntarily parted with their money and let you spend some of it. All they are asking for in return is that you give them an acknowledgement. Is that really so hard? Just write the acknowledgement they are asking for, in the precise language they specified, not a word less or more. Honestly, writing anything else sounds extremely childish and unprofessional to me

Edit: some people seem to be reacting negatively to my use of the term "free money", so let me clarify what I meant. The point is that this money that was given to OP by a funding agency comes with much fewer strings attached than money typically exchanged between two parties as part of a normal economic transaction. With grants, there are usually no specific deliverables, nor a strict schedule for the creation of a specific product or output of the research. There are some well-defined restrictions on what the money can be used for, and an expectation of an annual report and of a minimal amount of recognition on the part of the recipient in the form of an acknowledgement, and that's basically it.

We in academia are used to these sorts of arrangements and don't think there's anything unusual about them, but it's important to remember that to people outside academia, who can only dream of being given any amount of money (let alone many thousands of dollars) by anyone under such loose terms, this can appear downright amazing, and is perceived, to a very good degree of approximation, as "free money".

Finally, I googled to see if there's a technical definition of the term "free money". There doesn't seem to be a completely standard definition, but at least Businessdictionary.com defines it as

Drawbacks, grants, subsidies, tax-breaks, and other such means employed to keep some firms afloat in order to (1) save jobs in depressed areas, (2) protect certain industries such as agriculture or defense, and/or (3) promote research and development.

so I think my usage is within the accepted meaning number (3), if one makes allowance for the academic context of the current discussion.

I was having a somewhat similar issue with the acknowledgements section of my Ph.D. thesis. "Fortunately" for me, my issue was with my university itself so I could get easily get away with just skipping the customary acknowledgement. This is what got me thinking about the subject, anyway.

Ok, so here's the thing: You have conflicting goals:

The answer really depends on how much each of these is important to you (and on who is going to be the audience of the research paper/report/thesis you're working on.)

Some - not necessarily compatible - elements of an approach could include:

But again, the most important thing is evaluating the relative importance of each potential motivations/objectives and how the different courses of action satisfy or frustrate them.

When your university's Sponsored Research Projects office signs a contract with the NSF or other funding agencies, then these are typically dozens of pages long and reference rules and regulations that together are likely hundreds or thousands of pages. I would venture the (educated) guess that less than 1% of grant recipients have ever read even a small fraction of those.

Whether the problems you encountered were due to some of these is of course unclear from the question. But let me assume that they were, then this is no different to you breaking a law you didn't know of, and going to jail -- annoying, but ultimately your fault.

In the current case, my take is that you did get money. You can be passive aggressive about it and make a fuss in public, at the cost of likely not getting any future funding. Or you can acknowledge the fact that they did fund your work, and publicly state so in your paper. The latter seems to me to be the more productive approach.

Not the answer you're looking for? Browse other questions tagged funding or ask your own question.

3
For an industry-sponsored project, should one apply for IRB approval before or after accepting the funding?
3
Do students needs to be specifically mentioned on grant proposals for projects funded by government agencies in the US?
3
How should I put my funding history in CV/cover letter?
3
How should I state my affiliation and funding if I am not funded and have no academic affiliation?
2
How to justify an application for research funding if the only cost is my own academic or intellectual labour (without any equipments) etc?