Is there any guide or organisation solution for increasing utilization of laboratory and lab equipment?

We obtained a report for the last academic year. A shocking revelation was that the capacity utilization* of lab equipment, laboratories, instruments and machines is only 37%. Everyone seems to be happy with this result, most of the comments are that science can't be lucrative and researchers cannot be forced to work with already existing equipment. If they want to expand research and buy a new machine (even if we have 3 already) that should be allowed. "Your grant your rules".

Is there any organization method to overcome this "abeyance" of overall facilities at faculty?

*Utilization was calculated by time and resources being used, versus number of publications and number of employees (students, professors, researchers).

The U.S. Department of Energy has a system of user facilities. Access to these facilities requires an application and scheduling. Access is typically free. At least some of these facilities reach 100% utilization. Each tool in each facility may have its own rules. These are often listed on websites. Facilities are incentivized to reach their utilization targets with funding.

Unfortunately, the 37% capacity utilization number is essentially meaningless on its own, because it does not directly relate to the actual metric that one might wish to optimize.

When attempting to improve efficiency, it's important to have a precise understanding of what the ultimate metric is that it being maximized. In a university research setting, the metric being maximized is not utilization of equipment, but rather something regarding research being accomplished and effective use of grant money. To maximize such metrics, it's actually important that some equipment be idle some fraction of the time.

The problem is, research projects typically have highly uneven and unpredictable resource utilization profiles. For example, my collaborators will often have 1-2 day bursts of flow cytometer use, in which they use a $200K machine for an hour or so every few hours, followed by a weeks-long gap while they prepare the next experiment. It's very difficult to interleave usage during such bursts without distorting somebody's experimental plans, and an experiment may need to be started several days before the flow cytometer is first run. Counterintuitively, this means that overall experimental efficiency demands that flow cytometers stand idle most of the time.

An even more extreme example is common tools like pipettes or screwdrivers: if anyone ever needs to spend more than a few seconds looking for such a tool, then operations are clearly inefficient. As a professor of mine once told me: "If you can't just reach out and pick up the screwdriver you need, you don't have enough screwdrivers." This means that such common tools must have exceedingly low capacity utilization in order to used efficiently as part of the larger workflow.

That same professor, on the other hand, now runs an operation in which an automated high-throughput mass spectrometer is carefully scheduled to run 24 hours a day, since it is the key high-value bottleneck of an entire pipeline. In that case, efficiency means 100% utilization (but also that when they have grown enough, they will probably add another mass spectrometer).

Bottom line: if you want to improve efficiency, knowing the utilization of equipment is a useful starting point, but it can only be properly interpreted in terms of the larger workflow in which that equipment is used.

Take my advice - invest in human hamster wheels to generate lab electricity, rather than buying it off the grid. So long as you make sure the wheels aren't too efficient, it should be possible to get most if not all of your researchers utilizing the equipment, 24hrs a day, 7 days a week. You may see a slight dip in the utilization of other lab equipment, but the high usage in both number and duration of use of hamster wheels should pull up the whole departmental average. 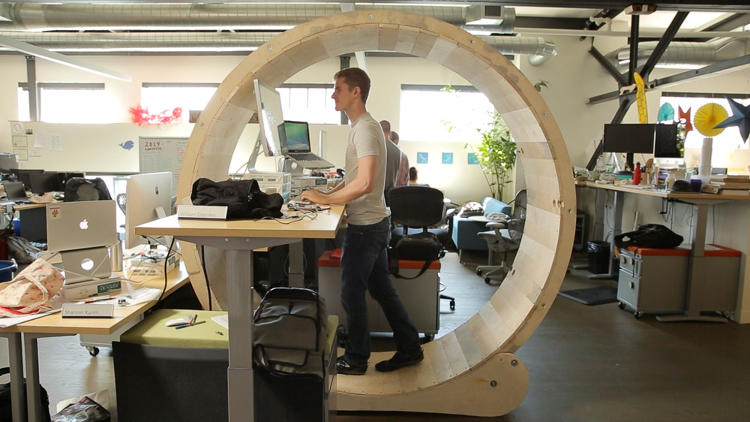 I am, of course, being facetious. A lab is not a factory that turns some arbitrary raw material into widgets en masse. Time and motion principles of labour management simply do not apply. If anything you want scientists using equipment less for the same amount of science published. In all seriousness, the only real machine whos utilization is worth tracking would be the coffee machine.

So, 37% may represent a perfectly good balance for these costs and as measure of utilisation it is not sufficiently informative in isolation.

Not the answer you're looking for? Browse other questions tagged research-process lab-management facilities-services or ask your own question.

11
Are there any acceptable reasons for omitting data in a publication (i.e. “data not shown”)?
6
Is there any difference between journals and conferences which charge money vs those which don't?
19
Are there any research careers except professorship for a person holding PhD in pure mathematics?
9
Are there any proposals to make sharing code and data with publications a requirement?
10
Practical strategies for increasing one's passion and excitement about research?
2
Is there a research exchange program for postdocs between UK and worldwide universities?
7
Are there any Books/Guides to developing researching skills for academia
2
Is there any concept of working paper in science and engineering?
1
Are there any online tool for translating a Russian-language PDF to English?