Is it acceptable to wear the same outfit every day?

I am a male graduate student in natural sciences at a public university. I want to simplify my life a little bit by wearing the same outfit (more or less) every day. (Obviously I would have multiple copies to be hygienic.) I tend to wear untucked casual button-downs with some casual khaki pants and sneakers. Would this be looked down upon by the faculty? I am not so worried about other graduate students, but I do not want to make a poor impression on the faculty. Any guidance on this would be much appreciated!

Of potential importance: I am TAing one class right now and will be taking two classes this upcoming semester.

Life can be simplified without resorting to wearing a set of uniforms. While uniform is the ultimate form of simplicity, when your are the only one doing it in a place that uniform is not a norm, people may perceive you wearing the same piece of clothes everyday even you change into a clean set daily. It's easy to explain it to an acquaintance, but difficult to clarify if a professor has decided that you're unkempt. They cannot really come up close and sniff you so visual clues are the only clues.

We can get the best of both world by simplifying the wardrobe while keeping the maximal versatility. One of the common concepts is capsule wardrobe. Here is an example: 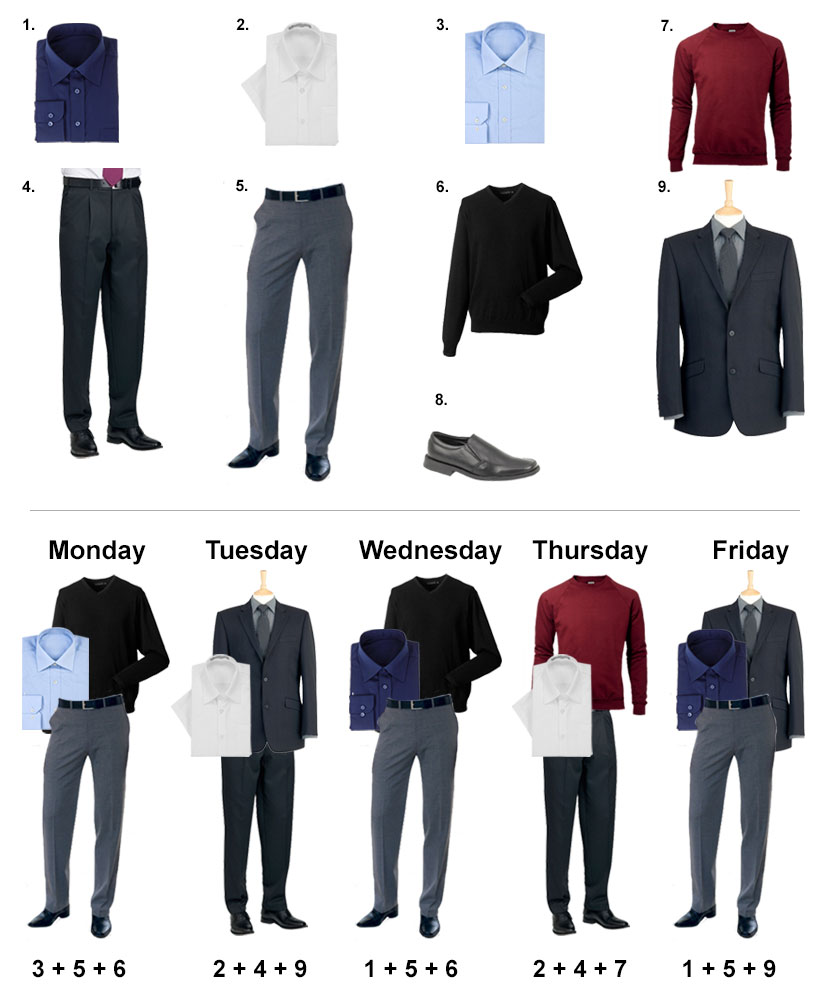 By using different combinations one can get different looks from Mon to Fri with only a few shirts and a couple pairs of pants.

Designing a capsule wardrobe does take time but it'd serve you well for a couple seasons or even longer. Tips to make one are available online. Here are some general points:

It's actually not that difficult. I tried it last year. I cleaned up my closet, and then just find some scheme online that I like and modify them to the colors and style that I wanted. So far I can pick out my clothes without even thinking about it and I never felt I'm wearing the same thing day to day.

One of my faculty colleagues who just received tenure (at my r1 university) has worn basically the same outfit (same colored button-down shirt with khaki trousers) for the past decade - from graduate school to his current position (he may have indeed been wearing this his entire life, but we only have data for the past decade). I believe his closet only has one type of shirt and trousers.

Aside from gentle ribs from others about his 'uniform', it's well tolerated by others as it's a minor eccentricity compared to some of the other faculty. Just be open to someone asking you if you: 1) have multiple shirts or a single shirt; 2) wash them regularly.

tldr: If it saves you money / brain-cycles / spoons / closet-space to wear the same uniform clothing every day, do it. It worked for Steve Jobs, it can work for you.

Fine print: There may be a gender factor as men in academia and industry who basically wear a uniform are well known but it is rare to encounter women who do the same. This requires more exploration.

I think the social norm in the US is to never wear the same clothes (or in your case, clothes that look the same) on two consecutive days, especially if you want to appear professional (or what passes for looking presentable in the academia). That being said, if you don't see your advisor or students on a daily basis, you might get away with it, as people may assume that did change your clothes on days when they didn't see you.

But really it is not difficult to have two or three different sets of outfit and "rotate" through them. As I've learned, people don't care about whether you washed your clothes before you wear them again two or three days later (as long as it isn't too dirty), as long as you change your clothes daily. An anecdote to illustrate how easy it can be: I once had a math professor who would wear almost the same plaid shirt everyday, except for the fact that all of the shirts are of different colors. I suspect that he just ordered every single color available for that one shirt he really liked.

I think the standards in academia are much looser than the standards in the business world. So bear in mind that when you get out of school and get a job -- assuming you get a non-teaching job -- you're going to have to upgrade your wardrobe.

Still, if people think you're wearing the same clothes for weeks at a stretch, some number will think that's distasteful. I think the simple solution is to have two or three different colors and alternate.

Personally, I have several white shirts and several blue shirts, and several dark blue pants and several gray pants (and I think one khaki). And I just make sure that when I change clothes, I put on a different color than I wore the day before.

Unless you have some reason why you want to look exactly the same every day -- you consider this an essential element of your personality or you swore an oath on your father's grave that you would always wear the same colors he was wearing on the day he died or whatever -- I just wouldn't. Many won't notice, and most who do won't care, but some number of people will thick you look grubby, and one of those might be someone whose opinion is important to you.

I think there are two issues to consider here:

Hmm, also, going by this PhD Comic, there's also dressing for the job you want. ;-)

Not the answer you're looking for? Browse other questions tagged graduate-school etiquette outward-appearance or ask your own question.

14
What is the minimum one should expect from the day-to-day supervisor?
8
Is it necessary to wear a white shirt inside the graduation gown for Masters degree graduation ceremony?
2
MS student in CS meeting advisor for the first time in person (USA). What should I wear? (male)
18
Is it significantly inappropriate to wear clothes bearing the name of University X, when working as an official employee at University Y?
1
Is It Acceptable to Contact the Professor of a Publicly Uploaded Lecture?
2
Contacting multiple potential supervisors at the same department?
1
What are the implications of submitting a paper to be graded and to arxiv preprint on the same day?
2
The Downsides of Doing Undergraduate, Masters, PhD at the same institution