Are professors allowed to accuse someone of cheating based on a general increase in test scores?

Let’s say a professor has seen that the average score for the midterm exam was a grade and a half higher than it was in previous years. Because of this he gained a reasonable suspicion of cheating (he has been teaching the course for several years in the same way and this is the first time he has received such high scores). He looked at the score distributions and found it to be bimodal: 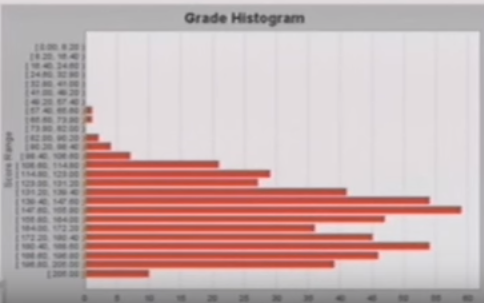 He went on to assume that, since this distribution wasn’t like his normal distribution he had received on his test scores in previous years, one third of all his students cheated on the mid-term. 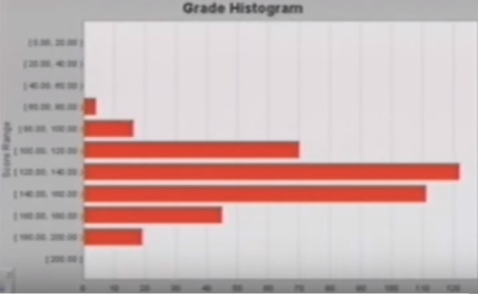 Now here comes the question, is it ethical and reasonable to assume that one third of the people in his class were cheating? Maybe the distributions were different and bimodial because some students studied harder (causing peak at better scores), while others didn’t (peak at lower scores). Are professors allowed to make everyone retake the test because of this data (even the ones who took it honestly). This punishment seems like he is punishing the supposed two thirds of the class that took it honestly.

PS: This didn't happen to me. I just heard about it from a friend.

First, as you already noted, the better scores and the bimodal distribution may have other reasons. For example:

Most importantly, the following thing is odd: It’s highly implausible that the rate of students who decide to cheat on their own increases by that amount from one year to the next. Thus, they would have to decide for cheating together or due to some common motivation. This in turn only makes sense if the cheating is a collaborative endeavour or if somebody is helping the cheaters.

Now, while such scenarios are not unthinkable, they are usually as likely as possible explanations that do not involve cheating (your mileage may vary depending on the circumstances). Moreover, even such a scenario happened, just repeating the exam is unlikely to solve it. Therefore the professor should first find out what actually happened.

So, the statistics may point at something being unusual, but without further investigations you cannot say that it’s cheating. Moreover, even if it is cheating, statistics can only tell you that it happened, put cannot point to any individual involved in it.

To address your individual questions:

The OP aknowledged in the comments that the question was sparked by a specific incident, the Richard Quinn case in UCF 2010.

Viewing the video, Quinn had not just Statistics, but both physical evidence and witnesses: a student had left at his office door a "test bank" answered, and many students communicated that other students were bragging about how they had gotten hold of the test bank and so had all the answers prior to the exam.

Moreover, Quinn didn't just "accuse the class of cheating": he had already negotiated with the school "full immunity" to those that will admit to the deed... At least 200 students admitted the cheating after they were offered the equivalent of full immunity.

I don't know the man and I have nothing to do with Florida, or with the US education system for that matter. But based on the information I found, the Quinn case certainly does not qualify as an example characteristic of the answer asked by the OP.

In short, per se, statistics is not sufficient to prove anything, but it can direct attention to finding more compelling evidence (which you may not know about at this stage).

That being said, I have seen enough variations of this sort in capability of cohorts that to use just statistics as evidence for cheating is questionable practice.

Punishing students without any concrete proof just because they are good on a test once is neither ethical, nor is it good teaching. Even if these students did cheat, they are shown clearly that it doesn't matter how they get good grades, they will be punished for getting good grades anyway. It will be very hard to find even a single teacher who won't get more evidence than statistics before punishing a student for cheating.

That said, statistics are what cause teachers to start looking for said evidence.

Not the answer you're looking for? Browse other questions tagged exams cheating .

14
Should I report cheating to my professor? If so, how?
35
What does an optimal grading distribution look like?
6
Is looking up the source of tests and using those to practice considered cheating?
6
Any chance of math grad school?
101
Is having access to past exams cheating and, if yes, could it be proven just by a good grade?
66
Other students can easily cheat on a test and the grading system is relative - should I cheat, and what else can I do?
13
Should I even ask my physics instructor for a letter of recommendation for my common app if I committed academic dishonesty in his course?