Stack Overflow for Teams is moving to its own domain! When the migration is complete, you will access your Teams at stackoverflowteams.com, and they will no longer appear in the left sidebar on stackoverflow.com.

Check your email for updates.

How to interpret division of Korean names when citing articles? 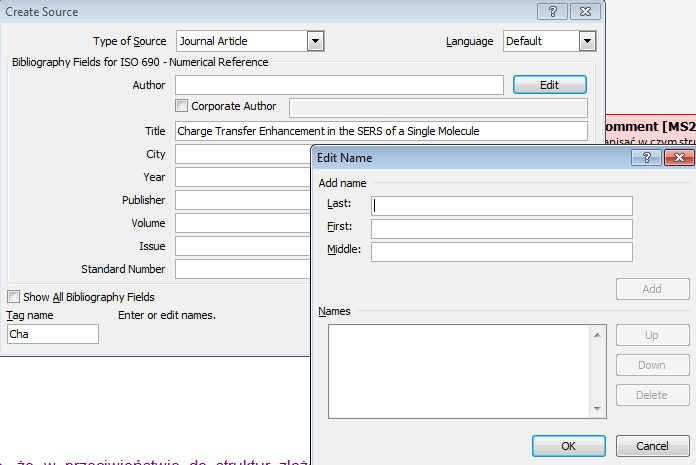 I would like to insert Korean author Won-Hwa Park. Where to put his names in the "Add name" section? What is his first, last and middle name? What are rules that govern citing Korean authors?

There are three general naming conventions you need to familiarize yourself with for proper citation in a modern context: European, Middle Eastern and East Asian.

In this case the Family name is usually 1 Chinese character, and the given name is 2 characters (even if the characters are no longer used as in Korea and Viet-nam). In Chinese, Korean, and Viet-namese that usually means one syllable per character, but in Japanese it varies wildly.

Many times the romanization of the East Asian names will join the given name with a hype (Won-Hwa) or have them as a single, unbroken word. However, sometimes they are broken apart, in two words, but they are still one name. When in doubt, Google the name you suspect to be the family name. If it is the family name, there will be lots and lots of people with that name. (Park is the most common name in Korea).

Sometimes the Fathers and Grandfathers given name is preceded by an article like 'bin' (Arabic), 'ben' (Hebrew), 'ibn' (Classical Arabic), or substituted for 'bint' or other female forms before the father's name if a woman. The locational name will almost always be preceded by the article, 'al'. The articles may be separated from the names by a hyphen or not, but when written should be included, but not usually when spoken unless in very formal circumstances.

In a citation manager it should be entered as follow: 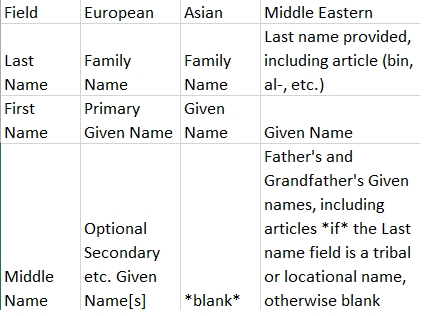 4
Can I use my first name instead of last name?

49
Should I cite author names as they appear in the journal or as I know them to be complete?
6
In citations, how to find out if it's a compound name?
10
Common practice for references to articles with different spellings of author's names
8
Pen name similar with real name: Zu Yangzu instead of Zu Yang for papers
2
Citations: What do I do when the article writer's name is the same as mine?
25
Some authors can use variants of their last names in two different publications. How does one write their last name when citing both inline?
13
Is it okay to omit (one or multiple) middle names in a bibliography?