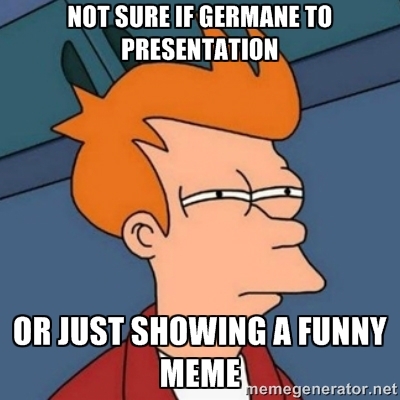 Not the answer you're looking for? Browse other questions tagged etiquette graphics presentation or ask your own question.

127
Should the slides in a presentation be self-explanatory or be as minimal as possible?
78
Can I use images showing up in Google search for my presentation slides without violating any copyright?
13
Is it a good idea to connect data points on a plot to increase readability in slides?
1
How to organize content of slides for a conference presentation?
2
Should non-talk slides be included in the handout?
28
How much information should I include in my lecture slides?
136
Why do most people think it's a bad idea to read from slides?
2
Is it necessary to have many slides when presenting in conference?
5
Is it appropiate to put a funny funny slide in a Bachelor thesis presentation?
7
Pros and cons of including mathematical equations in presentation slides