Is it considered unusual in the United States for a professor to run a class outside on the grass?

An American professor lectured in our university about American higher education. He mentioned that the university environment is not limited to formal education (what is the case in Europe more or less). A university courtyard is like a park and students are always hanging around.

He also mentioned that it is not unusual for a professor to gather students and sit on the grass outside and run a class. This is something that I have never seen in Europe (at least Hungary where I study).

Most universities I have seen (including new campuses built by EU funding) are just buildings, because people believe yards are waste of money. Things happens in buildings. In these universities, students go to the class, and after that, they quickly leave the university.

There are always exceptions to the rule, but there is still a rule. Asking a like question in the U.S. creates uncomfortable reactions, and usually denial that classifying people or countries or ... is not possible!, as you notice in reply to your question; and this is similar at Academia SE.

That all said, I've studied in Germany, France, and the U.S., and spent about half my life in both Germany and the U.S. By and large, all your original questions should be answered "Yes, yes, yes, and yes."

The main reason lies probably in rules that apply in most colleges - you are held to live in university housing, while sharing a room with a stranger for a year or two, in many cases hundreds or thousands of miles away from your hometown. Even when attending universities that, for space reasons, can't have housing on campus (e.g., Columbia in Manhattan), you will usually choose (if only for rent price reasons) a university provided off-campus dormitory type facility. This would have been terrifying for young, shy me, but has some very good consequences in that, by and large, Americans learn to deal with imperfect living accommodations, and to get along with people you have little in common with (my first room-mate was just back from a Mormon mission). Even when I lived in a dormitory at my undergrad alma mater, I had no room-mate, and close to no contact to the other dormitory residents.

There is also a tendency to use college years as the years you go craaaaaaaazy, which is accommodated by the many campus universities which often look like a large park (google Berkeley, or CalTech, say). I've seen a guy run around campus naked, covered in peanut butter head to toes, as part of his campaign to become the football mascot; that mascot (costume) was 'kidnapped' by the rival university (which led to some pompous administrative reactions); one day each year Freshmen caught in a particular spot were supposed to be kissed; and the school band occasionally mooned the opposing team, and performed other 'look how crazy we are' acts. Things have. I think, gotten more Puritan in recent years - I am fairly sure the weird annual kissing tradition stopped. But it existed as recently as about 10 years ago. As you'll know from your campus, that is a far cry from typical European experiences. My undergrad campus, as an 18th century castle built to resemble Versailles, had ample lawns, and a good amount of parties; but the events mobilizing students were the frequent political demonstrations which pulled tens of thousands of students to the castle and the surrounding streets.

Finally, giving a good, entertaining lecture is valued much higher in the States. This is a good thing: all the professors that truly impressed me I met in the U.S. As part of this, lecturing outside happens, but is not common. The world is getting smaller every year though: Europeans teach in the U.S., then go back to Europe - and vice versa; and the Information Age removed barriers that used to be high. So obviously, the stiff Dr. Unrath no longer teaches in Germany either, and I've had classes outdoors there too.

A university courtyard is like a park and students are always hanging around.

There are thousands of colleges and universities in the United States. Some have large campuses with lots of space to hang around. Some are urban campuses with little outdoor space available. Some are entirely contained in one building. Some have mainly residential students, and some have mainly (or only, or some) commuter students who live off-campus. Some serve mostly full-time students, while others cater to students who are doing other things outside of school and don't have much free time to hang around. Some are in boring locations with not much else to do, and some are in fun cities with many events and activities available outside the university. Some are in pleasant climates and some are in places that are very hot or very cold for some or part of the year.

All of the factors above and many more go into determining whether a given university, out of the thousands, is one where students tend to hang around outside.

He also mentioned that it is not unusual for a professor to gather students and sit on the grass outside and run a class.

It may happen occasionally (see example), but it is very unusual. I have never attended, taught, or seen such a class firsthand.

Here is an article with some more anecdotes.

He mentioned that the university environment is not limited to formal education (what is the case in Europe more or less).

If a professor decides to teach outside, it's still a formal class, not a social event.

At least where I teach (a small liberal arts college in the northeast United States), if you go to the courtyard on a sunny day in the spring you will probably see one or two classes meeting outdoors.

Of course, this is more common for small classes that don't need chalkboards or other materials. I've taken upper-level math courses outside a few times, but it's a lot of effort to move a portable whiteboard outside, so it's not something I'd be willing to do on a regular basis.

Overall, I'd say that I agree with the professor you mention that colleges and universities in the United States are often thought of as academic communities, and their design often purposefully incorporates communal spaces for students and faculty. However, I've certainly been to colleges in Europe that share this same design philosophy. It may be less common in Europe, but I'm not sure that this reflects a different philosophy so much as practical considerations. For example, it may be hard for a university in the middle of a big city to have enough space for courtyards and such, and universities in Europe often seem to be located in the middle of major cities.

To answer the question at face value: Yes, it is uncommon for professors to teach outside, or to take the class out of the formal area of the classroom. But it is not unheard of. I typically take my class outside so once a year or twice if the class lends itself to group discussions and the weather is nice.

American professors often feel free to modify their classroom environment in whatever way they feel will provide the best education. For most large or highly technical classes, this means they don't change anything at all, because they feel a standard lecture environment will be the most effective.

The most common intervention is simply to change the arrangement of chairs in a classroom into a circle. The professor then sits in a chair just the same as any student and facilitates a discussion rather than lecturing. Shifting to a non-classroom setting, such as outdoors, is less common but would probably not be considered particularly surprising by most American students. In my own experience, two of my undergraduate classes frequently relocated outside, and it was probably a good idea for both of them.

For one specific instance of a university for which this is common, at the one specific university I was a student at and also taught at, Auburn University (in the southeast United States) it is not "unusual" for liberal arts professors to do this. Most liberal arts classes consist of 25 students or less, and discussion may be a large part of the classroom.

Many liberal arts professors at Auburn teach a class outside on the grass once or twice a year, and a few will pick a day a week during the spring. The building in which liberal arts are taught has several courtyards as well as an expansive outer area with fields of grass surrounding it: 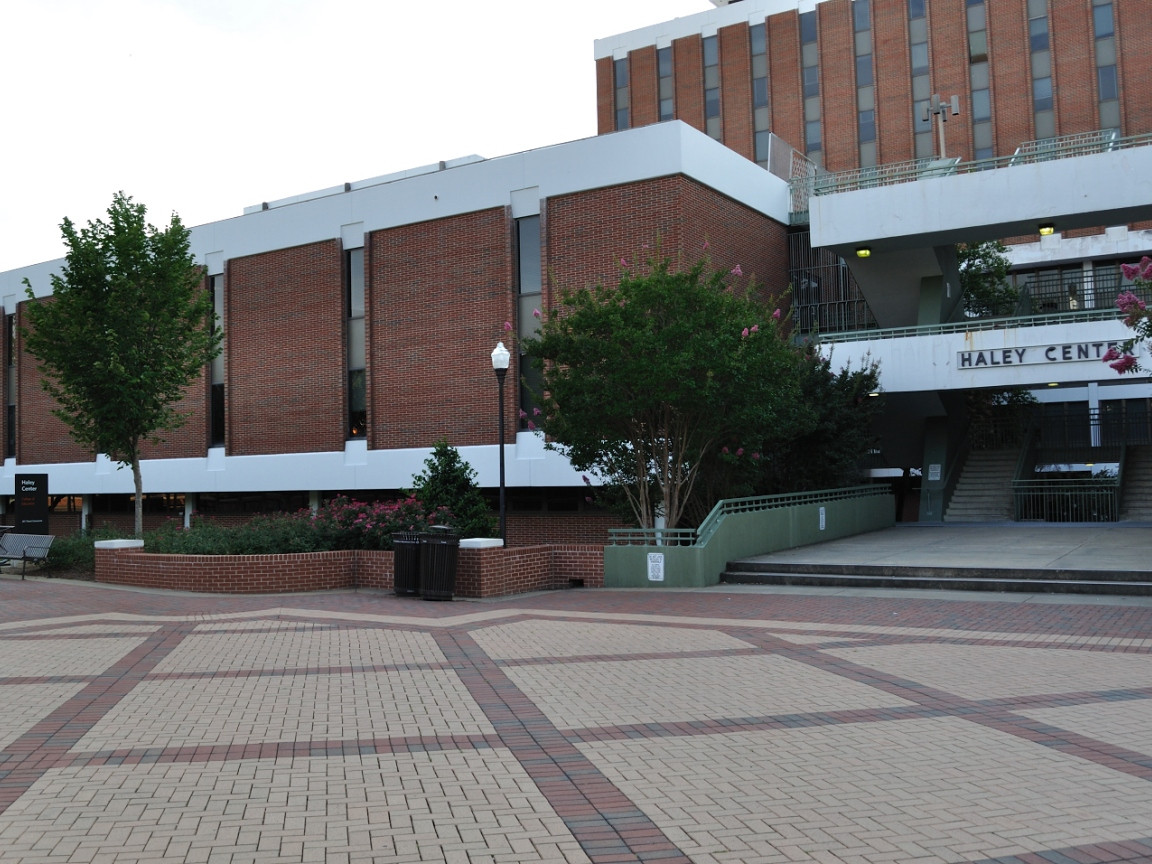 Another thing to keep in mind is that this university is located in a subtropical area and the campus is styled like a park with trees. "Tailgating" for college football (American football) is normal on the grounds on football weekends, and students are used to people picking a spot on the grass to hang out for a whole day, so a professor doing so for an hour isn't remarkable.

I have actually attended a university in Europe, and on a few occasions we had classes outside. I heard that there are some classes that do most or all their sessions outside (sometimes even at museums). I was a STEM major, so most of my classes required a large blackboard, so I didn't get to be in those classes often - I think it was a lot more common for classes like poetry, literature, language or philosophy.

I have also seen the same thing happen in the US. So the professor is certainly right in the sense that this happens, but not right to paint it as a US vs. Europe thing. Usually it's a question of how the campus is built. Old and rural universities have larger land grants and so end up with campuses resembling parks.

In cities, real estate is expensive, so newer universities or those built in the center will be just buildings, as you say there won't be much opportunity to do a class outside. Although for instance in a city like New York you could still be lucky enough to have a suitable park nearby, although whether it will be practical is another matter.

Most universities I have seen (including new campuses built by EU funding) are just buildings, because people believe yards are waste of money.

Unfortunately, a sad reality of our time. Hopefully those "people" will have had enough of concrete jungles one day.

No, it would not be "considered" unusual to run a small class outside, assuming a small enough number of students, good weather, etc.; but it's not something you'd see every day, or in every class, or even be likely to see in any class. I was never in a for-credit university class where the professor/instructor decided to do that, nor do I remember seeing a group that was obviously a formal class moved outside at any campus I ever studied at or otherwise visited.

Not the answer you're looking for? Browse other questions tagged united-states or ask your own question.