What are some bad effects of bullets in presentations?

I get confused with some comments of JeffE on this question. Those are:

The comments got a lot of upvotes, so there are many people agree with them. And I don't understand why.

I use block and itemize extensively, and I think they provide a clear structure to my presentation. The bullets are the key points that I want to present on that slide.

So why people think they are so bad?

I have to emphasize that the question above asked about teaching, while I only give presentations. Are there any differences?

Thank you for the excellent answers (I still want to hear from JeffE). I can kind of understand that using only bullets is not enough, but avoiding them entirely is a personal opinion, not a general rule.

By the way, the best presentation I've seen so far is the last lecture of Randy Pausch, in which he used a fair amount of bullets.

Bullets are useful to help speakers remember what they wanted to talk about, but they're not a powerful way to visually convey ideas and relationships between ideas.

To quote Edward Tufte in The Cognitive Style of Powerpoint:

By leaving out the narrative between the points, the bullet outline ignores and conceals the causal assumptions and analytic structure of the reasoning.

He in turn quotes the Harvard Business Review:

Bullets leave critical relationships unspecified. Lists can communicate only three logical relationships: sequence (first to last in time); priority (least to most important or vice versa); or simple membership in a set (these items relate to one another in some way, but the nature of that relationship remains unstated). And a list can show only one of those relationships at a time.

Bullets may be OK when you want to convey sequence or membership in a set. But even then, lists often have more than one dimension, in which case there are almost certainly better ways to present this than just as a plain text list with bullets. For example, take this slide showing an outline of a talk by Tom Rondeau: 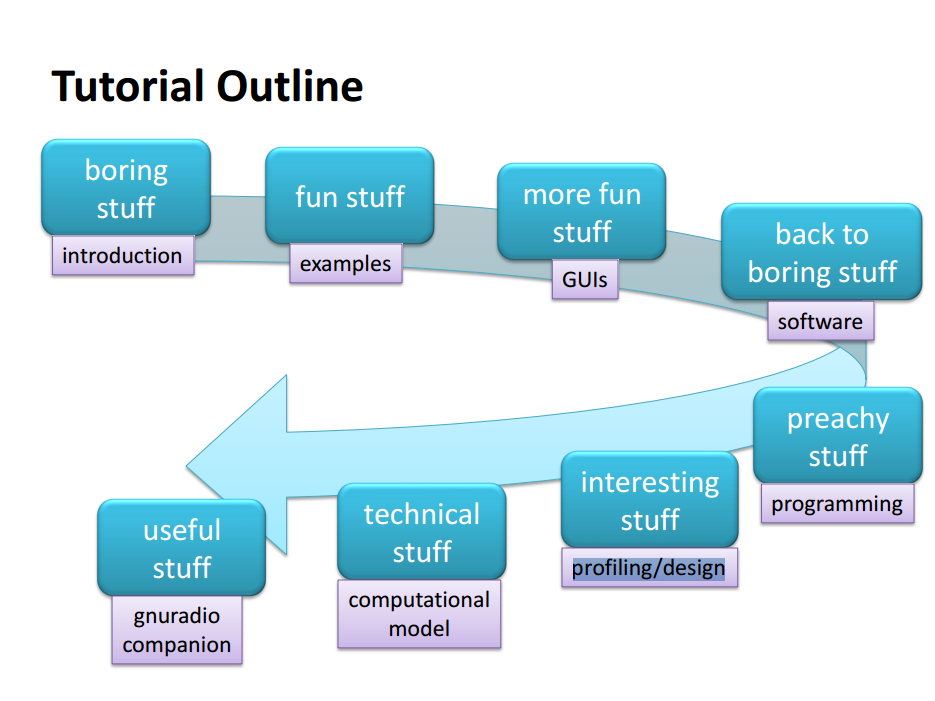 and compare it to the classic way to show an outline with a list: 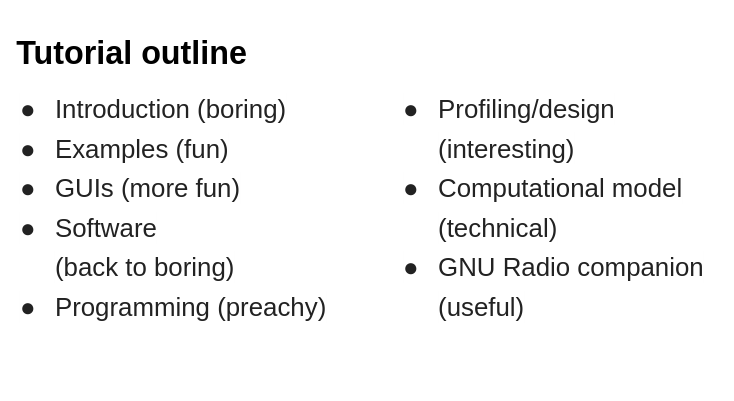 The point of this example is to show that the "plain" list, which is a fairly standard way to show an outline, conveys one dimension. The list version conveys sequence, which bullets can do fairly well (the parenthesis attempt to add another dimension, but it's subtle). The graphical version shows the sequence of the talk and also adds a color dimension to show the content of each section and its classification.

You could of course add extra dimensions to the list, too. This image was contributed by Eddie: 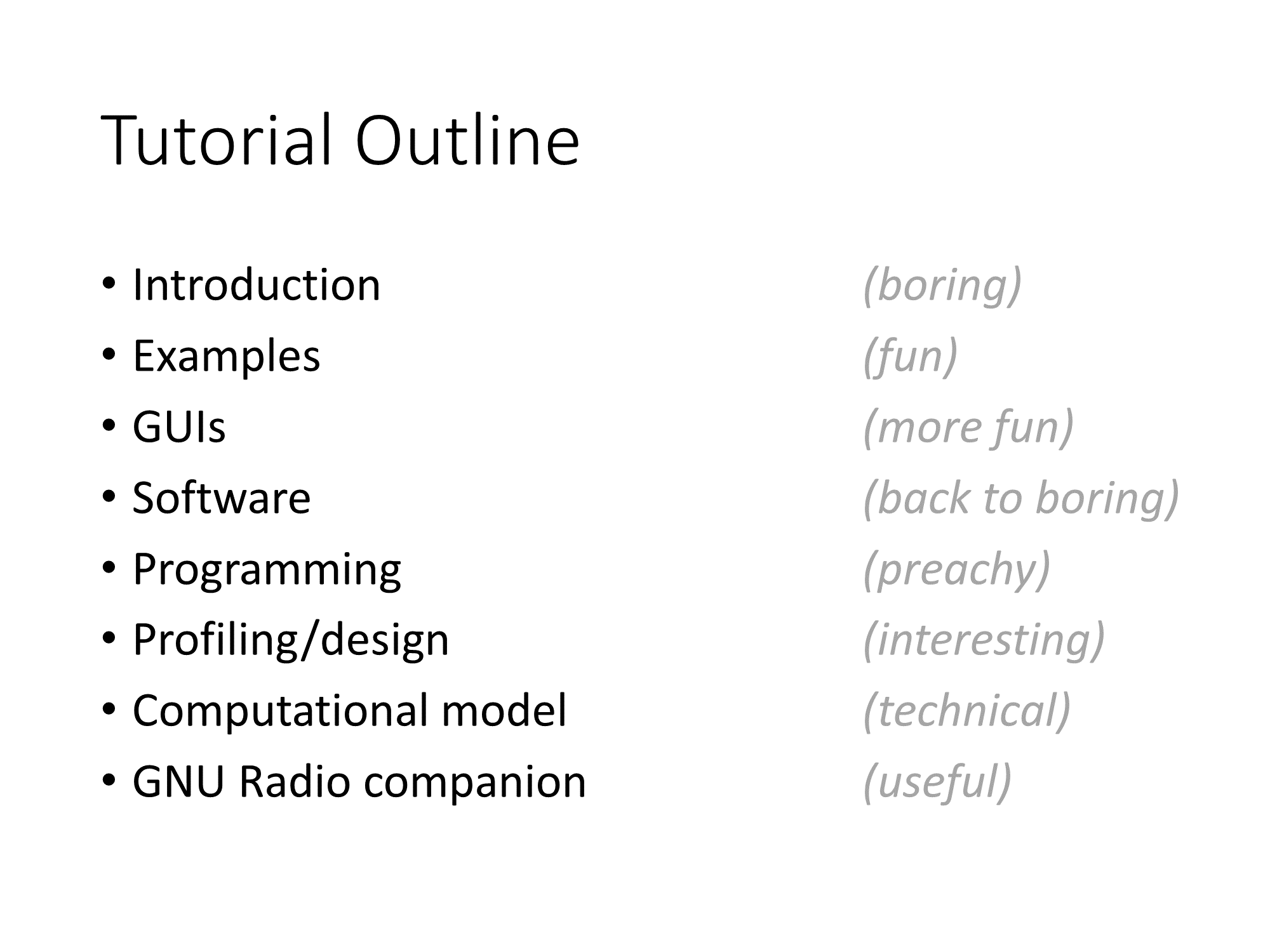 But if you are just listing points and not trying to show order, priority, or membership, all the more reason to stay away from lists.

Also see Bullets versus sentences in posters (I hate bullets in posters).

You know what I call slides with a lot of text? Your notes.

If you give people a slide with a lot of text, people will start reading the text. When they read, they can't listen. The attention should be on the words you're saying, not the ones on the slides. In most cases, a blank slide is better than one with too much text.

Of course, bullets don't necessarily mean blocks of text, and if you have three bullet points with three words each, the bullet list may not be such a bad option. But a sentence per bullet is pushing it already. If you make your presentation by opening powerpoint and typing the things you're going to say into a list of bullets, you're writing your notes, and the audience don't need to see those.

Bullets are also the first type of slide that comes to mind, and the first option powerpoint shows you. They are a crutch that stops you from coming up with a better slide. Try drawing the slide you need for your story on paper, and then figuring out how to get get it drawn on the computer.

I think it is important to balance bullet points (or other text) and visuals. While it is awful to have screens full of text, the key points should additionally be made with text on the slides.

(1) Massively helps people who can't hear you, who are working in a language that is difficult for them, or can't understand your accent. It is very important that there is text for them to read so they can follow the messages of the presentation. In academia, you should always assume there are some people in the audience who can't comprehend as quickly as you speak.

(2) Makes your slides useful later. If the key points are written on your slides, then you can hand out a copy of your slides. I don't write an additional paper when I present, the abstract and slides are sufficient. A presentation that is all images is much better to participate in, but hopeless for later remembering what the brilliant presentation was actually about.

Adding to the others, one more excellent resource: Patrick Winston's "How to Speak" lecture, which recursively self-demonstrates every heuristic point it makes.

The version I've linked to is from before the dominance of PowerPoint and is primarily a chalk-talk, but it has a section on overhead transparencies that hits the same key points. This talk provides a lot of good heuristics on communication that includes why you want to not use dense bullet points. Among other key ideas:

Not the answer you're looking for? Browse other questions tagged presentation slides or ask your own question.

126
Should the slides in a presentation be self-explanatory or be as minimal as possible?
49
In teaching, what are the advantages of using slides over doing board work?
40
Good slide design for teaching?
22
What is the significance of the overview slide in a presentation?

24
What should be put in the final slide when preparing teaching presentations?
2
Should non-talk slides be included in the handout?
6
Difference between paper and master thesis presentation
13
Self-censorship to prevent grievance being filed by classmate
48
Using rage faces in presentation
42
How to structure presentation to avoid getting questions that will be answered later in the presentation?
1
Modern replacement for slides in presentations?