Should retracted articles also be listed on the academic CV?

Should just a note (---retracted) suffice?

Is a short explanation expected (retracted for fabrication, plagiarism)?

Should one give a longer explanation (retracted due to Joe's work, my supervisor, who is a fraud. He is the rat, not me.).

Or should the retracted article be treated simply as a denied article, and not be listed at all?

In a poll on Retraction Watch asking "Should retracted papers show up on a CV?," the majority of respondents said "They should be listed as retracted": 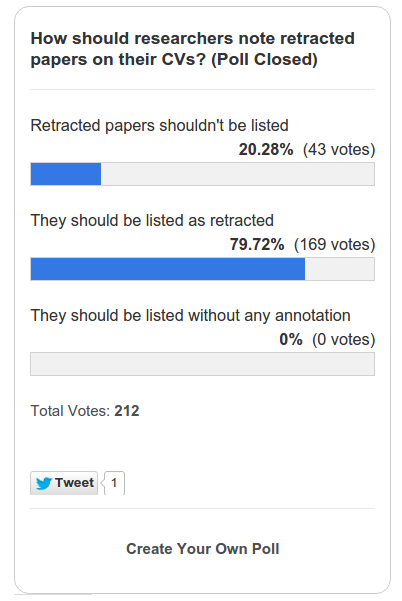 However, there is a significant minority support for the option of not listing them at all. DrugMonkey offers the following rationale for this position:

In a very large number of situations in which an academic CV is used, there is no obligation for it to constitute an exhaustive list of everything the scientist has ever done that might be considered pertinent to various sections.

If you choose to include it, a simple note that the paper is retracted, and possibly the list of authors signing on to the retraction, is probably the classiest way to do it. The retraction notice should give the rest of the details, should anyone wish to follow up. See for example Donald Green's CV (online). Assigning blame for the problem in a CV seems wildly inappropriate to me.

I do not think that a retracted article can be treated the same way as a never-published article and simply not listed, because the article still appears in the literature (and may even attract citations), just with a "retracted" mark on it. As such, anybody who looks you up may come across it and wonder whether you are attempting to conceal the retraction.

I thus think that it would be better to include the article in the CV, and think it would be best to include a short note (no more than one line) stating the general circumstances of the retraction as neutrally as possible. As for which section, I can see arguments in either of two directions:

As such, if I were dealing with this myself, I think that I would choose to place it in its own section, but put that section as late as possible, where the reader has been exposed to lots of good things before they come to the bad.

Not the answer you're looking for? Browse other questions tagged cv retraction .

36
I am interested in retracting my old journal articles. Would it have any negative effects on my academic career?
55
Does having an article retracted due to professor's ethical misconduct mean my career is over?

7
Should scholarship/fellowship monetary amount be listed in CV?
61
Researchers had a paper retracted due to plagiarism and no one at their university is aware of it
16
Can [edit: or should] a scientist's h-index decrease in the case highly cited publications are retracted?
5
Benefits of including short and/or long-term visits abroad on my CV?
0
How should multiple anticipated degrees be listed on the CV?
8
A paper was published with material from my thesis without my knowledge: Correction or Retraction?
15
Can it be disadvantageous to actively publish in completely different fields?
2
Difference between university/departmental service and extracurricular university service on CV