Why do journals have limits on the number of references?

Question: What are some reasons that have led journals to limit the number of references?

Clarification: I am not asking whether this is a good idea in general. (I think it is silly, but that's just my opinion.) I am not asking whether this can have some potentially good effect on the quality of scientific writing. I am specifically asking whether there was an official explanation ever issued on the part of the publishers explaining this rule, or whether there was some event (say, an abuse in the form of many gratuitous references or an observed trend for the average number of references to keep growing if not otherwise checked) or some strong personality (famous editor-in-chief X) that led to these kinds of policies being formulated.

For example, Applied Physics Letters has limits on number of words (with some conversion factor applied also to figures and tables), but (in my opinion, rightly) excludes the title, the author list, and the list of references from the limit.

For examples of journals (from various publishers) that have limits on number of references:

(TL;DR: Nature put in their current policy sometime between the years 1986 and 1988, with no reference limits prior. Did something happen in the 80s?)

I went down to the library and looked at the old issues of Nature (not because I want to single them out, but because the library happen to have all the issues since the 20s available on the stacks). After some binary search I've found that in December 1986 the instructions to the authors look like this (with no mention of limit to references) 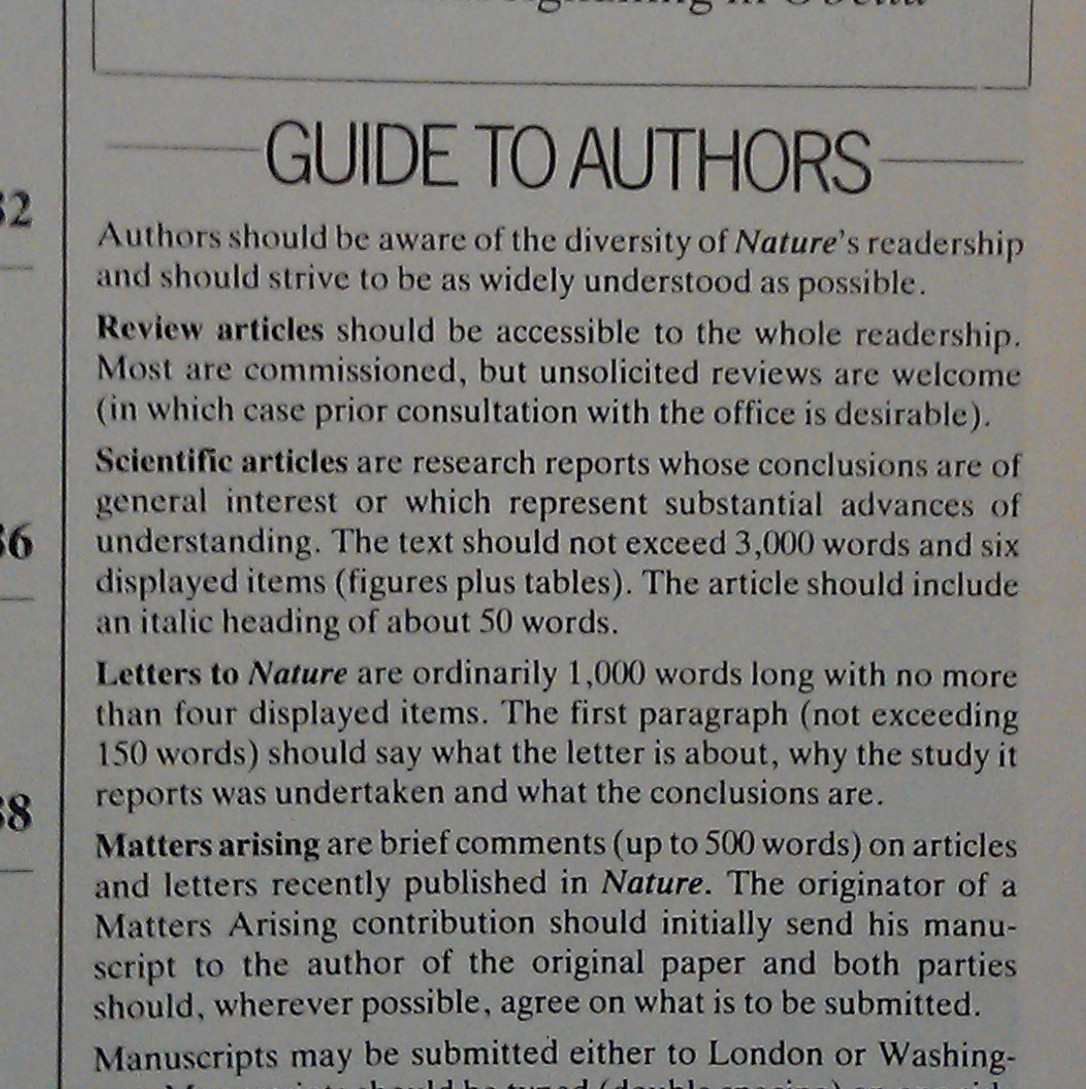 and in October 1988 it became almost the same as present day (apologies for the flash... the lighting in the stacks wasn't good). 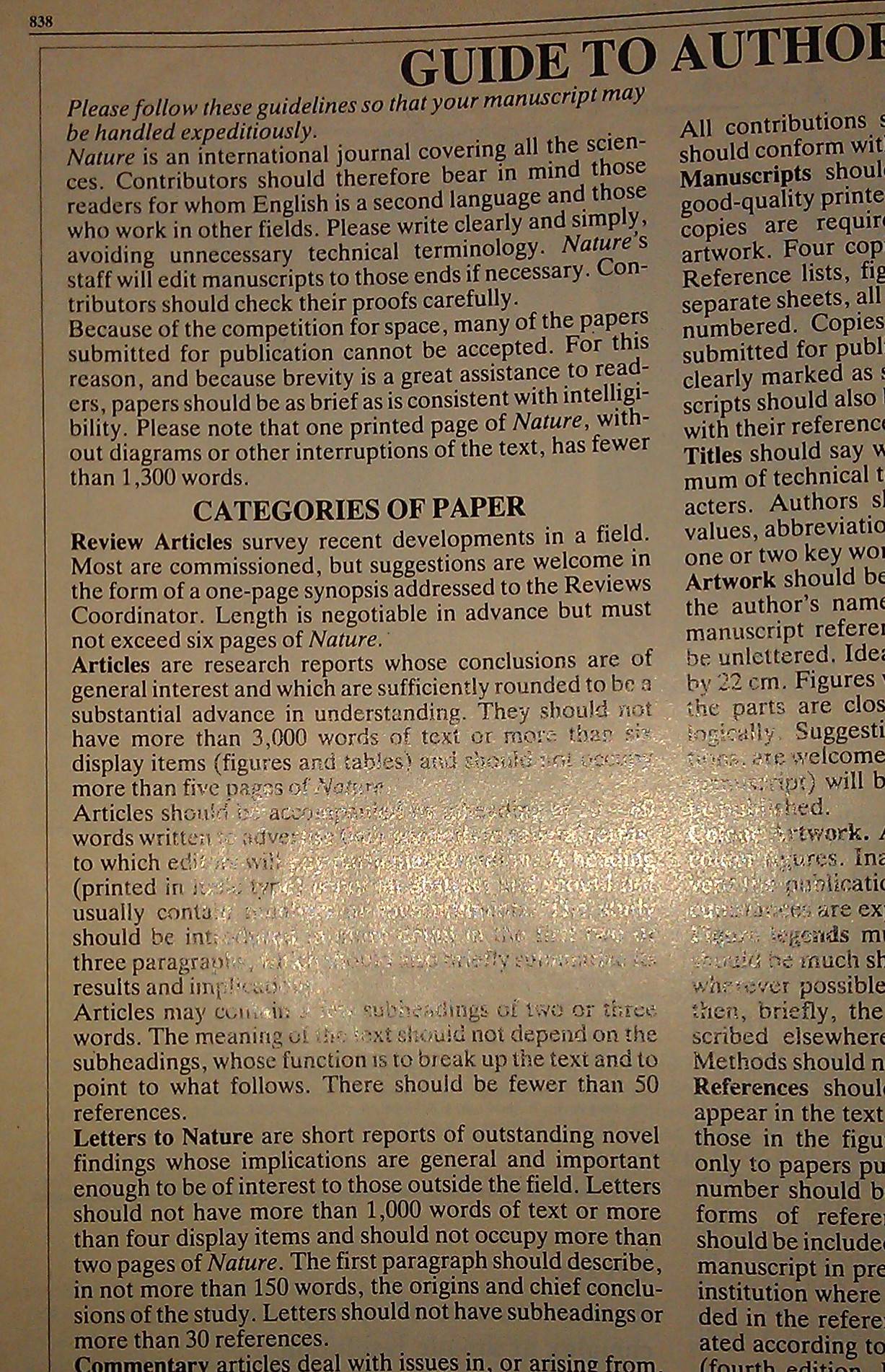 (I don't have the exact date of the switch, since only some of the issues in the library came from the original magazines; others came from bound reprints ordered from the publisher which stripped out pages like these. So in particular I found no "Guides to Authors" in the 1987 issues I had access to.)

Back in the 20s and 30s most of the items in Nature had no references whatsoever. By the 50s and 60s we start seeing articles more in the form of what we expect today, but the number of references are generally not too many. Even in the 70s and the 80s (before the change of rules) the majority of the articles do abide by the modern rules, with occasional exceptions.

Journals aim to publish an organized set of articles of some approximate length in an attractive format.

Journals set limits on the number of references to shape the form, format, and quality of the submitted articles.

This organization is a good thing, in terms of disseminating scientific information. Given the limited space of one article, there is definitely some appropriate range for the number of essential and useful references that relate to the presented work.

This is less restrictive that it might sound, as these rules set by the journal are seldom hard limits. If you have good reason to include a couple of extra references, you can usually work with the editor to get them included.

Another reason to include limits is to try to encourage authors to examine references more closely, and to be more selective in their choices of what to include. Just as many journals have rules against gratuitous figures and tables (e.g. all figs must be referenced in the text), these limits are meant to discourage gratuitous inclusion of references that are not directly related to the discussion in the manuscript.

In response to the expanded question: "What happened in the 80's?" ...

The Science Citation Index was launched in 1964. With its growth and success, and the addition of other field-specific indices, it became possible to compute statistical journal and author comparisons (e.g. Impact Factor). This concerted effort to index citations made being cited in the work of others more important, and the use of numerous citations became much more common. The benefits of these author and journal metrics were much lauded during the 70's and 80's, but people were also increasingly aware that this arrangement was vulnerable to abuse, i.e. gaming the system by inflating citations. SCI grew to become Web of Knowledge, then Web of Science and along the way (1992) it was acquired by a large media company and today it's run by Thomson-Reuters.

The question posed invites speculation; we can't know exactly what the owners and editors of the various scientific journals were thinking when they started implementing citation limits. However, I would hazard a guess that they realized gratuitous citations might be an issue, probably had a few bad apples, and decided that limits were a good idea to keep the quality of the submissions high.

From even longer past, there has not been too much tradition of careful acknowledgement of prior art, especially not of competing art, and not of historical antecedents, whether well-known or obscure. That is, "scholarship" has rarely been relevant to publishability or enhanced status. So, no need to have substantial bibliographies, since as much would be ignored as possible.

Maybe time to air out the quotation from a very well-known mathematician, to the effect (and I think it was not a joke) that if one didn't read other peoples' papers, one would not have to ever cite them...

So, in mathematics, the current style has "evolved" to only citing things "logically necessary". Rather unhelpful even to fairly-expert readers, but helping the readers is not the main goal... >:-(

Not the answer you're looking for? Browse other questions tagged publications citations journals .

2
Do references, notes, and tables count towards journal word count restrictions?
7
Letters in high-end interdisciplinary journals – how much do they weigh in a CV? Are they only for experts?
41
Literature searches in publications when you have limited access to journals
4
Does assigning DOI numbers signal anything about the authenticity of a journal? Why do some journals not assign them?
11
Why subscribe to printed versions of math journals?
1
How do journal editors check word count on pdfs?
9
How and why do references in academic papers work?
17
Is including references of journals with low or no reputation considered bad practice?