What words to describe "revisions" and "resubmission" to distinguish revise and resubmit versus submission to new journal following rejection?

This question was motivated by a desire to have a clean set of terms to describe the life cycle of a manuscript from draft to publication from the perspective of the author.

I am "revising" my paper and "resubmitting" it.

Obviously, this could apply to (a) the situation where you have submitted a paper and been given the option to submit an updated manuscript (i.e., a revise and resubmit); or (b) you received a rejection letter and you are improving the manuscript with the intention of resubmitting the manuscript to a new journal.

I was wondering what concise language can be used to distinguish these two types of revising and resubmitting?

I personally tend to distinguish these words as follows:

My concept of a lifecyle. I've used a diagram to disambiguate the terms rather than using sentences. 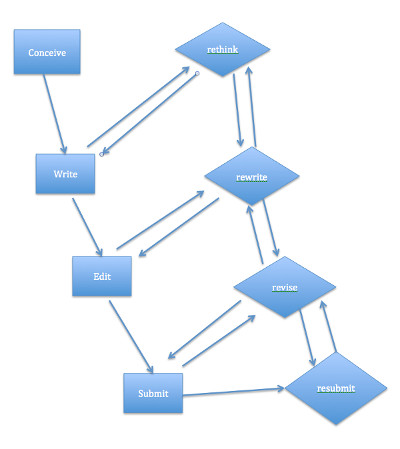 A submission to a new journal is considered a fresh start. So in that case, you would speak of 'a submission', regardless whether an earlier version of the manuscript was rejected at another journal.

A revision (of a manuscript) always refers to an earlier version, and is to be used exclusively in a context where the earlier version is known. So you can discuss a revision with your co-authors (even when that was submitted to a different venue), but towards a new journal you would not do that for an unpublished work, since they are unaware (and typically also not interested) that it might have been rejected elsewhere.

In case that you hand in a extended version of a conference article, then you might speak of a revision (but it would be better to just call it an 'extended version'), since the earlier version is publicly available.

Only when submitting a reworked version to the same journal, you would speak of a 'resubmission'.

Not the answer you're looking for? Browse other questions tagged peer-review terminology or ask your own question.

58
What does a "major revision" mean?

20
Should you mention previous rejections when resubmitting a paper? What is common practice?
18
Should I revise and resubmit?
8
Editor's mail with no reviewer's comment
57
Is it normal that a peer reviewer would ask for an executable file in order to check my results?
1
Should I write something to the reviewer who rejected my manuscript?
38
How to review a revised paper I have already rejected?
0
What is the probability of rejection for a long-time-review in the revised version of a manuscript?
0
My paper was rejected, and some colleagues say this is due to the "reviewer's mindset." What does this mean?