Ethics of not referencing StackExchange in a publication? [duplicate]

So I'm feeling a bit guilty. I've been working on a publication proof (my first) of an interesting theorem. The issue is I've been using StackExchange (Mathematics) to answer some similar questions when I get stuck on much smaller parts of the proof.

So the question here is, is it generally ethical to put just my name on a paper, even if I may not have come up with the lemma's using only my ideas, or is there a good way to I should reference StackExchange in a publication?

On one hand, most of the stuff I received answers for was for a learning purpose, similar to that of me asking a professor or teacher, not so much as a co-author. And although relevant to the publication, the answers I received could be very common in other proofs as well and were not directly related the lemmas themselves.

On the other hand, it was not necessarily my ideas that first assisted the lemma, but those of others through SE.

Take for example a question I asked earlier today. I wanted to see an alternate proof to an equation, so that I could use it as a new method of proving a lemma related, it as the original proof (Euler's Thereom) could not be generalized with such a method Proving $a^{(p-1)p^{k-1}} \equiv 1 \pmod {p^k}$ without Euler's Theorem. The proof I was looking for was simply done using the Binomial Theorem. Therefore the idea of using the Binomial Theorem in my proof will assist me in my own similar generalization. But even though I was just given the tool, the work will be done myself.

In my publishing experience, and from what I have seen elsewhere, I think the most appropriate thing to do in this scenario is to simply have an acknowledgment. This is standard for most professional publications.

For example, consider the article Counting Triangles to Sum Squares by Joe DeMaio that appeared in the College Mathematics Journal (a periodical of the MAA). Here's a snippet from the article: 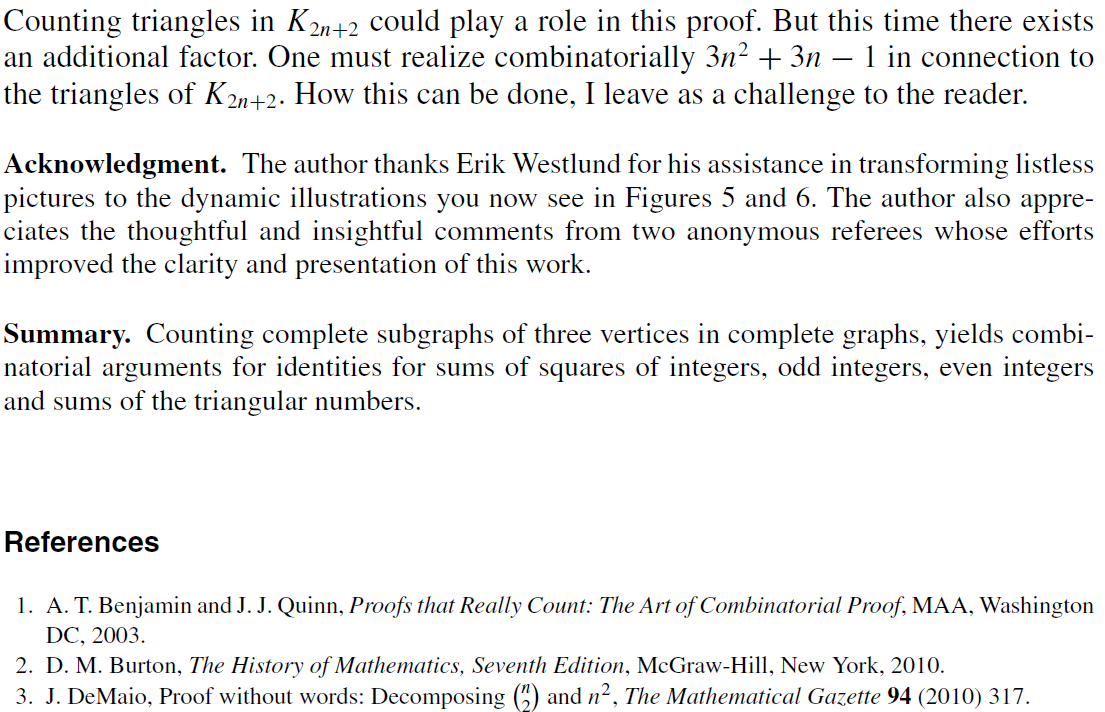 As you can see, it would probably be appropriate for you to have an acknowledgment section at the end of your article that ran something like this:

Acknowledgment: Many thanks to members of the Math Stack Exchange community, anonymous and otherwise, for helpful comments and suggestions.

Not the answer you're looking for? Browse other questions tagged publications citations mathematics or ask your own question.

51
Attributing contributions to academic work that occur in Stack Exchange

14
Why (what and when) do we cite?
7
Why should a publication present results in a way that significantly differs from the discovery of said results?
105
Submitting paper proving “X” soon after paper proving “X-epsilon”
4
When is it acceptable to issue an update to a manuscript that is still under review?
13
Someone cited citations I used without citing my work and effort in finding the references
24
Do active researchers in mathematics read a paper in detail?
18
Advice for getting a paper published as a highschooler
19
Is my mathematics “folklore” paper worth publishing?
54
Peer review: Is this “citation tower” a bad practice?