Research articles are often priced at 20-40 USD. I know that typically a researcher's institution subscribes to myriads of journals, and that some research articles are accessible online for free either legally or illegally, but I am curious to know some numbers that would help quantify how many / often individuals buy research articles, and how much money journals make from this source of income.

I am not looking for guesses or opinions, but actual numbers.

I tried digging through the 2013 annual report of Elsevier. Under "Revenue" (page 111) they list both "subscriptions" and "transactional" - but the latter include not only reprints, but also books etc. 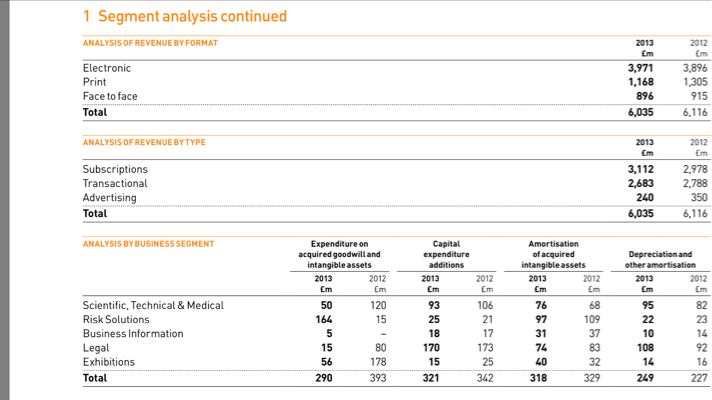 As you can see, even if we lump books and reprints together, it is still less than subscriptions.

To get a more complete answer you may have to ask them directly.

While I can't give actual firm numbers, I know that two (non-academic) consumers of academic articles are law firms and pharmaceutical/life science companies. One of my former classmates worked as a research assistant for a law firm that handles biotech and patent cases, and I recall having a conversation with him where he said they easily spend $20-30,000/year on articles, with the exact amount depending on the cases they see and how much background information they need. These costs are wrapped up in the general legal fees charged. From my own experience, I worked briefly for a life science startup, and we would purchase around $600-1,000 in articles a year (although we tried obtaining articles through academic collaborations as much as possible).

Speaking as a librarian, very rarely - only if it's urgent and can't be obtained in a useful way through ILL. The cost of journal article purchase is usually three or four times an ILL fee.

I ran some numbers on this for JSTOR in 2011, based on their public filings - it's hard to be sure, but the answers were "very little". In 2008, 0.35% of their income came from pay-per-view, and based on the quoted average, this came to something like seven or eight thousand articles/year.

It later transpired that themselves suggested around twenty thousand a year, but the numbers for this didn't quite add up, as the per-view price would be substantially lower than expected, so either a lot of material was somehow discounted or only the cheapest articles were being purchased. However we sliced the numbers, the easy answer was "not enough to really be significant". JSTOR have, to their credit, substantially widened public access since then, so these numbers will probably have dropped further.

An order of magnitude estimate for the revenue a publisher might get from these direct purchases is "several thousand dollars per month". For a publisher as large as Elsevier it might reach the low six figures per month. Given that Elsevier's revenue is in the billions, this is literally a rounding error.

Source: I used to work in academic publishing.

Not the answer you're looking for? Browse other questions tagged publications reference-request fees or ask your own question.

28
Will uploading a copy of my paper to Academia.edu harm the journal it’s published in?
26
Reference for annual journal subscription costs paid per university?
5
Earnings generated by open-access papers vs. paywalled papers
-2
How many research papers are downloaded by each major economic sectors?

28
Who is earning money when users buy access to a research article?
6
If I buy a research article, will I get any potential retraction statement or erratum free of charge?
0
What to do with what I've learned when writing my research proposal?
152
Why are most scientific articles locked behind a paywall?
11
Do people actually scoop others?
18
Is it possible to get IRB approval after the fact?