You can find the current collective agreements for all universities on the Tertiary Education Union's website. Entry-level salaries for a lecturer, and the low point of the senior lecturer range, at the start of 2021 were as follows (all NZD):

The average is about NZ$78,000. These generally have annual percentage adjustments built in, so the base rate increases each year. There is generally also an automatic progression within a grade for current staff across several steps spread between the lecturer base and senior lecturer base, and it is generally possible to be appointed mid-grade as well according to experience (e.g. working time since PhD). All of this varies from school to school, and there are also other payments that may apply, so you should check the agreements for particular details you're interested in. If you're not a union member these rates will generally apply to you when you start as well (by law, historically, but the situation may change).

A couple of the agreements linked above have expired, and may have been replaced but not yet made available on the website, and some contain increments that hadn't come into effect yet. The general area of the numbers is right, though. There is a fair amount of variation between institutions, particularly the largest and smallest universities. There's also quite a bit of variation in how the scale works above that lowest-level entry point and how many steps there are (between 6 and 9 before moving to SL). 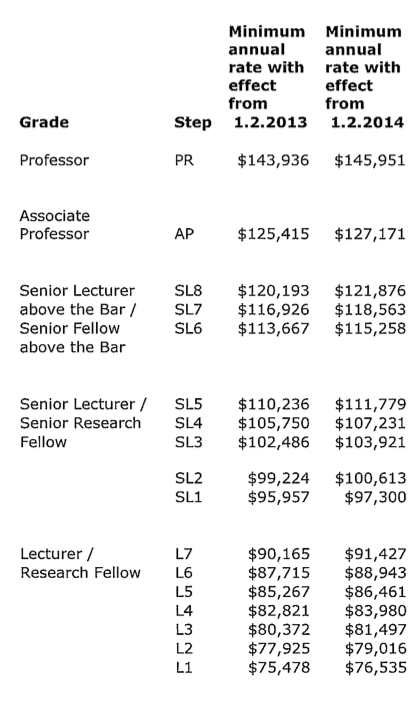 Not the answer you're looking for? Browse other questions tagged professorship salary lecturer assistant-professor new-zealand .

5
Is salary of a faculty member increased automatically year-by-year in the US and Canada?
4
Are salaries for academic jobs in New Zealand negotiable?
4
What is relationship between post-doc experience and number of publications on Salary/appointment levels in New Zealand universities?

23
What if a faculty member is not successful in obtaining the summer salary from a funding agency?
7
Teaching load in New Zealand research universities
4
What is relationship between post-doc experience and number of publications on Salary/appointment levels in New Zealand universities?
5
Is salary of a faculty member increased automatically year-by-year in the US and Canada?
8
How independent is an assistant professor in Denmark?
16
Can I call myself an assistant professor without a PhD?
1
How much study gap is acceptable in New Zealand?