For a future in physics, should I pursue a dual major as opposed to just taking extra physics courses in mathematics degree? [closed]

I'm an undergrad studying mathematics right now. I have a very big interest in mathematical applications of physics, and I have been debating whether or not I should change my degree to a dual major (math/physics), because of this annoying little fear that only the math degree won't prepare me for a career in physics research later down the road, at the graduate level. However, the Mathematics is the degree I want (I believe there are more opportunities - I'd also enjoy going into a [bandwagon?] research field like Artificial Intelligence)..

Would a BS (and of course grad school) in Mathematics alone be enough to prepare me for a decent graduate school future, if I decided to pursue research in theoretical/mathematical physics? Or would it be better for me to tack on the dual major in physics? I would rather not stay in school an extra year and a half (it's already taking long enough after the A.S. in computer science!), but if it's necessary, I could do that.

I found another thread on ASE about this, with someone recommending that of course a mathematics major take physics courses - and I have.

My specific question is if it would behoove me to pursue a dual major as opposed to just taking extra physics courses (or a minor).

This is essentially the bare minimum I have to do for just the mathematics major.

These would be the physics courses I could tack on. The darker colors are required for the dual major, the lighter ones are electives.

The grad program I'm looking at, by the way, has a Master's program in Math that offers courses like Riemannian Geometry, Riemann surfaces, Group Theory, etc, which I think are useful in theoretical/mathematical physics at the graduate research level. Here's a picture 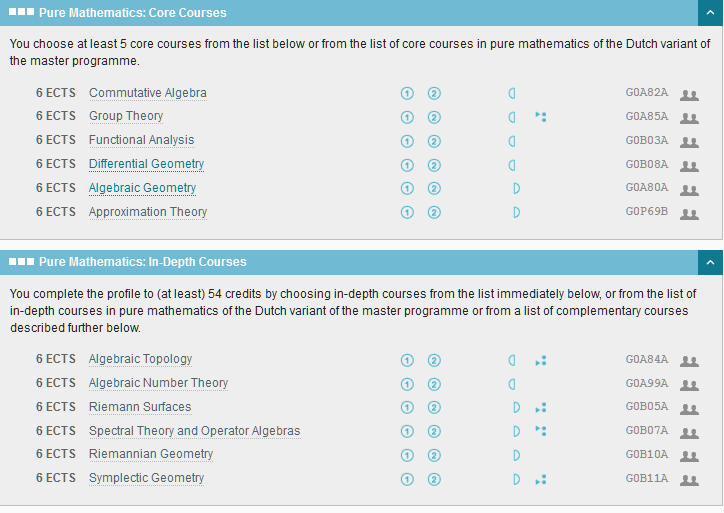 (Speaking from the perspective of a US grad student who did double major, but who has no direct experience working on a grad admissions committee.)

In general, the extra degree itself probably isn't much added value for what you want to do. You have your statement of purpose and the rest of your application to show what specific knowledge, skills, and interest you have. Grad schools will look at your transcript, seeing every course you took anyway. If you take enough physics courses, it shouldn't really matter what your diploma says. And by the time you finish grad school, your undergrad major will be even less important to people.

The question is how much is enough physics? I don't have any course descriptions to work with, but "Principles of Physics" sounds like a survey course for non-physicists, the kind of thing you won't learn anything useful from. If you want to do research in physics, you'll need a graduate-level understanding of physics, and for that you'll need plenty of undergraduate-level physics. You should have at least a core foundation of

by the time you finish undergrad. Now since you are planning to do primarily math for the PhD there might be some flexibility in that you can hold off on some of this until grad school, but note you will still need even more physics knowledge to do research. If you don't know any physics discovered in the last 100 years, there's no way you can discover anything new, and all the subjects I listed are at least 100 years old.

To be sure, some math is very useful for physics. But just knowing differential geometry doesn't mean you know general relativity, and particle physics is more than just the pure group theory you'll see in a math course.

On the topic of labs: I've met a fair number of student mathematicians-interested-in-physics who say labs aren't important for what they want to do. That might be true for what I would call a mathematical physicist, but I don't believe it for theoretical physics. Some exposure to a laboratory setting is important for knowing what physics really is. This is based on my own experiences, as well as advice I got from my (Nobel-prize-winning, theoretical physicist) undergrad adviser. The thing is, undergrad physics courses are unfortunately largely doable with blind symbol manipulation. Those who are good at it (and mathematicians usually are) often end up thinking physics is just easier, less abstract math. But physics is an empirical science, which math most certainly isn't. A (well-organized) lab will show you how much more there is to thinking like a physicist than solving the Schrödinger equation with yet another potential. And if it turns out thinking like a physicist isn't your cup of tea, it's better to find that out earlier.

In summary: Decide what classes you want to take, keeping in mind that you'll need a number of actual physics courses, taught by physicists, if you want to do physics proper (rather than, say, prove pure math theorems deemed important by those with more of a connection to physics). If that list of classes is a superset of the physics requirements, sure, do the extra major -- if nothing else it might impress an industry recruiter should your career go in that direction. If it isn't a superset, just take the physics courses of interest and skip the extra major.

My answer is specific to the course lists you have linked to, and written from a US point of view.

Electronics lab is for experimentalists. Since you say you want to do mathematical physics, I don't see any point in that (unless it causes you to change your goals). Take those electives that interest you.

Also, check the admissions requirements of graduate programs you are interested in.

Not the answer you're looking for? Browse other questions tagged mathematics changing-fields physics major or ask your own question.

9
Is there any chance for a person with BSc in mathematics to get into good graduate level theoretical physics program?
9
Taking higher level theoretical mathematics vs taking less math and more courses in application areas?
6
Is it necessary to double major with math to be considered for theor. physics grad school?
11
What type of Grad School if I'm interested in Quantum Computing?
2
PhD in Mathematical Physics