One of the main criticism against arXiv is that while there is some basic filtering, but there is no scientific review of the papers. I wonder whether adding a comment section has already being discussed publicly and why as of now arXiv does not have a comment section.

http://www.nature.com/news/arxiv-preprint-server-plans-multimillion-dollar-overhaul-1.20181 (published on 29 June 2016) has some interesting statistics on whether users want a comment section: 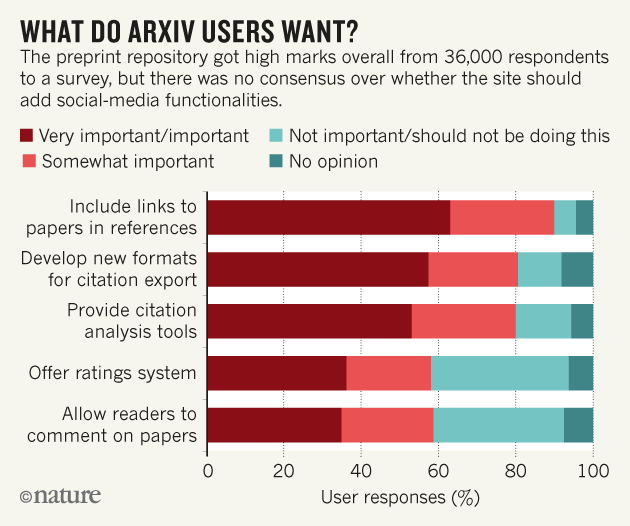 When asked whether arXiv should embark on more transformational changes, respondents gave mixed answers. In particular, some questions focused on whether it should develop into a social forum that allows scientists to comment on papers or leave ratings. A few social-media sites have already been built around the repository for just such purposes — such as SciRate and Arxiv Sanity Preserver — and some argue that the site itself should begin to incorporate such functionalities. “ArXiv should be more dynamic — allowing readers to filter the wheat from the chaff,” says Alán Aspuru-Guzik, a quantum chemist at Harvard University in Cambridge, Massachusetts. But one-third of respondents said that this wasn’t important or that arXiv shouldn’t be doing it. Only 34% voted in favour of such changes.

That response points to a tension between researchers who want to see the site incorporate aspects of open review, and those who want it to stick to its core mission of allowing rapid exchange of scholarly papers, says Rieger. There were hints of a generational divide, with those aged under 30 more in favour of allowing comments. But even those who wanted a more social site said that they were keen to avoid a commenting free-for-all, Rieger adds.

“The message was more or less ‘stay focused on the basic dissemination task, and don’t get distracted by getting overextended or going commercial’,” says Paul Ginsparg, a physicist at Cornell University who launched arXiv in 1991 as a pre-World-Wide-Web-era bulletin board.

The idea of adding comments in some form (not 'on the arXiv' directly) has had some public discussion. See Tim Gower's blog post Why I've also joined the good guys. Sadly I've seen very little of the idea since, so I don't know what the current state-of-play is.

There is no need for a comment section. The authors have provided their contact information, so you can email them directly with any feedback you have for them.

PLOS has comments, though: http://www.plosone.org/static/commentGuidelines.

When they're used, they don't generate much discussion, so maybe arXiv has guessed right about the user demand for them. http://www.plosone.org/article/comments/info%3Adoi%2F10.1371%2Fjournal.pone.0105948

Not the answer you're looking for? Browse other questions tagged arxiv or ask your own question.

40
Is the arXiv a good way to get feedback on one's work?
34
I found a published paper that looks dodgy. What to do?
14
How to deal with errors in well established papers
1
Why there isn't provision for writing comment on published articles like social media?
2
Reference on the authors' willingness to receive public, online feedback on their work

29
Made an arXiv submission too early; How to minimize the damage?
27
Immature papers on arXiv
13
Why does arXiv not allow numbered lines in submissions?
46
Is it ok to put old papers on the arXiv?
10
Is it fine to post my paper's preprint both on my blog and on arXiv?
10
Why would a conference discourage authors to submit their papers to pre-submissions platforms (e.g., arXiv) before submitting them to the conference?
2
Should I withdraw a paper from arXiv if it does not contain any new research?