When to use a table vs. a plot to present numeric information?

I find that in many cases, either a table or a plot will do an equally good job of presenting numeric information. Does anyone have any advice or even rules about when to prefer using a table over a plot and vice versa? I'm referring to tables and plots in the context of academic journal articles.

I would say: Use tables if the actual values are of importance and use plots if trends (or similar things) are important.

The rationale is simply that one cannot extract actual values of a function at specific places from plot. Vice verse its much simpler to see linear growth or periodicity from a plot than from a table.

As @Dirk says, it's often quite useful to preserve the numeric values - that's the motivation for tabulating data. However, plots have the advantage of being able to easily visualize trends in data.

If you have a set grid of x and y co-ordinates, with each pair of co-ordinates having a numeric value, you can sort of do both.

Here is an example. The trends in the data are made much clearer by plotting and colour-coding the data, but the numeric information is preserved. As a result the readability of the numbers isn't perfect, but (depending on your data) you can sometimes have the best of both worlds. 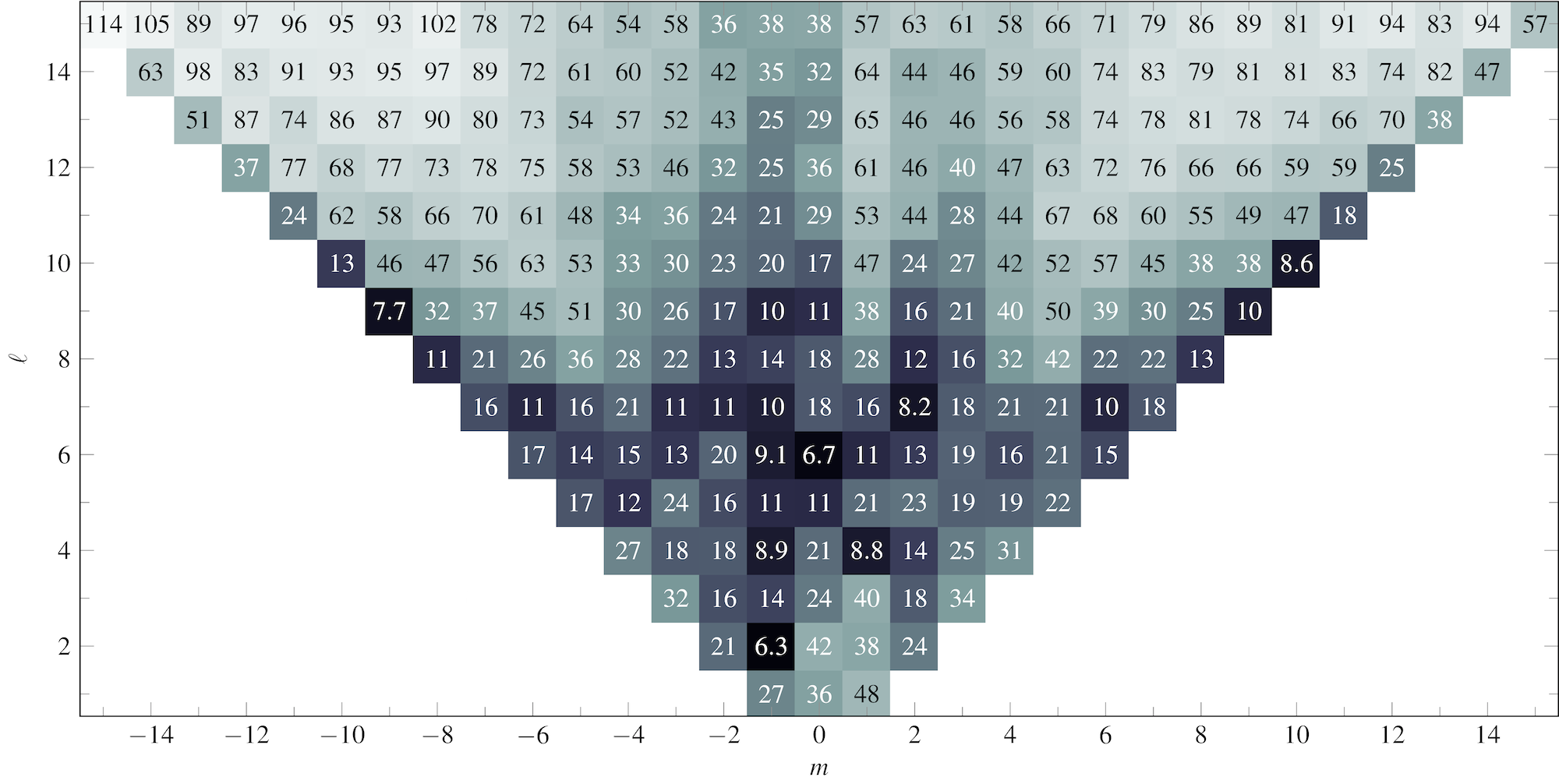 In addition to the other answers, I think it depends on how much data you are trying to show. Personally, I like to use tables when I can. If you have only three data points, a figure wastes a lot of space and ink. Tufte calls this the Data-ink ratio. In his book, he recommends:

Above all else, show the data.

So, if you have hundreds of data points, you would show a figure, unless the exact data values matter (in which case it is rather a reference table). But if you have only a handful of points, it is more efficient to display the data in a table. Unless, as other answers point out, you want to visualise a particular relation or trend — then a visualisation is again more appropriate.

Are the specific values really, really meaningful and relevant? Do they have meaning outside of the sandbox? Are you, for example, publishing new measurements of fundamental constants? No? Then, most likely, the actual numbers have no business being in your extended abstract.

My rationale is: you are telling a story. Elements that don't serve to make a (major) plot point or at least support it have to go. Nobody will look at the numbers if their values are not relevant or support a point you are trying to make.

Now, there is data that does not lend itself well to the usual plots you can make (line plots, histogramms, bar charts, ...). Sometimes, a table is all you can do, especially if the data has no useful scale in at least one dimension. For example, assume we have investigated four methods in four scenarios and have collected some quality measure; the bigger the number, the better the method worked in that scenario.

What do we see in this table? Nothing, without really reading which may be a waste of time, given that the numbers may not mean anything on their own.

What is the story we want to tell? Maybe something like this: Methods one and three are complementary and excell in their respective strong scenarios; you should pick one of them if you know which category your application falls into. Method two is somewhat useable in all cases but worse than the specialists; use it if you don't know what you have at hand. Never use the fourth method, it's always bad.

We can improve the table so that it supports that story at one glance by normalising the data (I assume a linear scale from 0 to 250 here) and giving visual indication of "good", "meh" and "bad". 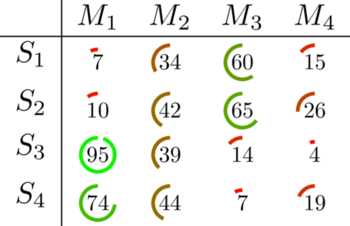 Now, the layout of the table can be improved and maybe you want to swap columns so that the complementary methods are neighbours. It is hard to show variances with this visualisation. Furthermore, the choice of colors can be debated (red/green may have different meanings in different cultures; also they can not be distinguished by a sizable portion of all readers).

Still, I think the example serves to support my point: be creative when representing data, with a focus on supporting the narrative of the article and less on dumping data (there's other places for that).

There is plenty of literature on visualising data but I'm not intimately familiar with any, so I'll just point you towards some blogs:

They have plenty of inspiring examples.

One further TeXnical note: it's possible to draw small inline-style plots (called sparklines, apparently) with which you could potentially fill a table.

If you are able to do it, use plots, period. What little purpose tables used to have is currently best served by online supplementary material, either on the journal's website or your own.

If you have more than a couple of constants/data points (which would not require a table either), numbers are very difficult to read and (good) plots are much better for human consumption (I don't think this is merely a matter of taste; while I am not an expert there is quite a lot of research on this).

If actual values are actually useful to someone, a table is in fact a very poor way to provide them as anybody wishing to use them must go through a time-consuming and error-prone data entry process. What should actually be done in this case is making the data themselves available electronically. A table is not a decent alternative to that, not anymore.

I find that in many cases, either a table or a plot will do an equally good job of presenting numeric information.

Strictly speaking, a plot does NOT present numerical information because it is just a picture. The purpose of a plot is to show geometrical form of some dependence(s) when this form is important. It is impossible to recover original numerical information from such picture. The requirement of reproducibility of scientific results requires to provide all necessary information needed to reproduce the results described in the paper. Most journals do not allow publishing large tables of numerical data but they allow to publish supplementary information online which can contain huge tables in TXT format. It is good idea to supply such information and it is free.

The topic of effective visual presentation of information is subject of infographics:

Readers and listeners tend to read without no more that 16 or about items on the figure during presentation, so a good table should not be larger that 4x4 or about. This is relatively small size. Use plots if you need to present more data.

Not the answer you're looking for? Browse other questions tagged graphics formatting publications tables .

13
A new model for publications where papers evolve over time?
36
Why do journals have limits on the number of references?
2
Repeat same table or figure in different chapters or use cross references?
1
Citing statistical information presented in a table using data from a variety of sources?
3
Which software converts academic publications from PDF to Word without mangling complex formatting?
13
When the title of an article is printed differently in the front/back matter versus the first page, which should be used for citing the article?
0
How can I present the significance of two statistical tests in one table?