I was watching this video on YouTube (this is the second part of it) and it motivated me to ask this question.

The examples he talks about is discussed in this blog post. 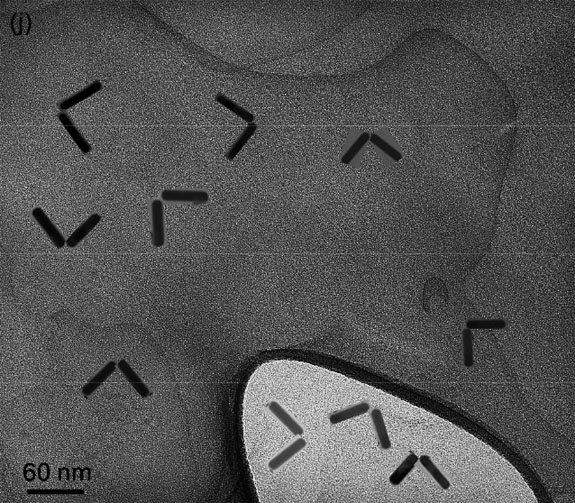 When you zoom in, you can clearly see that it is photo-shopped.

...this is one of the top ranking journals in the fields...

Now here is the really troublesome aspect... if they had done it better (you can see a much better photo-shopped image in the blog), how would we know. Not only is money spent in that lab, other groups would chase this up and that's the worrying aspect and it builds and builds. Science is like that.

In the past if the referees didn't pick it up, that was the end of the story. We now have something called the post publication peer review. There are sites ( PubPeer) and there are blogs (ChemBark, Chemistry Blog) where people upload paper and say well this looks like a great paper or in many cases they go "there is something I don't quite get here" and that leads to lots of comments from people in the field and I think this is where we are evolving to... away from the traditional peer review system. The publication is seen to be the start of the scientific process and not the end, where you generate debate.

Are there other such examples in physics? Can you point me towards a blog/site or something of the sort that goes through these things?

Are there any blogs, articles or essays that discuss problems surrounding the peer-review process (in relation to physics). How it can improved, where alternative methods like post-publication review are discussed ? I know ChemBark for chemistry, I am looking for it's "equivalent" in physics.

The methods of scientific misconduct in physics are not different from what you see on chembark (photoshopping, data creation and so on). This years nobel prize in chemisty went to a physicist as it happened often. The methodogical overlap is huge, mostly the topical focus is different, collaboration is frequent as interdiffusion of scholars between both branches. Also physics is such a broad field that the role of peer-review in different subfields has different importance.

Jan Hendrik Schön was an exceptional case, from which one can deduce the differences in revealing scientific misconduct and the role of peer review in physics vs. other scientific branches. There are not much cases like Jan Hendrik Schön in physics, as we have a very strong post-publication review system in physics/chemistry many scientific branches lack: the industry and the mathematical and experimental interdependence and overlap of most theories in neighboring subfields. It's stronger than the peer-rewiew system at the journal level and one of the reasons why physics is called a "hard science". This is really the crucial difference to other scientific branches and the reason why you will not find much important scientific misconduct by physicists in top journals. Hiring of top researchers by industry and patents are a strong incentive to avoid scientific misconduct. And top research in physics is correct, reproducable and valuable research, in branches like psychology or philosophy you really have problems to identify and judge good research by clear criterions. This is due to the nature of the topics. Jan Hendrik Schöns research career was finished, he will never do fundamental research again or wright a paper. He probably knew that is was just a matter of time considering the importance of his results that someone in academia or industry would reveal his misconduct, probably career obsessed and blind.

The case of Schön started in the physics community an open-ended discussion wether peer-review at the level of the journal is the place to detect such cases, there were not much widespread cases like this before (I can't remember). From the discussions I had it seems most physicists agreed that not peer review at the journal level was the problem in this case, but lack of review of his collaborators before submission. Unfortunately in the aftermath he was the only one sentenced and losing his PhD 2013. Take a look how much co-authors he had on most papers. Schön's other collaborators were cleared of all wrongdoing by an committee appointed by Bell Labs. They are nowadays professors at ETH Zürich and Stanford. They could not identify the fraudulent data or would have to invest to much effort?

To this it boils down, how much effort do you have to invest in peer review and what is the status quo of trust and mistrust in your subfield? Is mistrust prevailing? For some branches the status quo is problematic. In physics we can tolerate such a case of imperfect peer review at the journal level from time to time due to much stronger other inherent mechanisms other scientific branches lack. The subfield of priming in psychology for instance had to undergo rather exceptional processes to regain credibility and will have to do so on.

Of course, also other branches develop technological relevant ideas, prototypes, patents and are funded by industry, but the crucial point is that often published results in physics journals turn into an product within a decade. This time scale is important, as it has strong implications on the quality of work of experimental physicists as the case of Jan Hendrik Schön has shown. In other scientific branches, e.g. psychology, you nearly never have to fear this kind of very strong post-publication review (where experimentalists in industry and academia will try to analyze and rebuild your experiment bit by bit, much stronger than any review by an editor or collaborators) or discovery-idea-patent-product will last several decades (e.g. drug development in medicine), so nearly as long as the career of most scholars and some decide to take this risk. In physics/chemistry, for widely studied and interesting research topics, your chance is zero, misconduct in the long term (which means 10, max. 20 years) is scientific kamikaze.

Please don't interpret my words as an underestimation of peer-review done at the journal level (in non-industry relevant fields it is the most important level), I'm a strong advocate of open access and open data and in my opinion the best hindrance of scientific misconduct would be if search engines like google scholar would directly link comments on arxiv to specific papers in the search results. If a bunch of co-authors decide to falsify data professionally (not like a school kid in the picture above), then only other research groups trying to reproduce this results can reveal the misconduct, post-publication review. In physics this will happen for sure. On retractionwatch you can read stories about journals that are not inclined to publish comments of other authors proving the bad quality of their peer-review. In physics comments have always been a vital part for public discussion of competing theoretical models and experimental data. But nowadays the publishers rely more on a more profit oriented model than decades ago. So central uncensored websites like pubpeer are really necessary from my point of view seeing a rise of plagiarism and misconduct, although their importance may vary strongly from branch to branch. Physics, in my opinion, is not in trouble, actually the time scale described above has become even shorter since the rise of the internet due to better and faster access to software, data and knowledge. Unfortunately in humanities the phenomenon of "copy, shake, paste" vice versa seems to have risen.

I would like to slightly disagree with the Hauser's answer regarding the possible methods of scientific misconduct in physics.

Unfortunately, in more theoretical parts of physics some people can manage to pretend that some complete and utter nonsense represents a new result well enough to fool the referees and editors and thus beat the peer review system.

A prominent example of this (to our luck, very rare, at least AFAIK) phenomenon is the Bogdanov affair, see also e.g. the web page by John Baez on this and the Nature article on the ensuing scandal; a sample of the works involved is available through this Google Scholar query. The Bogdanov (a.k.a. Bogdanoff) brothers got their Ph.D.s using the papers in question, one in physics and one in mathematics, and in early 2000s have published a number of strange -- to put it very mildly -- papers in a number of reputed physics journals, including Classical and Quantum Gravity and Annals of Physics (and e.g. the Annals of Physics paper is still there -- it is not withdrawn until today). The papers were not just wrong -- they turned out to be downright gibberish.

In the light of the Bogdanov affair it is not a big surprise that sometimes peer review also fails to detect even a really large-scale plagiarism, as in the infamous case of more than 60 works by a group of Turkish physicists who plagiarized earlier work, see e.g. the Nature article and this post at Peter Woit's blog for details.

Unlike the Jan Hendrik Schön case, AFAIK the papers by Bogdanov brothers did not involve experimental data or predict outcomes of reasonably doable experiments, so their case is pretty much a pure peer review failure at the level of the referees and editors (and of course a failure of their thesis advisors too).

IMHO, the Bogdanov affair shows that the argument regarding going to production and post-publication review from the Hauser's answer does not seem to work well in the more theoretical parts of physics, especially when the authors make no readily verifiable experimental predictions.

Not the answer you're looking for? Browse other questions tagged peer-review physics reference-request .

34
How many people read an individual journal article?

11
Thesis peer review "service"
21
In single-blind peer-review, can you reveal your identity without the editor's consent?
17
What is the difference between Elsevier's 'waterfall system' and 'cascading peer review'?
23
Why and how commonly are scientists concerned about open peer review?
3
What is the purpose of peer-review in journals?
55
How do people peer-review many papers?
0
Can an article published in a non-peer reviewed venue later undergo peer review?
5
Peer review prior to beginning a study?
23
Why is peer review anonymous?
19
(Why) Is post publication peer review (not) taking off?