I remember of some article that was published in which the author showed a world map with circles that represented the number of articles published by country and their frequency in which a groundbreaking academic work was released in each country(One of them was represented by the size of the circle, the other by the color of the circle). But I can't find it now, could someone help me find it? I've googled some things but was unable to find it - my native languange is not english, so I ran out of permutations of words to find the article.

citations reference-request
Share
Improve this question
asked May 6 '14 at 20:55

Perhaps you're thinking of the map below? It's Figure 1 of the paper Global Multi-Level Analysis of the `Scientific Food Web'. 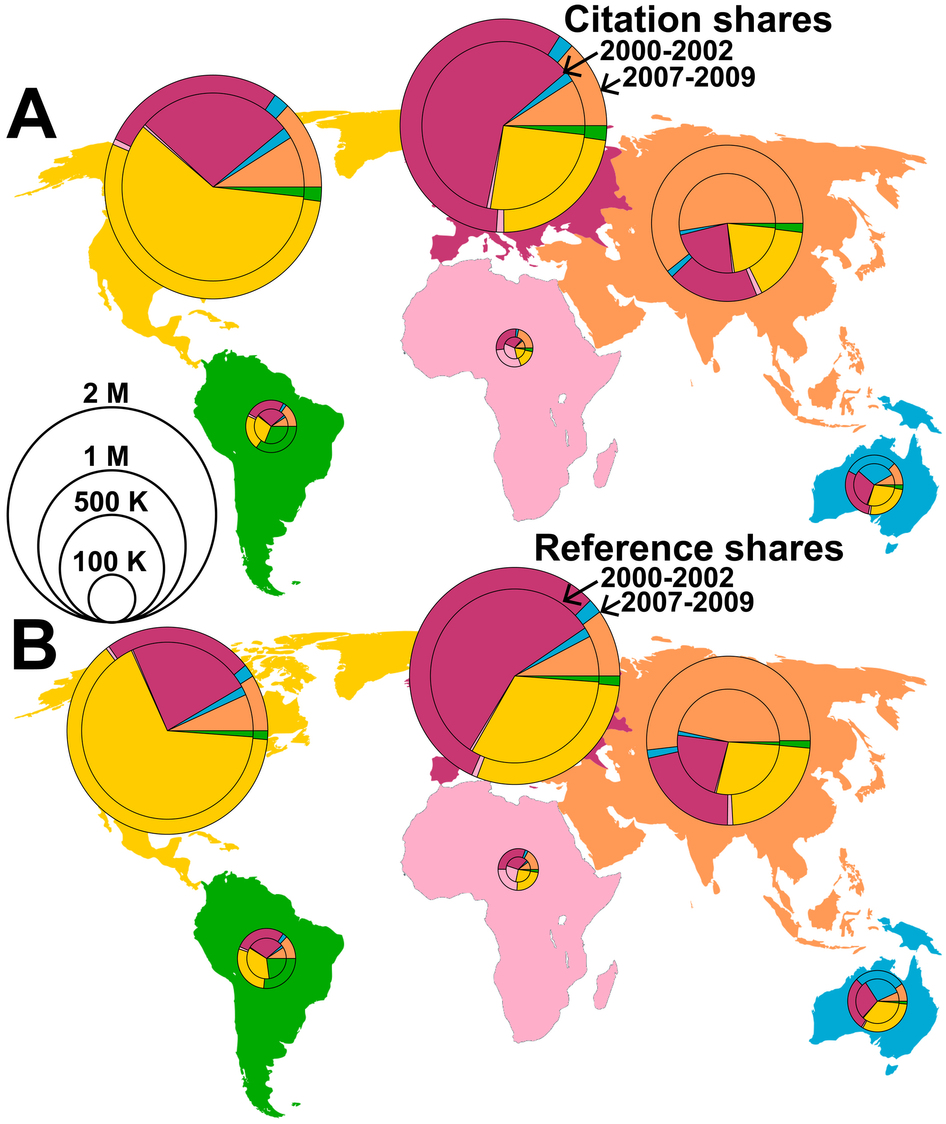 The caption is "Figure 1: World map of knowledge production and consumption in 6 major geographic areas of the world (North America, South America, Europe, Asia, Australia and Africa)." An additional note: "Circle size reflects the number of papers $P_i$ produced by the corresponding entities $i$. The inner circle is for 2000–2002, the outer one for 2007–2009. The size of the pies represents (A) the relative proportion of citations $C_i$ that the entities earned in the 6 geographic areas, (B) similar for references $R_i$ recorded in the Thomson Reuters Web of Science database. The number of papers and citations have increased over time in all geographic areas, but their shares of references and citations have changed. For example, Asia reaches higher shares recently, characterizing it as an emergent scientific power, which has become almost comparable to North America or Europe. Note that, in the three leading knowledge producing areas, the majority of references cites papers published in the same geographic area, i.e., proximity matters."

I can picture the image you are talking about, but I'm having trouble finding it as well. There is however an interactive world map here, which is broken down by institution, rather than country: http://academic.research.microsoft.com/AcademicMap?TopDomainId=2

Not the answer you're looking for? Browse other questions tagged citations reference-request or ask your own question.

25
How to read a research paper with too many references to previous works?
10
Common practice for references to articles with different spellings of author's names
10
Percentage of the world population with subscription journal access?
8
Should references in foreign language be translated to make popular audience get familiar with how academia works?
3
Why does a professor cite his own works with unbelievable proportion?
1
How do I track down articles referenced in the article I'm reading?
2
Is it ok to have a paper with no academic citation but just think tank and investigative journalism?
6
Is there a tool to visualize the citation network which works with Google Scholar?
24
Is it appropriate to cite a piece of academic work when the author has been charged with child pornography?