Tattoos in the Workplace

I'm an undergraduate mathematics student finishing my degree. I plan to go to grad school, and ultimately aspire to become a professor. I really like tattoos, but I'm hesitant to get one because it could affect my future job.

Of course, if I did get one, it would be discrete and innocent. What I really want is the axioms from ZFC wrapped around my upper arm.

I'm very interested in hearing people's thoughts on tattoos in the workplace, particularly from people who work in mathematics. Do you think it is acceptable? How would you judge someone based on their tattoos? Do any of you have tattoos? What are your experiences?

Tattoos that can be easily concealed in sensitive times (during interviewing, etc.) should never be a problem. Further, academia is in general a pretty tolerant place when it comes to looks. As Suresh says, we are used to much weirder things in terms of look than a small tattoo. You'll be fine.

I don't have any tattoos, and I work in CS, which may be a little more relaxed than mathematics. I would have no negative reaction to seeing someone with a tattoo, and would merely be somewhat envious :).

I've had colleagues who wandered barefoot in the hallways, and others who rarely showed up in anything other t-shirts and shorts.

The answer is, unfortunately: It Depends. There are indeed people who will judge you on a tat or piercing or other body mod, just as there are people who will judge you if you come to work in ripped jeans and a T-shirt with three different colors of housepaint and a layer of cat fur. This tends to be less of an issue in places where you either aren't dealing with customers who might react badly, or are expected to be a bit eccentric; academia and "research" types can get away with more than folks in the main line of business can, and sales personnel are generally expected to be well-turned-out but otherwise non-distracting so the customer can concentrate on the transaction.

If it isn't something that's displayed during the interview or at work, it's unlikely to ever be an issue. If you want it more visible, you are gambling. It's not a major risk, but don't assume it's 100% harmless.

And of course a tat which implies you're involved with anything resembling a violent or hateful group is likely to get you invited to interview elsewhere.

Basically: Don't be stupid. If you do it, get something tasteful, don't shove it in people's faces and force them to react when they'd really rather not deal with it, and for gods' sake don't get a tat until you've wanted the same design for at least a full year. (If in any doubt, friends who do skin art tell me, consider a temporary and see if you keep buying and re-applying it.)

Like this one (not mine)? I guess it won't make you any problems. 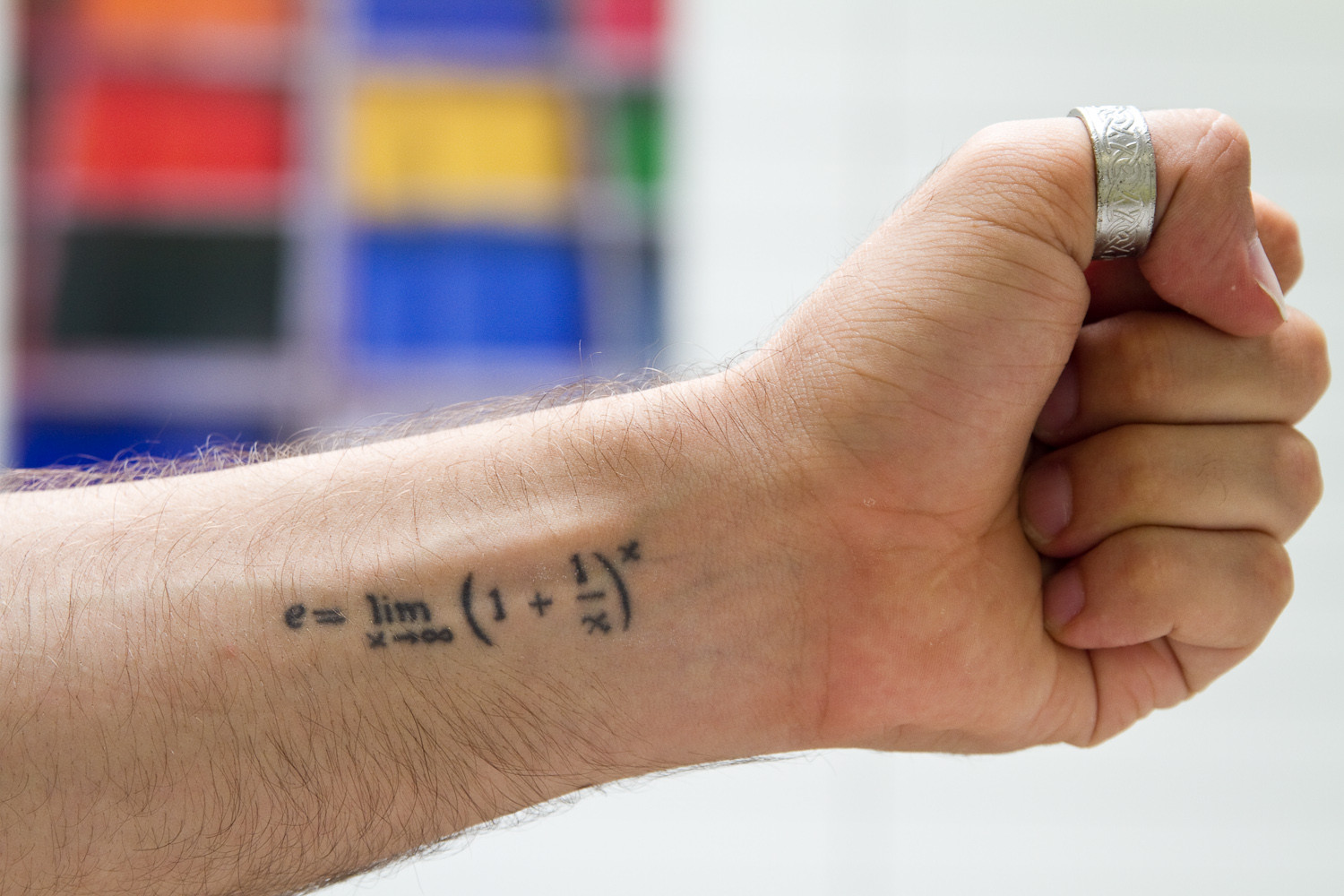 In most places in academia people do not care that much how you look (as long as you dress decently). But it may depend on the culture of a particular place.

However, the aesthetics, size and content of the tattoo may matter. You referred to a geeky tattoo, but if the tattoo associates you with a group that is (even subconsciously) looked down in academia (e.g. that is which is, or is perceived as, expressing unpopular views, being less or anti-intellectual, etc) - it might be a different story.

In this day and age in America, I think most people are so accustomed to seeing tattoos in different settings - including academia and the workplace - that it's not an issue at all. In your case, especially something that shows your passion for math, I don't see it being a problem. I got my undergrad in Math. My career is a Unix sysadmin. I work in Silicon Valley at a large internet company, and quite a number of engineers and programmers here have tattoos. I personally have tattoos but they are mostly on my upper arms and get hidden by my shirts.

I think that many here have made great points, but having worked in academia (administrative) for many years, currently it would be ill advised for you to get a tattoo (small or big, classy or otherwise, provocative or mundane) that is visible or has the potential to be visible. Most search committee are still old fashioned today; I hope that once you are on one, you'll work to change this bias, but in my opinion, as for now, it still stands.

You cannot live your life according to other people's illogical rules, as to what you are going to do with your body, hair, clothes, skin. Standing out from the rest of the crowd, either being prettier, cooler, having long-hair, tattoos, working-out is always a double edged sword for all work environments. Some people will like you more and respond to you positively, other will hate your guts. As other answers have stated, Academia is one of the most tolerant workspace you may encounter. So, you probably will not have a problem either way.

"Raising a flag" by showing hints of your real personality (besides your academic achievements) may also make other (academic or not) people approach you easier. In this way, it might also help in some cases. As for the others who respond negatively, who would really want to collaborate with someone, who judges people strictly by their looks?

I believe Tattoos are a great way for self expression and shouldn't be restricted,having said a person with visible tattoos are frowned upon in the academia/ business circles. I am a PhD Student in the US and my professor has a small tattoo on his hand. I guess small tattoos are ok, but bigger graphic ones maynot be a good idea.

-1
Tattoos in academia..and CV
57
What is the effect of a PhD student dyeing their hair blue?
66
Is there a standard of professionalism in academia requiring me to hide self-harm scars if I'm otherwise comfortable leaving them exposed?
34
Are search committees biased in terms of a candidate's looks, such as long hair for men?
17
Handling "contraband" tattoos in closed-book exams
5
Academia's view on body modification

3
What should I put in the "about me" section of an academic job talk?
13
Wearing dressy clothes in the "lab"
18
Is it significantly inappropriate to wear clothes bearing the name of University X, when working as an official employee at University Y?
10
Appropriate attire for a graduate school interview in the US
2
How do I tackle the interview question "why join here and not your former college"?
5
Academia's view on body modification
1
Asking about the results of interview