Associate Professors without a PhD?

The title "Associate Professor", which is commonly used in North America, is "usually connected to tenure" in that it is almost exclusively given to tenured or permanent professors who are higher in rank than Assistant Professors. This has also been explained in previous Academia.SE questions, for example:

Within the last year, someone also asked here about the awarding of the Associate Professor title to people without doctorates: Is it true, that there are associate professors, full professors and University provosts without a doctorate in the Western Continental Europe?, and we learned there that in UK there are Professorships awarded in Law and Engineering (and I wouldn't be surprised if also in Medicine) to people without doctorates.

I wonder if there's any precedent for people being given this title without a PhD in Canada? I wouldn't be surprised if people have this title after getting a JD, MD, PharmD, PEng, etc., so even more specifically I am wondering about people who have only an undergrad degree and/or Masters.

The reason for my question, is because it looks like a U15 university in Canada (I might as well just say openly that it's University of Waterloo) says that they will be re-labeling Continuing Lecturers into Associate Professors: 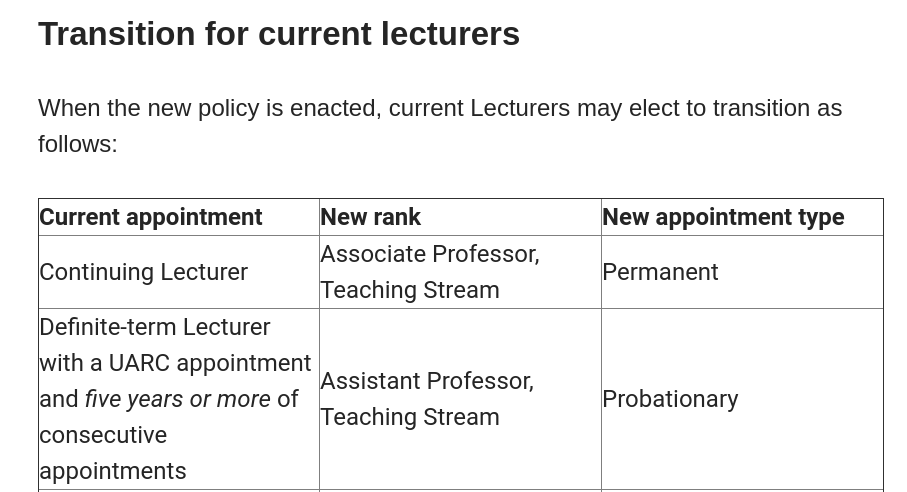 Continuing Lecturers (soon to become Associate Professors), often enough do not have a PhD (for example here and here). I understand that other Canadian universities (e.g. University of Toronto and McMaster University) also have the "teaching-stream Professor" positions, but advertisements for applying to those positions suggest that a PhD is required.

Since Charles Grant astutely pointed out that Freeman Dyson's full professorship at Cornell was without a PhD, I'd like to be clear that I'm not looking for "one-time exceptional cases" that lasted only 1 year and went to someone who helped Feynman get the Nobel Prize, but more for "regular" positions that are offered frequently (e.g. there's at least one job advertisement at the university per year for a job with the "Associate Professor" title).

There are many precedents, especially in the older (possibly now retired) ranks. During the 70s and 80s, there was considerable expansion of the sector and some positions were filled by candidates without PhDs.

This is much less common now because of the oversupply of PhDs in basically every discipline. As with anything there are exceptions so I’m sure it is still possible to get tenure without a PhD, based on the body of work. I can imagine for instance that some departments (v.g. law, political sciences, music, art) would hire experts (former ambassadors, politicians, other public figures) as faculty members, based primarily on their professional expertise and experience rather than their academic qualifications. However, such higher profile hires rarely get tenure by progress through the ranks: they will usually be hired with tenure.

Not the answer you're looking for? Browse other questions tagged phd canada assistant-professor lecturer associate-professor or ask your own question.