How to learn to prepare good scientific illustrations?

I have recently started to appreciate the importance of illustrations and figures in scientific publications. Be it a visual abstract, a visual TOC, or part of a poster or a presentation, I always find a nice illustration to be quite catchy. Because of this, I want to put in some effort and learn what goes into preparing these illustrations.

Of course, I have the usual problem: I was never good in arts, and I can't really put my thought into a visual illustration, nor make the eventual idea into reality. Since I am working in theoretical physics I think I also have a harder time than some other sciences - the objects that I am working with are usually mathematical objects and proofs, and I can't really draw an equation, can I?

In contrast to illustrations, however, I've spent quite a lot of time on learning how to create good plots. In the case of plots I always had clear guidelines: from a given data, create a visualization that follows some basic principles with color scheming and choosing markers; using then the right software it's not hard to create visually appealing graphs. There's very little creativity involved in this process though.

Are there any similar "guidelines" for creating illustrations not based on qualitative data, rather abstract ideas? Is there maybe a book and/or a course that I might take?

I understand that scientific art and communication is a field in itself, however I am hoping that if I put in the time and effort, then, using the right tools, I could at least be mediocre in preparing illustrations. Or is creativity a pre-requisite for all of it?

For some fields, the (several) books by Edward Tufte set the standard. But a search of, say, Amazon for "Data Visualization" or "Scientific Illustration" will turn up a vast library of work. You can also add your field to the search to get a more specific selection.

But, like most things, the way to learn it is to practice and then practice more. Then try to get feedback on your efforts. Perhaps a colleague will tell you what the "see" in your work and you can compare the answers with your intent.

One of the great advantages of professional work is that it allows specialisation and gains from trade. One option you have is to hire an artist to create figures for you. There are a number of artists that specialise in scientific artworks, many of whom have a reasonable amount of scientific literacy to help them "tease out" how to visually represent scientific objects, concepts or ideas. Such work would usually require you to pay some money for services, and you would also give credit to the artist for the artwork in your paper, but it is likely to give you a much better illustration than if you create it yourself.

For scientific posters: There is a guy named Mike Morrison who has done a lot of work to make scientific posters better for the viewer. The concept is to make the main point (or take-home message) into a sentence or statement, and make this the focus of your poster. I've included an image to show this.

With standard posters, people oftentimes will read your title then ask you what the main point of your work is about. Having the main point front and centre tells the viewer this main point (without them having to ask), and then the viewer can ask you more in depth questions.

The benefits of using this design included:

I also recommend making sure your advisor is ok with using a format like this.

Image: This is an example poster. The main finding or take-home message is central to the poster. Additional information can be found on the side panels for you to reference when talking to someone, or for them to read on your own. Source: https://www.insidehighered.com/news/2019/06/24/theres-movement-better-scientific-posters-are-they-really-better 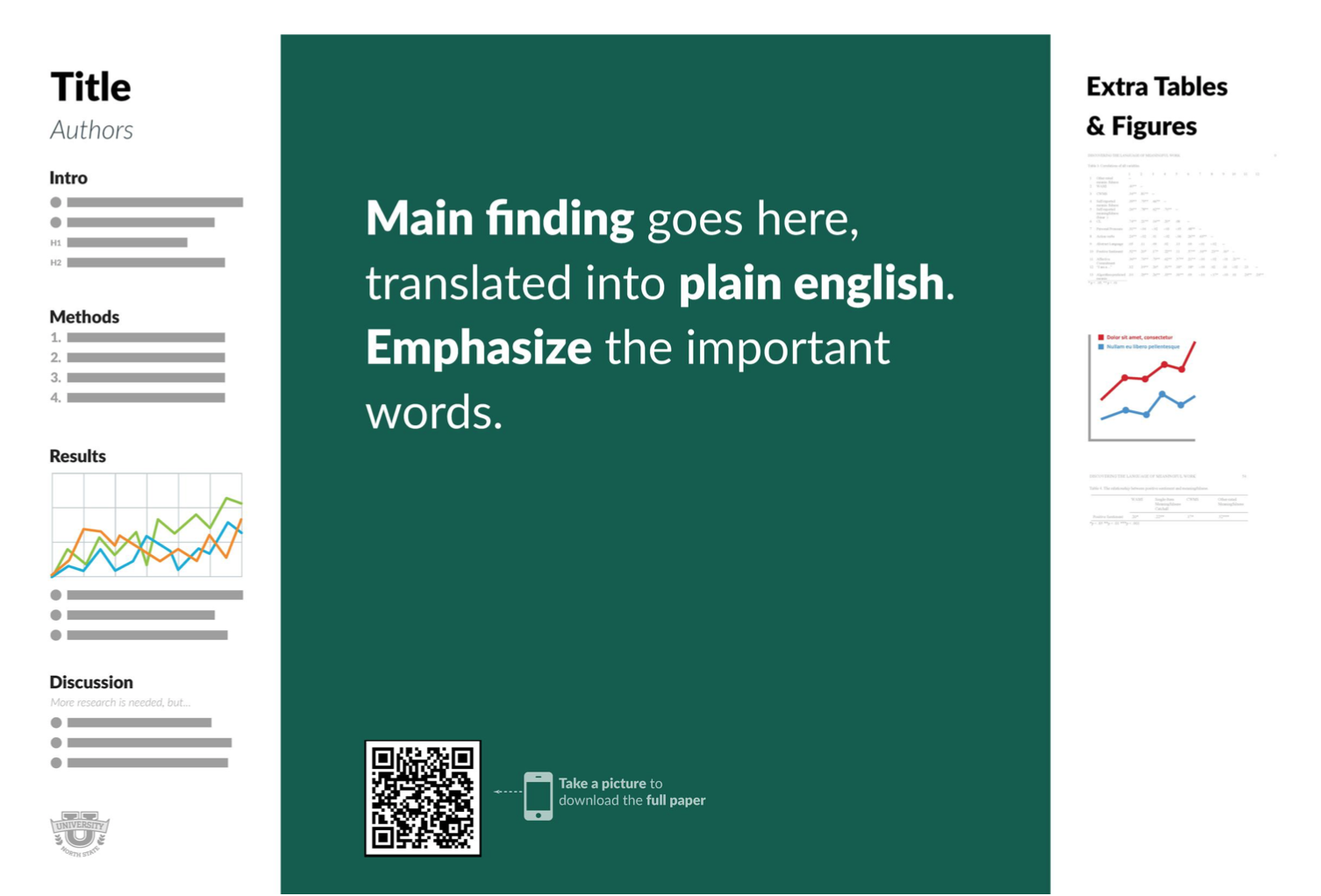 Not the answer you're looking for? Browse other questions tagged publications presentation graphics science-communication or ask your own question.

10
How to prepare a Journal Club (or Methods) presentation?
92
Are there good reasons to avoid using color in research papers?
37
How did authors prepare figures in their publications before the advent of computers?
13
How to learn commenting on graphs and tables the right way?
6
Is there any standardization of figures for scientific publication in any field?
9
How to do a good remote presentation?
76
How were scientific plots made in the 1960s?