Which software is used to write scientific textbooks, especially in engineering?

Which software do learned professionals use - LaTeX or Google Docs or Word or any other software to write their books (especially engineering level scientific textbooks)?

What publishers and authors choose or prefer for document processing really depends on the discipline.

Your profile says you are interested in "Electronics and Communication Engineering". For that kind of technical writing I suspect LaTeX is the system of choice, both for you and for your publisher.

It's easy to prepare large documents with several files. LaTeX manages citations, diagrams and images. As an author you focus on content. The publisher can then make format and design decisions that require no retyping.

The folks at TeX stackexchange will gladly help you.

I've written several books, maybe a bit "advanced", in mathematics, and I've used plain TeX in all (due to getting committed to plain, as opposed to La-, TeX, to be able to manage small formatting details that my publisher 25 years ago could not cope with...)

But, yes, some dialect of TeX.

For diagrams, I've used xypic, which is by now old-fashioned, but still adequate for my purposes.

By this year, it is a bit silly to use plain TeX, since competent publishers can do whatever reformatting on their own (rather than complaining that when they print out your draft, and hold it up to the light, the page numbers don't match up... sigh...) Plain TeX does obligate one to load fonts and stuff, which, yes, I figured out how to do ages ago... at at time when, also, the RAM in many computers was awkwardly small to include the actual font files for everything, as opposed to the font metric files... and that kind of lower-level stuff.

I gather that a slightly more modern, but maybe still several-years-old, graphical package for (La)Tex is "tikz"...

In any case, I'd wager that 99% of academic math people in the U.S. use some version of TeX for substantive writing. Yes, I can imagine that some might be coerced to use "Word"... but I'd tend to think that with current personal-computer capabilities, the end-product of a PDF document would be viewed as acceptable, regardless of the "engine" that produced it.

A few years ago I was the lead editor for a business engineering textbook. Right at the beginning of the project we had to clarify the question of which software to use. In this field, LaTeX is largely unknown because everyone uses Word. But since it was already clear that the book would have well over 1000 pages and Word has problems with such large documents, we decided on LaTeX. This was also due to the fact that the manuscript had to be a unified whole in order to reduce errors in the typesetting and thus the time needed for corrections. (This publisher had outsourced its editing to a country where non-native speakers worked on it).

The publisher provided us with an adapted template in which we worked. The finished manuscript in LaTeX was then converted internally by the publisher into a custom XML format, on the basis of which the typesetting was carried out.

We could also have submitted data in Word, PDF, HTML, RTF or other formats; this is all converted internally by the publisher. Don't worry about what format the publisher wants, but think about what you can work with best.

Publishers of books are normally pretty flexible about what they accept from authors. They don't want to put up barriers. It needs to be something that works for the author and that the production staff can work with. For textbooks there is usually a "copy editor" involved as well as a production staff. The publisher seldom (in my experience with three large publishers, though a bit dated) asks the author to produce final page proofs. Those are done by professionals.

The author is, then, required to proofread those pages and quickly provide any needed corrections. What happens in the background may be LaTeX or some older typesetting technology, though probably not hot lead anymore.

They might even provide professional help on preparation of images for the final copy.

A publisher may have preferences, but for books, probably not rigid requirements.

Over the past few decades, I’ve written hundreds of technical documents containing diagrams, tables, and mathematics, including a 400 page book about computer geometry.

Prior to starting the book, I used MS Word for everything. For the book, I switched back and forth between Word and LaTeX 3 or 4 times, and eventually settled on LaTeX. I still use MS Word or Google Docs for everything except books.

It took me a very long time to get the formatting set up the way I wanted in LaTeX. The memoir package was a big help — in the LaTeX world the solution to every problem is “there’s a package”. But your publisher might give you a document template, anyway, so you’ll have no choice about formatting.

Creating tables in LaTeX is ridiculously complicated, compared to MS Word. For diagrams, the TeX purists favor tools like Tikz and Asymptote, in which you essentially create a picture by writing code. I find this approach impossible, so I make pictures in drawing packages, or PowerPoint, or CAD systems, and include them in the LaTeX document as PDF. That works fine.

I think LaTeX is faster for simple in-line math, but for big complex equations, I find Word faster because I can see the equation emerging as I type it, so I make fewer mistakes.

In the end, I chose LaTeX because I very much like the appearance of the Computer Modern fonts, and getting those to work in MS Word was painful. But some publishers will insist on changing fonts, anyway.

A lot of folks in the TeX/LaTeX community dislike MS Word or any other software that costs money. So, there’s quite a bit of anti-Word propaganda, some of which is out-dated folk-lore. The people in the Word community don’t have a corresponding dislike for LaTeX because most of them have never even heard of it. So, as you’re reading, you’ll probably find that Word critics are more common than LaTeX critics.

A little late, but I just ran across some actual data (as opposed to all the speculation and opinion in the other answers, including mine). There was a study of LaTeX usage by François Brischoux and Pierre Legagneux, published in The Scientist in 2009 (Volume 23, Issue 7, Page 24). I don’t have access to the original paper, but I suppose the following table, which was reproduced here is a good summary: 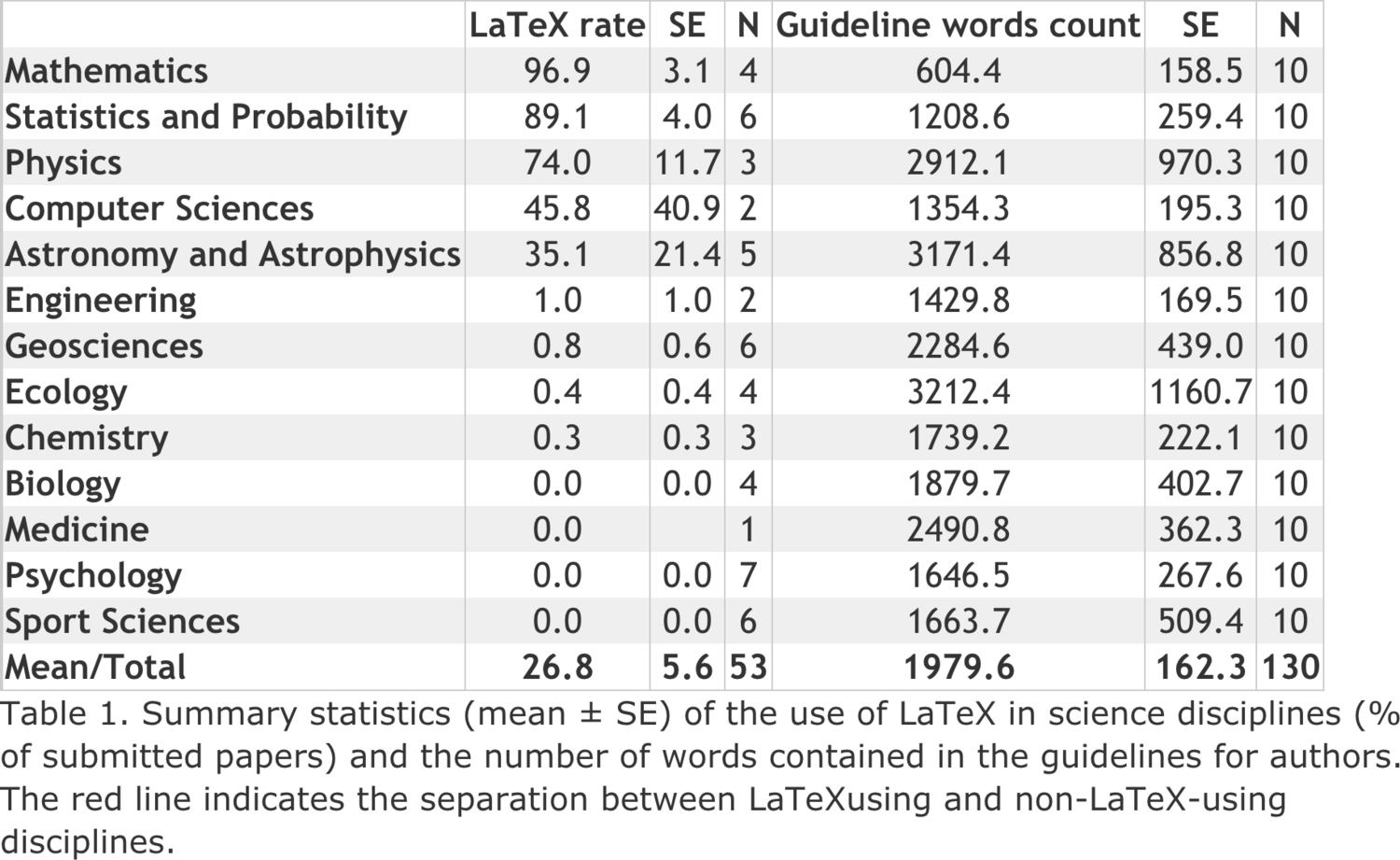 Things may have changed since 2009, of course.

Many of the other answers here are trying to tell the OP which authoring system is “best” in some sense. That’s not what he asked — he asked which ones are most commonly used. But, if anyone is interested, there’s some data about “best” in this article, published by Knauff and Nejasmic in 2014. In their tests, they found that using MS Word yields higher productivity than using LaTeX. YMMV, as always.

If you're working with a publisher, ask them. Chances are they accept virtually all major software. TeX is the obvious one for scientific text, but Word is also fine if you know how to use it. If you're self-publishing then it really doesn't matter, whatever works for you is fine.

Could have diagrams, images, tables, graphs at quarter or half or complete page or in-between the text

If you're working with a publisher, this matters only if you need to refer to other pages while you are writing the manuscript. Otherwise it is irrelevant, do not worry about it. That's because by the time the manuscript's been reformatted it will not look like what you submitted and all the time you spent on this will be wasted. If you're self-publishing then whatever floats your boat.

Divided into chapters, should it be a different doc for each chapter in a Word/G.Doc like software?

Again if you're working with a publisher, this is irrelevant. If you're self-publishing then whatever floats your boat.

I sometimes help edit high-school mathematics textbooks, which have most of the requirements you mention (not citation management) and are published by an academic press that also does university textbooks, so I expect the process will be similar enough.

This kind of publishing is a group project. Authors generally aren't responsible for their own layout, just for providing the words/equations. In my experience that's usually done in MS Word, using either Mathtype or Word's equation editor; I can only remember one time when an author worked in LaTeX. (NB most of the authors I work with are high-school teachers; I suspect there'd be more LaTeX users among university academics.)

Other editors/etc. then format that material for house style, create diagrams according to the author's sketches, and lay it all out to generate a tidy PDF, usually one per chapter.

Breaking it up into chapters not only keeps file sizes manageable, but also helps with workflow - since there will be several different people working on the same book, you don't want to have each person go through the whole book before the next person in the sequence can start.

You had all kind of reasons to use LaTeX in other answers. The extra few you may want to consider:

CON that is actually a PRO

EXCEPT for equations, where anything more complicated is beautiful but requires a second CPU in your head to follow the \int{\frac{a\frac{\times}{... where am I...?

Not the answer you're looking for? Browse other questions tagged books engineering software latex or ask your own question.

2
Management after Software Engineering undergraduate degree or separate management masters degree?
164
Why do many talented scientists write horrible software?
77
Should I learn to use LaTeX to write up a History Masters Thesis?
15
How common is it that professors have their students write textbooks?
1
Which survey software to use?
36
Why don't more academics write textbooks?
3
Which authors to cite for open source software