Is it common for Chinese nationals to turn down review requests?

I am an associate editor for some international scientific journals. Unsurprisingly, I receive a number of submissions from Chinese scholars (working in China), which go through the standard peer review process and publication. However, when I ask Chinese researchers, working in China, to perform reviews they either never reply or turn down any invitation based on not being able to access files or external systems. This is not the case with Chinese scholars working in other countries.

This may well be just my own unlucky personal experience, but it seems to be a consistent phenomenon throughout several years already.

Are there any ethical implications of this? This is, publishing but never refereeing? Or is it that I have been unlucky for several years?

Your experience does not match mine - Chinese researchers accept reviewer invitations just like everyone else.

Statistics also indicate that Chinese researchers do perform peer review. As a group, they submit more articles than they review for (along with Indian & Iranian researchers) but they also perform more peer review than any other country's researchers except the US (albeit not on a per capita basis). 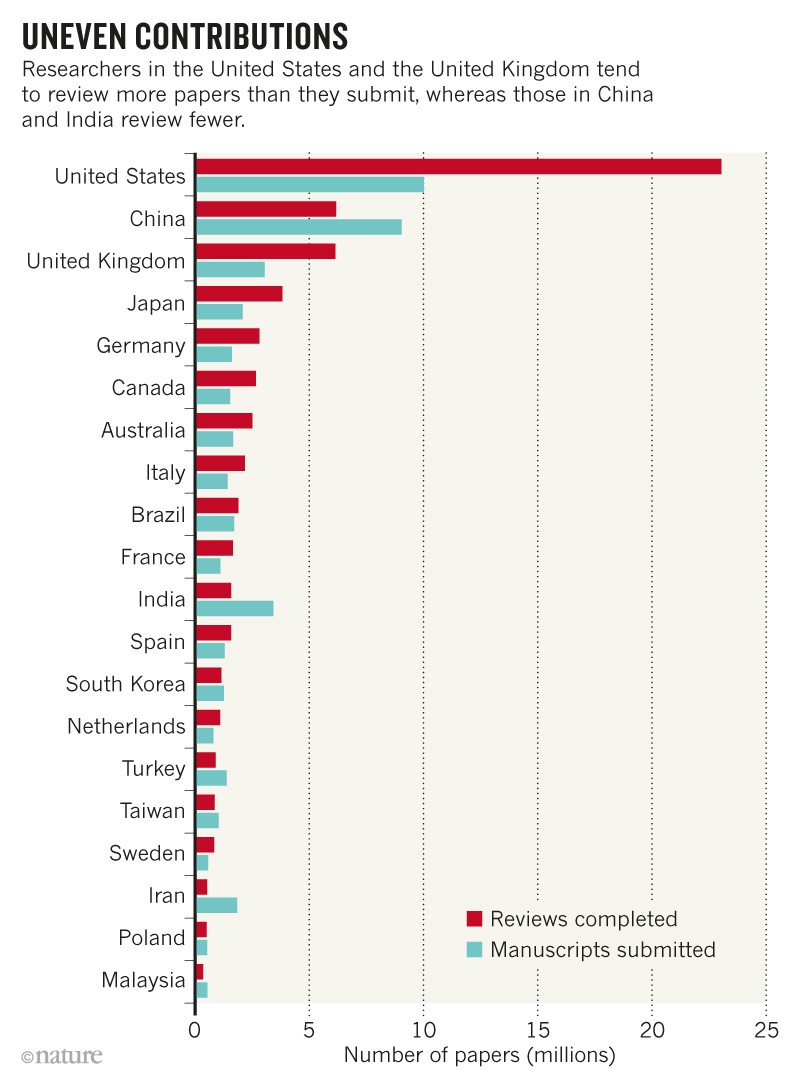 Internet in China is highly regulated and many usual Web sites are blocked there, say, youtube. It could be that the site of your journal is indeed not accessible there.

"Internet in China is highly regulated and many usual Web sites are blocked there, say, youtube"

and expand it by saying that even the sites that are not "blocked" (blocked sites include Google, Facebook, Twitter and their subsidiaries like Youtube, Gmail, Instagram, etc.) cam still be extremely slow even at the four star hotel in which I stayed for 1 month while visiting scientists there. In July 2020 I asked a Chinese professor at Qingdao Institute for Theoretical and Computational Sciences (QiTCS) in Shandong University to answer a question on Stack Exchange and he asked me to copy and paste his answer into Stack Exchange myself, because:

which at first I didn't believe, because Stack Exchange is not blocked in China. But I asked professors at a completely different university to answer something on Stack Exchange and when the same thing happened, I asked my trusted Chinese academic colleague who told me:

"I chatted with Qu and he told me that he cannot visit Stack Exchange. You visited here before so you know why :-(

Perhaps of the two of them Ma is more familiar with Internet stuff (He works for the HPC centre of CAS), he will give it a try later.

Qu is not here and will be back in several days so we can meet in person and talk about that."

"I think it is because that stack exchange is depend on some service of google or some other CDN blocked, which made the webpage cannot be loaded properly, or at least extremely slow. I checked and found SE is not blocked. However the internet connection is affected by too many reasons. From my own experience, when I am at home, visiting foreign website are all too slow to visit, even they are not blocked, although Chinese websites are as fast as usual."

Finally, let me comment on a completely different aspect of your question which has less to do with the specific components about Chinese nationals:

"Are there any ethical implications of this? This is, publishing but never refereeing?"

Journals do not pay referees and yet they make a lot of money (almost always) or in cases that appear to be completely altruistic they serve the interests of the people who run the journal in some positive way, at least enough for those people to continue running the journal. I personally have not had a salary since 2018, and while I do still referee papers and take it very seriously, you cannot expect everyone to do it, all the time. Should people who refuse to referee papers be banned from publishing? I don't think so, but if you do ban them, they will publish somewhere else and your journal may miss out on publishing 100s of papers over the course of that academic's group's life span, and since journals typically charge about $30/paper when people don't have a subscription (and annual fees in the thousands for institutions), the journal may lose money or popularity.

If it's a problem for you that people are refusing to referee papers in your journal to the extent that it is making a significant impact on your journal's prosperity, consider suggesting to the higher-ups to come up with better ways to make it worth it for the referees (e.g. more "referee of the month" awards, gift cards, or maybe a small honorarium as a token of appreciation for the work they do to keep your journal running).

As a (former) associative editor, I can assure you that it is very difficult and highly frustrating to find reviewers. Reviewers do not get rewarded, especially outside academia, and a good review can take days. My average is probably an afternoon plus some time to think about it.

Some highly regarding academics only review for conferences / journal that they themselves submit, and the custom of giving reviews to graduate students so that they learn how to do reviews and discuss it with their supervisors has pretty much finished because it is now considered a violation of confidentiality. Struggling assistant professors will be jaded by their experience and not so willing to do unrewarded community service. If we use the usual number of three reviewers, everyone with a Ph.D. should review at least three times the number of papers they submitted.

My recent experiences do not agree with yours (which just shows that anecdotal data is not very trustworthy) nor does it agree with the nice statistics in a previous answer. I had much better luck with Indian and Chinese academics than with US academics, which are in general much more likely to accept invitations than people in industry.

Finding reviewers is extremely frustrating and I run into free-loaders, which is upsetting. And then, after I scurried google scholar for potential reviewers, get no answers or non accepts, the editor sends me an automatic email telling me how important a short time in review is.

One may ask: what happens if nobody referees anything? Still I don't think the sky would fall on us in this case. Something would probably have to change, for example, journals would have to pay referees, or some other solution would be found.

For example, Feynman avoided refereeing anything (https://www.aip.org/history-programs/niels-bohr-library/oral-histories/5020-4). Feynman: "I myself don’t referee any papers." Weiner: "What was your attitude on that?" Feynman: "(I don't want to give a long quote here, but it is very interesting)".

Not the answer you're looking for? Browse other questions tagged publications peer-review ethics editors or ask your own question.

30
How many papers should I be reviewing as a referee?

12
Festschrift articles: is the peer-review as strict as for other papers?
66
Should I accept review requests from dubious journals?
18
Is scanning an handwritten peer-review suitable for editor/authors?
11
Editor didn't invite for a second review
24
Is providing a slow response to journal reviews a common/good strategy for minimizing the number of review requests?
6
Asked editor for review prolongation to do further experiments, can't meet deadline. What do?
28
Personal repercussions for those who actively ignore review requests?
3
Seemingly minor revision under review for two weeks. Is this common?
5
Should startup-company founder accept peer-review requests?
5
Handling collaboration requests from the authors of double-blind reviewed papers (after submitting the review)