arXiv is running out of IDs — is their solution known?

I just noticed that arXiv.org is basically running out of monthly IDs, as can be seen in this graph (source [13-12-09]): 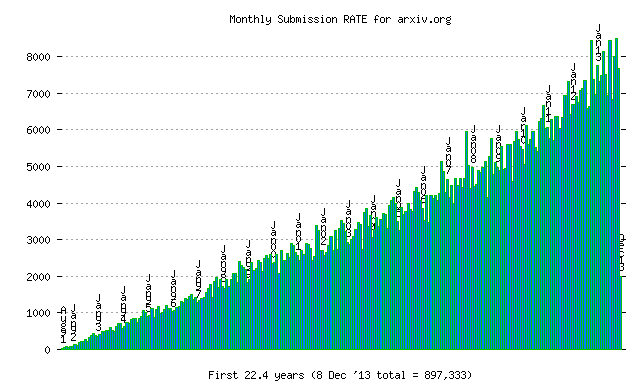 They have gone over 8000 monthly submissions 3 times in last 1.5 years. With the steady increase in the number of submissions, it can be expected that it gets over 10000 in cca 2 years. However, the current ID format is restricted to 4 digits, i.e., 10000 submissions.

I haven't found any information regarding this on the webpage. So: How will the submission IDs look like if they don't fit into the scheme? It interests me because in some helper applications, I tend to rely on the yyyy.xxxx format of the IDs.

The format presumed in the question is incorrect. The format is YYMM.NNNN, rather than YYYY.NNNN. Shortening the year to YY and including the month as MM gives a factor of 12 increase in the number of available IDs. Version numbers are appended to the ID, as v1, v2, and so on. That said, it is still a problem, but arxiv have thought about it.

NNNN is a zero-padded sequence number starting at 0001 and permitting up to 9999 submissions per month. If current growth rates continue, we expect to change the sequence number to 5-digits NNNNN in 10 to 15 years. We will do this in a uniform fashion so that, likely starting on some year boundary, all subsequent identifiers are zero-padded to 5-digits. We cannot currently anticipate extension beyond that although extension to 6-digits would be possible.

This was posted in 2007 so we are 6 or so years into their 10-15 year window. Submissions of multiple versions might grant some extra headroom, however it does appear that we could run into problems in about two years. It looks like they underestimated their growth a little bit!

Status change in 2015. arXiv.org switched to 5-digit IDs in January 2015. The format is now YYMM.NNNNN or YYMM.NNNNNvV.

Not the answer you're looking for? Browse other questions tagged publications arxiv online-resource or ask your own question.

18
How many arXiv papers are uploaded in their final (refereed) versions?
39
Should an undergraduate claim ownership of their article uploaded on arXiv?
17
Is there any (known) way to have Arxiv waive the endorsement requirement?
10
Why would a conference discourage authors to submit their papers to pre-submissions platforms (e.g., arXiv) before submitting them to the conference?
2
How can I find out under what license a title was submitted to arXiv?
0
How does one manage to “time stamp” their physics paper without submitting it to a preprint server like arXiv?