Why do people sign their names with only their initials?

In my field at least, a lot of people sign their papers with just their initials. For example, the author list would be "J. Doe and S. Omeone". Why do people do this? It seems that it's just a recipe for creating homonyms-related problems. I can't see a reason to not include the full first name in the publication.

There are many reasons not to include a full first name.

This is an example of a social norm, which is a type of behavior that, once it becomes accepted by a group of people, perpetuates itself through group members’ tendency to adopt others’ behavior, perhaps out of a desire to not want to stick out or to be seen as unconventional.

So in my opinion, one good answer to “why do people sign their papers with just their initials?” is “because this is the norm in their field, which has developed because scholars of past generations adopted this practice.”

As for why this happened historically, it could have been a random event, or journals demanded it, or some famous scientists decided it was a good idea (e.g., to put the emphasis on the content of the research rather than the ego/personal brand of the author) and advocated for it, or some combination of the above.

By the way, social norms are all around us, so this idea answers many questions of the form “why do [members of group X] do [Y]?”, in particular in the context of academia.

I suspect many contemporary authors use initials because it has become a long-standing tradition in academia. In other words, if it was good enough for A. Einstein, it is good enough for me. 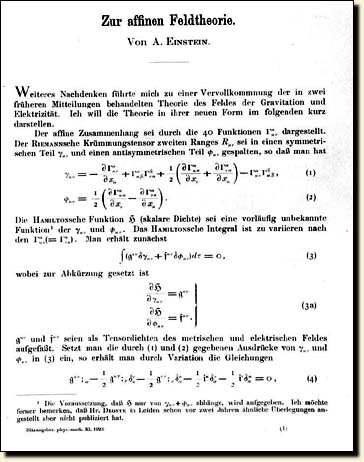 Not sure that was a valid reason 30 years ago, but it is somerimes difficult to determine where the first name stops and where the last name begins, especially when authors are from a different culture.

For example: in certain Asian cultures (e.g. in China) it is normal to write one's family name before one's given name. If you add "middle" names on top of that, things can get very confusing. If as a Westerner you're not familiar with common Asian last names, you might end up referring to a peer as "Dr. Firstname" instead of "Dr. Lastname".

It is also not uncommon for some names to be used as given and/or family names. A good example would be the name Martin in France: it is the most common last name... but it's also given as a first name. Consider literature Nobel prize laureate Roger Martin du Gard: is Martin a middle name? The beginning of a double last name? Hard to tell if you don't know the author.

This type of issue pretty much disappears if one chooses to abbreviate given names and only write their last name.

One possible explanation is that people who reference papers tend to abbreviate authors' names even if they are given in full in the paper (to save place in the references section). Then when it comes to writing your own name as an author of the paper, they follow the same process out of habit without thinking much about it.

I've never spent a conscious thought on this so far, but where I am for most business communication F. Lastname is just as common and acceptable as Firstname Lastname to address/refer to someone. In addition, F. Lastname (even if you have further given names) is acceptable and normal for most signatures.

However, looking though a bunch of papers, I do have the impression that this less the authors' choice than a style choice of the journal. (And some use both: full Firstname Lastname under the title and F. Lastname on the header of subsequent pages). At least for the last papers I submitted, the journal web page asked given and family name of all authors.

That being said, we frequently use F. Lastname for posters and presentations and their abstracts (possibly giving Firstname of the presenting authors so people have a chance to know how to address them): I'm often involved in rather interdisciplinary studies so there's frequently a whole bunch of authors that needs fit into a restricted space.

Having used "A. R. Blass" on some of my earliest papers, I can explain one motivation. These were joint papers with my undergrad teacher Caslav Stanojevic who (like many Eastern Europeans, as far as I know) usually used only initials, "C. V. Stanojevic". I just matched that for the sake of uniformity. In my later papers, I used "Andreas Blass".

I might add, just as an example of the confusing things that can happen, that for the first eight years or so of my life, I was "Raphael Andreas Blass" but was called "Andreas" (or the diminutive "Anderl" because I was a little kid). When I became a naturalized U.S. citizen, this phenomenon of being called by my middle name so confused the officer from the Immigration and Naturalization Service that I had to become "Andreas Raphael Blass".

As long as I'm describing confusions: I've been told that Vietnamese names have the family name before the given name (as in Chinese and Hungarian), but in connection with titles (like Dr. or Prof.) one uses the last name, not the family name. Thus, for example, President Diem of South Vietnam was Ngo Dinh Diem; his brother, the archbishop of Hue, was Archbishop Thuc; his Vietnamese name was Ngo Dinh Thuc.

Not the answer you're looking for? Browse other questions tagged publications personal-name or ask your own question.

4
Author Ambiguity in PubMed Search
49
Should I cite author names as they appear in the journal or as I know them to be complete?
10
Common practice for references to articles with different spellings of author's names
9
Can I choose the initials I want to use when publishing a paper?
33
Why do people sometimes put authors with equal contribution in non-alphabetical order?
15
Whether to include a middle initial in author name on academic publications?
15
How can I prove my publication list is mine?
48
Is it acceptable to cite people without putting the appropriate diacritics in their names?
121
Taking an academic pseudonym?