Would it be appropriate to mark down a student who selected all the answers in this exercise as “correct”? [closed]

Ask Question
Asked 4 months ago
Active 4 months ago
Viewed 5k times
7
Closed. This question is off-topic. It is not currently accepting answers. 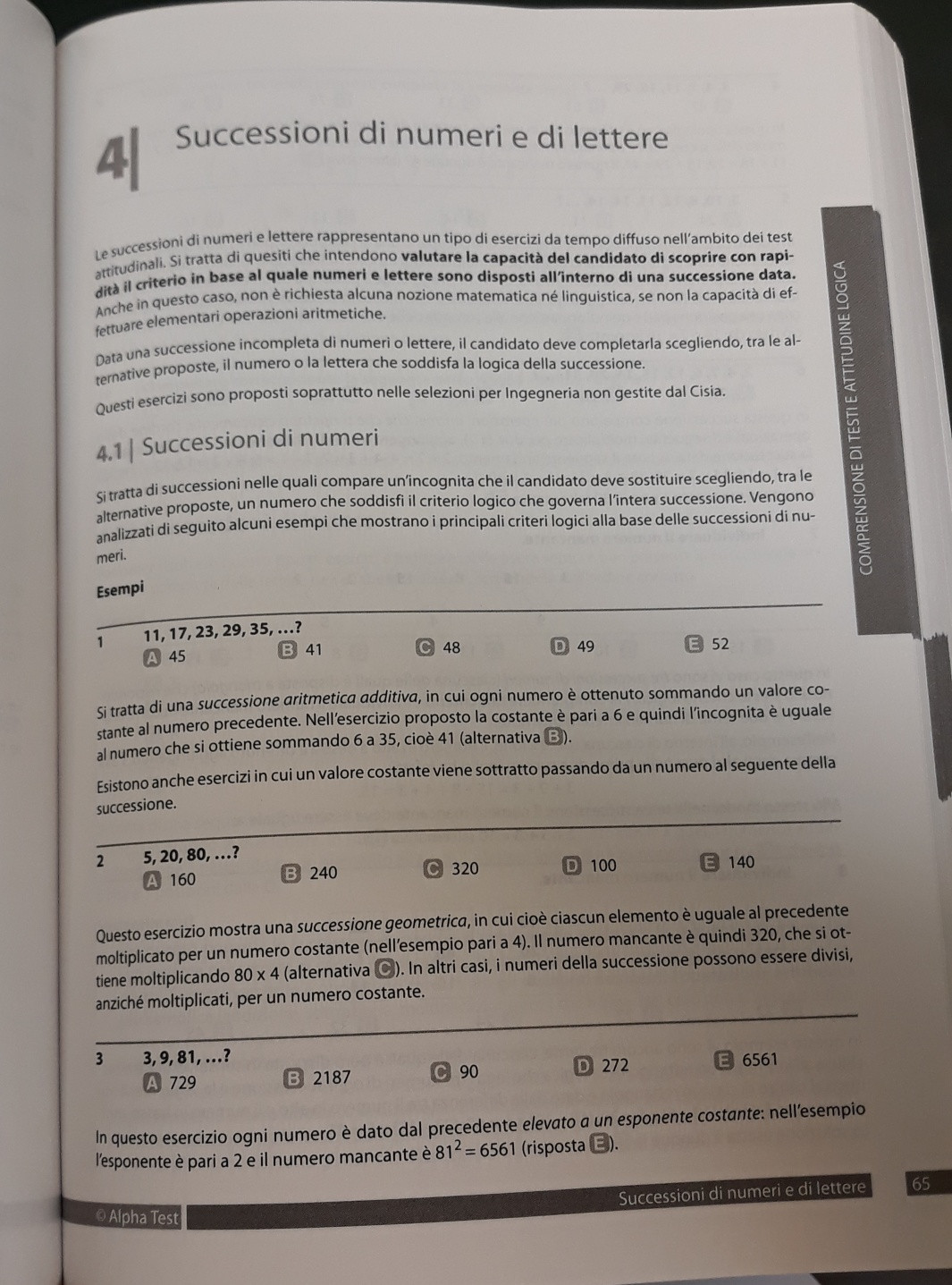 This is meaningless, a finite set of numbers can't define a succession and this is a multiple choice test that doesn't ask to justify the choice: the student can answer peacefully randomly. For example in the question 3 the book say that only E is correct, but we can answer A, if we consider for example the sequence

or B, if we consider for example the sequence

or any other answer. The authors of the test implicitly consider the simplest law the only correct: is this way of proposing the thing acceptable? Am I too pedantic? I only contest the fact that this kind of question is not compatible with the closed form. It would be correct to reject a student who provocatively check all the answers? Please note this is not a question about mathematics (things are simple about that), it concerns the right, or maybe the duty, of a student to respond provocatively to a question he deems wrong. Would it be inappropriate?

Of course strictly speaking this is not a university book, this is a book thought to admission tests. Anyway the target are men and women who are preparing to enter the university, decidedly not kids. I add that if "quickly" is the point, I could think to:

This is simple, quick, correct, but it would be marked as wrong. I didn't know the Stack Exchange room about teaching mathematics, is it possible migrate the question there?

I actually think this is a question about mathematics, or more precisely about mathematics education (and in the limited scope in which it is presented it would be a better fit on the Math Educators stack exchange), but there is a larger academic issue which is perhaps what you are “really” asking about.

The point is this: as educators we try very hard to instill in our students the values of precision, logical reasoning, and attention to detail. When they are sloppy in their answers to our carefully phrased exam/HW answers, we mark off points and wag our fingers at them. We go to great lengths to provide them with examples of well-written, thoughtful, precise, polished answers (and other content) that pertain to the topics being discussed, in the hopes that they will pay attention and seek to emulate that style of discourse.

Given all that, and especially in mathematics where that precision is an essential value that goes to the core of the entire discipline, we cannot afford to ask sloppy (and formally incorrect) questions ourselves. It is a terrible example to give students and undermines the very goal we are trying to achieve. A teacher who is sloppy cannot expect to produce students who are any less sloppy than the teacher.

Coming back to your textbook example, it may depend on the age group this textbook is aimed at, but for a university-level audience the problem you cite is indeed unacceptably sloppy. You are not being too pedantic; a student who answers that all answers are correct will have answered the question correctly (to the extent that the question is sufficiently well-posed that it can be said to have a correct answer) and deserves to get full points for the question and to not have anyone be describing their behavior with the word “provocatively”. Such a student will have shown themselves to be more thoughtful (unless they arrived at their answer by pure luck) and to have a better grasp of mathematical precision than the authors of this textbook.

Although not reliably explicitly made a part of the question, it is widely understood that the "correct" continuation of a sequence is the (allegedly) "simplest". There is still a problem with the notion of "simplicity", since it is relative to context. (The notion of "Kolmogorov-Solomonoff-Chaitin complexity" is a rigorous approach, but certainly not something that kids should be expected to know.)

Beyond that, it quickly becomes murky, because I don't think students are taught "polynomial interpolation" (also known as "Lagrange interpolation"), although I may be mistaken.

So for a student to check "all" as a sort of "protest vote" is not really justifiable, since a student who knows that any finite sequence can be interpolated arbitrarily will surely also know that that's not really the point... :)

EDIT: and, no, _of_course_ there's scant excuse for an awkward version of the question being posed, where there is no unique very-simple extrapolation. Yes, of course, in principle this could happen, and then we might imagine that a student is justified in a protest-response. In practice, in my experience, such questions most often really do have a plausibly-best response, while, yes, in principle, being ambiguous. The fact that, in principle, there's a problem, does not, in practice, create a problem.

Actually, it would be wrong to reject such an answer, but the student had better have evidence to back it up. This is the sort of thing that a teacher might be misled by if they haven't actually developed the question themself. Or worse if they are a "tester" rather than a "teacher". Worst, if they are teaching "by the book", keeping one day ahead of the students as is done too often.

I fear for the student in a situation like this. The "expected" answer is likely looking at only simple progressions and not sophisticated ones.

I once encountered a similar situation, though, thankfully, not on a test.

But if a student had an enlightened instructor they could answer outside the bounds similarly to what you point out here. But an uncommented "checking" of all the boxes will probably not be seen as provocative, but as unprepared.

Gauss was famously hated by his teachers for his brilliance. Or so the story goes.

Let me add, for people who aren't mathematicians here (taken from a comment elsewhere):

While a student at this level is unlikely to be able to prove it, I find it plausible that some students know that for any n points in the coordinate plane, unless vertically aligned, that a polynomial can be found to pass through them all. You don't even need to get to the point of "a unique polynomial of minimum degree".

So, consider (1, 3), (2, 9), (3, 81), (4, k), for any value of k. There is a polynomial, which is a simple sort of function, passing through all of those points. It might even be mentioned as a "teaser" in a relatively low level class. It shows how relatively simple functions can have great power and applicability.

Google-assisted translation from the text at the top of the page, emphasis added:

"...these are questions that intend to assess the candidate's ability to quickly discover the criterion by which numbers and letters are arranged within a given succession. Also in this case, no mathematical or linguistic concepts are required other than the ability to perform elementary arithmetic operations."

(Also: you mention that you opened the book directly to this page, so I guess none of us here know whether there's any further guidance earlier in the book on how to approach such questions.)

This is meaningless, a finite set of numbers can't define a succession

It's not so much meaningless as slightly non-rigorous. Yes, there are infinitely many different sequences with the same beginning, which cover all of the answer options given. But even mathematicians don't need to be 100% rigorous 100% of the time; it's commonly accepted practice to use "..." to mean "continuing this sequence according to the most obvious/simple rule", in cases where there is one rule that is much more obvious and simple than the alternatives.

In this case, I would suggest that 95%+ of competent high-school maths students could figure out what answer the examiners are looking for.

Insisting on absolute rigor in all circumstances is just a recipe for unreadable tedium, even for mathematicians - let alone undergraduate engineers.

As the exam-setter, you can never exclude the possibility that there's something you aren't aware of which could make a multiple-choice question have multiple answers. For example in the 3rd series, even if you write "what is the next number in this power series", how certain can you be that in some obscure field which you've never heard of, "power series" has a different meaning? To illustrate, try this question, which is similar:

Q: Which of the following is a metal?

Technically, all four of these elements are metals - by the astronomer's definition of "metals" as all elements heavier than hydrogen & helium. Of course, by the much more common chemist's definition of "metals", only calcium is a metal. If you had never heard of the astronomer's definition, you would never have dreamed of this objection. I'd actually venture that most astronomers would also never think of this objection and will happily mark (D) as the answer. Indeed, I first heard of this question as a gameshow question where the contestant got it wrong, then discovered via Google that there's actually a definition of metals where his answer was correct, and filed a lawsuit alleging he should be given the prize. Similarly, I will give anyone who tells me "none of the above, metal is a type of music" zero marks (sorry).

You can't rule out every possible objection, but you can say that anyone who's familiar with these obscure "other interpretations" of the question really should be able to recognize what you're trying to ask, and therefore get the right answer. In the absolute worst case, they should object during the exam. The student should know that marking one of the other answers and then objecting after the exam is asking for trouble, and that marking all of them is just as bad (I'm sure the instructions say to only mark one answer).

Not the answer you're looking for? Browse other questions tagged exams books or ask your own question.

4
How can a proof question be asked online?
5
Would the announcement of penalty for blank answers in a test improve the global results of the class?
19
Why is it unethical to share the contents of an exam with students who haven't taken it yet?
42
Test answer rejected for saying more than asked for
4
How to design a computer-based multiple-choice quiz?
7
Is there a standard approach for grading sequence-based questions?
2
Professor keeps students tests. No taking notes home when reviewing them.
32
How to choose a good grading curve for yes/no exams?
1
Is asking questions with very short answers on major exams recommended?
4
How to regrade an exam that was too difficult?