Are there good reasons to avoid using color in research papers?

However, this makes it hard for me to differentiate between the curves. Color is much more effective for helping people distinguish between data (and I’m taking a data visualization class that has research to prove it).

So... can I do this in my research article? I imagine most people are keeping their plots black and white because of printing restrictions on color, but at the same time they include colors in all kinds of other figures in their document. Also, how many people actually read printed articles anymore? For scientific work, I look all of it up online.

Are there good reasons for me to stick with this backwards black-and-white scheme?

I use Cynthia Brewer's website Colorbrewer to pick color schemes. It's also embedded in ggplot2 which is a common choice of graphing package in R. It allows users to specify colorblind-safe and photocopy-able color schemes. It's meant to be for map making, but the idea works for visualization all across the broad. 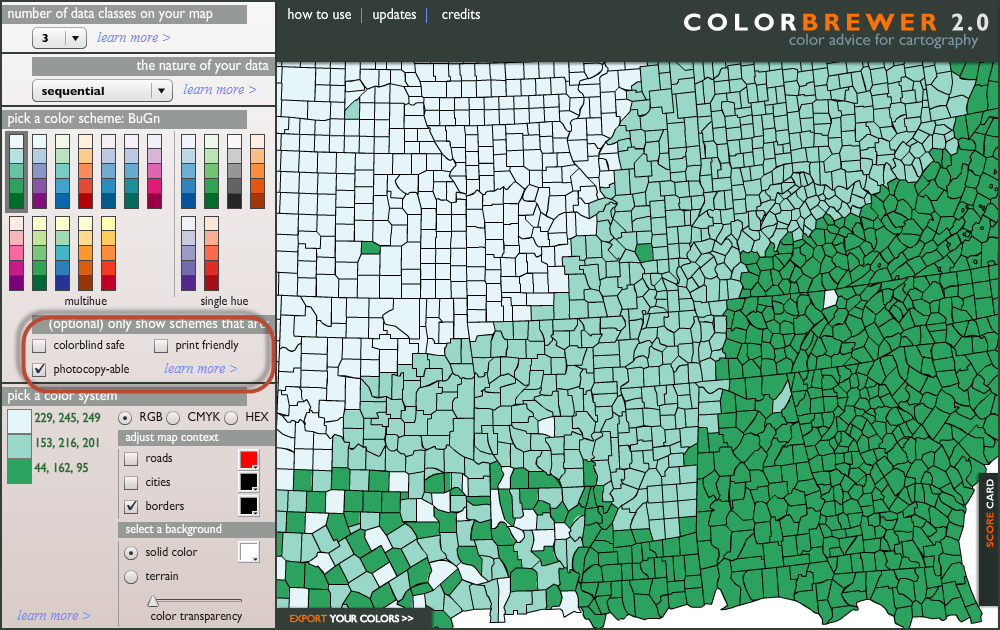 For graphs that are used in more eye-catching media such as reports, posters or infographics, you may consider taking some advice from fashion and interior designers (See the graph below proposed by Japanese Shigenobu Kobayashi). Each combination can conjure a certain type of feeling, color schemes that seem absurd may work in other settings. 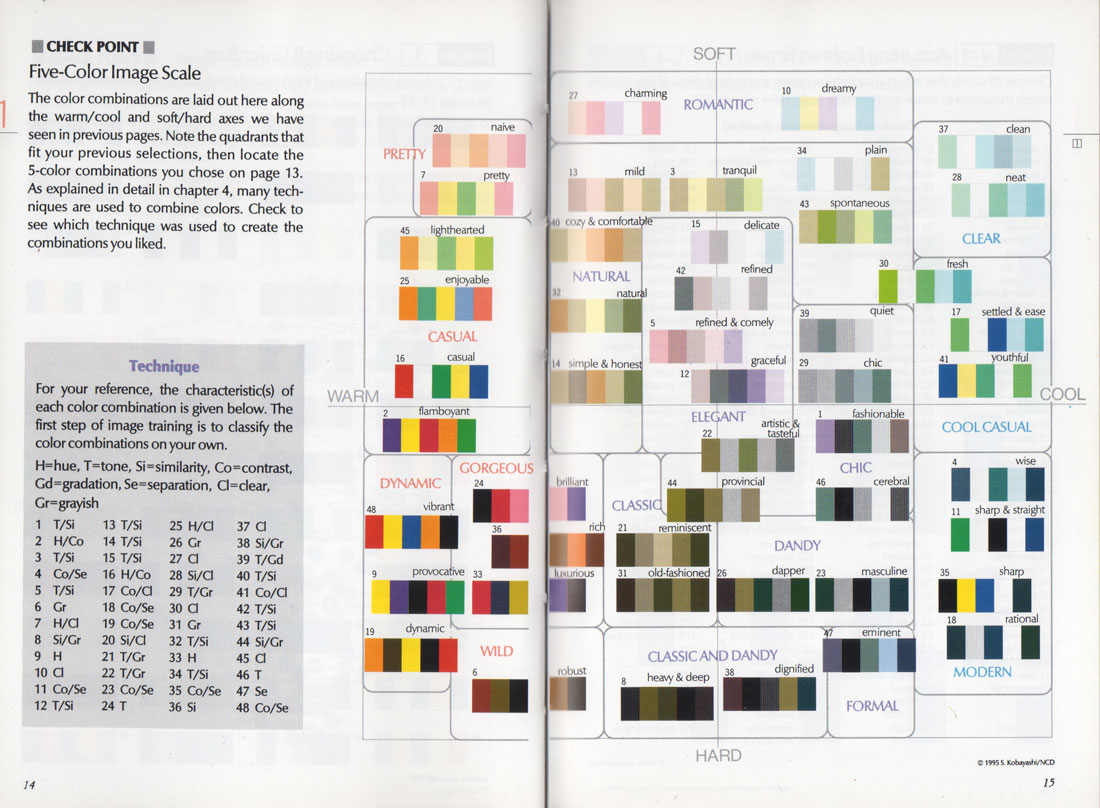 You mention there is research backing up the use of color, which I do believe there must be. Though for that, I'd just like to share another point of view. Bill Cleveland, whom I consider the guru of visualization in science, advises that color should actually be avoided. In his book, he lays out this hierarchy: 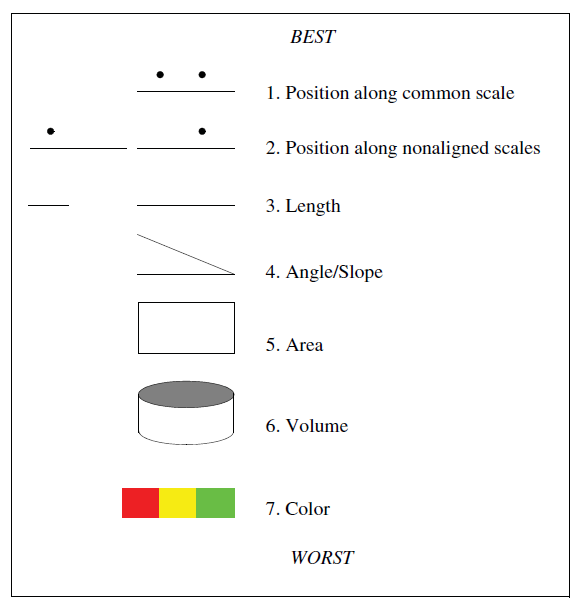 I may not go thus far to suggest color is worse than area and volume, but I do agree that positioning along non-aligned scales is much better than color. In other words, if I have two curves to show, I'd opt for paneling them onto to their own coordinate then put the graphs side by side, or plotting them together using line with different styles or grey scales over using colored lines.

The baseline for me is, the added colors should have their dimension (aka variable) to represent. If there is anything that does the same job, remove the colors because now the colors are "non-informative ink," as described by Tufte.

I do agree that colors catch attention, but just because it gets attention does not mean people can distinguish them well and can isolate the information well. Particularly, colors interact; just by pairing with some different colors, the same color can look different. For instance, here is an example borrowed elsewhere. The brown and the orange tiles pointed by an white arrow are actually of the same color. 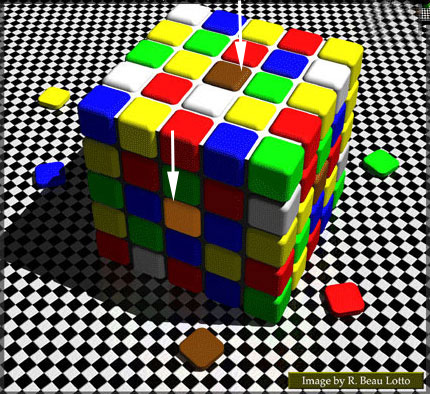 Why care about black and white?

And you asked "how many people actually read print articles anymore?" I would think that there are a lot. Schools in developing countries may not have color printer, and not every student has access to computer and the Internet. Their only way to learn about a journal article may just be through photocopies. Even in the US, with the rapid adoption of tablets, I still see a lot of journal clubs and meetings relying on B&W photocopies.

Now when I go to deliver any workshops in other countries, I always photocopy a few sample pages of my handout to make sure they are still legible. And Brewer's work has been a lifesaver for me.

In a nutshell, I embrace data visualization and the increasing acceptance of colors thrills me. Though in the process I believe we should remind ourselves to be humble and do not create works that very disproportionally benefit people who are riding high at the technology tide. John Tukey laid the groundwork of some graphical exploratory data analysis, Charles Minard made a visual with rich amount of variables like 150 years ago and yet still considered to be pretty bad-ass by today's standard. How many colors did they use? Just one.

At the end of the day, I would probably argue that design trumps all. It's not about color or non-color, it's about if they are used efficiently to maximize information transfer and minimize noises. At this moment, for me, lines, dots, shades along grey scale, and empty spaces are my staples; colors are my spices.

When making plots, I like to use reasonably subtle colours and combine them with different line or marker styles (e.g. blue triangles and red circles, or a black solid line and a blue dotted line). If printed in black and white the figure is still easily readable, and the colour version makes things a little more differentiable.

Stick to dark or pale colours, and they will enhance the appearance and readability of your document.

Why might be reasons for you to stick to black and white:

Mortiarty has said that the choice of colors is crucial. This is very true (and under appreciated by many), both for rendering and perception. I would advise you to read a book about color theory or color design (this one is the one I read to strengthen my understanding of these things).

To given an example, the software I love for drawing figures (Grace) has an almost unusable default color palette (left below), but with some practice I could change it to a palette that is quite nice to use (right below):

Look in particular at how the basic colors have been desaturated: red, blue, green, and yellow.

Basically, the reason is as you suggested: historically, it has been very expensive to print in color, which made it unattractive for most research groups to do so.

Now, however, it is increasingly common for most distribution of journal articles to be in PDF form, which can just as easily use color as not. Many journals will let you do "color online" for the same cost as black-and-white. However, if you are planning to use colors, then they should be used in an intelligent manner. Arbitrarily using colors in a haphazard manner can make understanding even harder than using black and white. (Don't forget that many people are color-blind!)

Some journals will ask you to pay a per-figure fee for your print figures to appear in color. If color really enhances the figure, then this is worth it. But if, say, you're just using a monochrome red colormap instead of grayscale, it's not.

Some might claim that having black and white is better because it's cheaper to print and keeps the focus on the content.

But I disagree with using black and white and think that the content is better supplemented with color. There is research that if your mood is changed positively when learning (with our 5 senses), humans retain more information. (Example: don't you retain more when you eat dinner with your friends in a new restaurant versus sitting at your desk and talking to someone on the phone?) This is not true if the brain becomes conditioned to the environment (or restaurant in my example). So the environment should continually change to increase one's ability to learn. Thus, you should have a web interface to keep changing the theme to something new each day they visit the research. If it's on paper, then you're S.O.L.

You could keep it in black and white if it's on paper and just spray some good smelling perfume on the paper. That may allow others to retain more with smell than with color, because smell has more of an impact on the brain than color.

Another way would be to put it in a card that plays classical music. When listening to classical music while learning, you will retain more. Hearing is on the list of 5 senses.

I found this the other day that might help you.

I'm not sure which one is better.

You will find the work of many Adobe geniuses that might make your research a lot easier, rather than re-inventing the color wheel.

Many journals will either charge for the use of color (especially those that still appear in print) and a few I've run across outright ban its use unless it's essential for an understanding of the figure (some photographs, etc.).

That being said, there's no reason you can't use color if you're willing to pay the fees, publish in online journals, use color in electronic supplements, etc.

One essential thing I find, that I always check as a reviewer, and find appallingly uncommon in color figures: make sure they're still understandable in black and white. It doesn't have to be as good, but someone printing out your work on their office printer should still be able to understand what you did. Distributed in PDF or not, I can't read things for comprehension on a screen, so I print them out - I know a fair number of colleagues who do likewise. And I have yet to encounter a figure that needed printer unfriendly colors to be understood.

0
Using color in figures for economics journals
1
Importance of colored figures in publications
29
Clear colormap for figures when printed?
16
Can someone explain what is being said here in color publishing in the American Mathematical Monthly?
17
Color space for papers: CMYK or RGB?
2
How to handle colors of photorealistic images in publications

8
What are the reasons for not using title and designation in publications?
17
Color space for papers: CMYK or RGB?
8
Are there conventions for research paper flowcharts?
9
Are there guidelines for choosing colors in figures?
0
When are there reasons to cite more or fewer sources?