How should I reference my own previous work in a talk to a general audience?

I have to give a presentation to a general scientific audience (specifically, an interview talk). As part of the presentation I would like to highlight some of my previous work.

I work in mathematics, where paper authorship is always alphabetical. The standard practice in talks is to replace your own name with an initial. That is, a person with the last name Potter might present their joint work with Granger and Weasley as "the horcrux theorem, due to Granger-P.-Weasley".

Presumably this mathematical convention is not used or even known in the general scientific community.

ETA: thanks everyone for your answers!

I’m editing to highlight a point which hasn’t been addressed yet - how does one convey that authorship in mathematics is alphabetical? (My last name begins with R so I’m almost always the last author in any paper of mine.)

I don’t want to change the order of authors in a published paper, but I also don’t want it to seem like I’ve never been a first author.

Is it okay to simply state this verbally? This seems like it could be perceived as somewhat tacky....

If the list of authors is short, just write all of them: For example: Lagrange, Cauchy and Carnot, 1800, Journal of Mathematics You may want to put your own name in bold. If there are many authors, then a pretty standard way in many disciplines is to write as FirstName et al., see here: https://www.scribendi.com/advice/how_to_use_et_al.en.html But if you are at the middle, you need to choose. Maybe something link: AAA ... YouName et al., Or you can still put your name as first and the rest as et al.,

In my field, and in several other related fields of physics and engineering, there's no distinction between referencing one own's work or other's people work. So, generally, in the slides, one simply puts a short form of the reference, like (in the slides, I use et al. when there are more then two authors)

Notice that even if I'm actually also an author in the second case, I don't break the format.

During the speech, describing what's in the slides, one would simply say things like "in our previous work [...]" or "in 2015 we developed [...]" or similar sentences.

Another way of referencing someone's work, either own's or someone else's, is that of inserting in the slides a picture of the article's title with the journal and list of authors. I've seen this quite frequently, and I used it myself. You need indeed a bit more space for this but, perhaps, for a general audience, this could be the clearest solution (and it wouldn't hide your contribution). An example of this, taken from a set of mine, is shown below: 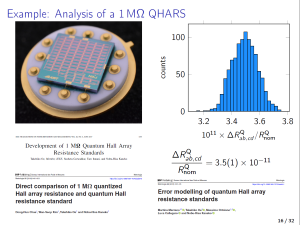 As I understand the question, you are talking to a slide presentation. Any slide will be on screen for a very very few minutes. Nobody, I mean nobody, will read the details of your citation from a slide. Your aim is to leave the audience in no doubt that you are presenting your own work, but nevertheless, not to hide the fact that you were collaborating with other researchers. So you say something like 'as I and my collaborators have shown in our recent paper...'.

The slide can give the full citation, if you really think that is necessary. In practice you don't need to: 'Buggins et al. (2019)' will give anyone who is sufficiently interested all the information they need to track down the relevant paper.

In conversation, just reference it naturally. If it is a paper that you were prime mover on, call it "my paper". If one, you assisted on, mention that (and probably note what you helped on...they want to know what you did, more than what the paper did).

For slides, just list the footnotes or final references in normalm bibliographic format (i.e. follow the math format of alphaticity, list how the papers were published or planned to be published). But I would maybe do references at the end or just emphasize the actual argument. Not an appearance of a math paper transcribed into PPT.

Not the answer you're looking for? Browse other questions tagged citations presentation interview self-citation .

14
How are citations used to fairly compare researchers: fewer publications and fewer co-authors versus more publications with many co-authors
20
How do I communicate my research with a general audience more effectively?
16
How to greet the audience at the beginning of a PhD defense talk/presentation?
23
Is strict adherence to a citation format really necessary in actual research?
1
How to cite own unpublished work in text and reference?
2
How should I respond when an audience points out an issue in my research in my talk?
6
How to highlight original work in a talk where it is not expected?
17
Found published work that doesn't reference previous related work
8
Former collaborator presenting joint research as his own