Why are MBA programs closing in the United States?

There are various reports about full-time, on-campus MBA programs closing its doors, e.g. from LinkedIn:

MBA programs are getting axed: The number of full-time MBA programs in the U.S. declined by 9% between 2014 and 2018, the Wall Street Journal reports. Wake Forest, Virginia Tech and the University of Iowa are among several universities that have decided to shutter their full-time programs, opting to offer online programs and specialty business masters instead. Applications to full-time MBA programs — even at elite programs like Harvard and Stanford — have declined in recent years,

Applications in the United States are down 6.6 percent -- while they are growing in Asia, Canada and Europe.

Why is this happening?

Here are some references that describe this counter-cyclical behavior of applications to graduate school.

From a U.S. domestic prospective, historically, U.S. business school application volume has run countercyclical to the economy," Basye wrote in an email. "In times of higher unemployment or job loss, people often go back to school. In times of full employment or high GDP growth – like right now – opportunity costs are higher to leave a job and return to school.

Wendi Go, "Is Enrollment into Graduate School Affected by the Business Cycle?", Department of Economics, Stanford, May 11, 2009

Because MBA programs are often viewed by young people, especially those with few other career options, as a safe harbor for weathering economic storms, business school applications have historically been countercyclical.

I would know nothing about this issue except for the link that BrianH provided in a comment to an Inside Higher Ed article. I found it quite interesting; here are the top perceived reasons for the fall in admissions from a survey of admissions officials at 150 MBA programs:

Regarding the top reason in that list, the very last line of that article has what I think is an important qualifying detail:

A study by the Graduate Management Admission Council found declines in application volume for M.B.A. programs but gains for those in Asia, Canada and Europe.

Here's a link to the article on that specific topic, titled, "M.B.A. Applications Drop (Except Outside the U.S.)".

From watching the MBA market for over 15 years: 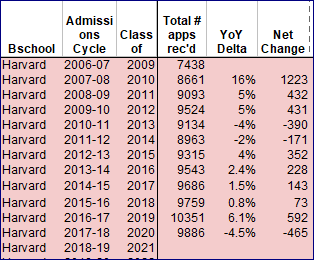 tl;dr: App volumes are going down for U.S. schools due to politics, American corporate hiring practices, and due to predictable and expected economic factors. This doesn't mean that the MBA is not still in demand or valued by either employers or by students themselves, nor is there any evidence that the best American business schools are in trouble or at risk of failing.

... to the point where b-schools would shut down, though? That suggests more than just the result of low unemployment, no? I have in mind a permanent shift away from b-school education, but I'm not sure; it's not like the skill sets gotten from b-school are analogous to skills in ... coal mining? investment bankers, private equity analysts, marketing / product managers are still very much needed, and MBA programs train for those careers, right? I don't have an MBA so am not sure.

I think that you misunderstand the problem. Let's say there are three business schools total. They are called

I got these from this list. I picked Pennsylvania because I know that Wharton is often ranked first in the nation. So I am using these as proxies for a very good, average, and weak business school (which may not be true about Rosemont).

Now, let's say that each school can support a thousand students. So in a year with good demand of more than three thousand, they are all turning away students.

Now, let's consider a year of subpar demand. Instead of more than three thousand applicants, there are only two thousand. What happens?

Wharton continues to take a thousand applicants. Because everyone wants to go there. It's the best.

Palumbo takes a thousand applicants who either didn't get into Wharton or didn't even try. Because it's preferred to Rosemont.

Rosemont gets zero applicants who don't go to either Wharton or Palumbo instead. Rosemont goes out of business.

Now, in reality things aren't so clear. Some people will want to go to Rosemont because it is common to pursue an MBA while working and Rosemont happens to be near their job. And Wharton may not lower its standards to take the full enrollment. And price may matter as well. Wharton may charge more. But all this just shifts the problem. If Ivy League schools have to maintain a certain minimum standard, then the tenth best Ivy might take the place of Rosemont in this example. But it doesn't really matter.

If a college has to lower its standards and still only gets half as many applicants, it can't keep the program running. Because even if the industry is only off 10%, you will find that a large number of schools keep their enrollment steady while a few schools drop a lot. Those few schools go out of business.

Business is not a career choice

Another issue is that investment bankers and private equity analysts aren't necessarily business school graduates. Equity analysts are often physicists, because there is hefty math needed. Investment bankers may be lawyers or accountants (or have a degree in banking, finance, or economics). An MBA is not so much for a career choice. An MBA is more of a tool for someone who has experience in a job and has started into management. Now they get the MBA so as to be able to get promoted into a better managerial position.

That's why people with jobs get MBAs. But if someone is laid off, they might also pursue an MBA. Because if the job market is tight, they can't find a job right now and might just as well try to improve themselves. It's that group that is counter-cyclical. An MBA might be that thing they never had time to do. But in a slow economy, they have that time.

Another issue is that if there is a shortage of business school graduates, many of the jobs that they do do not actually require an MBA. If the MBA provides useful training, it might be possible to replace it with on the job training. Because an MBA is necessarily a general degree, while a specific job might only need a small subset of that education.

Another issue is that to some extent, the schools have to compete with businesses for professors. In a good economy, professors' salaries may increase because they get offers from businesses. If the schools want to keep their professors, the schools may have to increase salaries. Which can be problematic if they are also facing falling enrollment. Increasing costs and falling revenues is a recipe for bankruptcy.

In a bad economy, the reverse happens. People who have the qualifications to be professors get laid off from their jobs and return to academia because it happens to be hiring. And now a college might launch a business school because they can.