When did US undergraduate education become so expensive?

As far as I know, in the majority of countries in the world, especially in Europe, undergraduate education, even at the top universities, is almost always significantly less expensive than at prestigous US universities.

This is representative of most of the Ivy League schools as well as many liberal arts schools which are less well known internationally.

The average tuition cost at my school in France is a mere 2000 euros per year whilst other French schools have tuition ranging from 300 euros per year to 15,000 in one extreme case. In several European countries, tuition is either free or students are payed to study.

The student debt crisis in the US is a recent phenomenon, but how recent? I suspect that that students at Ivy League schools in the 1930's weren't paying anything close to their present counterparts, adjusting for inflation.

So when exactly did top tier American schools start raising tuition and board fees to the astronomical levels we see now?

I will leave out the question if whether this is sustainable or what the consequences will be, as this is speculative and opinion-based. 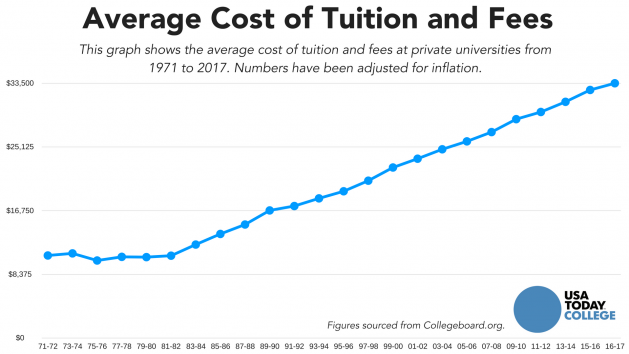 To answer the question in the title: it looks like it started rising above inflation in around 1983.

The simplest explanation I've heard is that proliferation of student loans have allowed the costs to skyrocket by spreading the cost to the student over time. Similar effects have occurred in other areas where loans have become prolific, such as 30 year housing loans and mortgages. The bank can afford to wait years, even decades, to reap the benefits, as it operates by volume and in the long-term. As such the sticker price rises to account for the fact that people can now "afford" to pay large amounts for things. Amounts that will take them many years of budgeting to actually cover. It is the loan itself that grants and permits them that time.

So while a historically normal transaction might be "pay now, get what you pay for now", loans (and things like credit cards) turn the transaction into "get what you pay for now, pay for it over the next several years". A one-time cost of $100, say, can be ballooned into charging $200 instead and then with interest costing you $240; but spread out over a year that's just 20 bucks a month, which at least feels easier to afford than turning over 100 bucks right away.

The issue is not one-dimensional, of course, as the proliferation of scholarships, financial assistance, and moreover the commercialization of these things (wherein organizations seek to profit off these matters, and so work to proliferate them), also allows costs to be deferred away from the individual student and the immediate moment. For example, government assistance would move the costs onto the tax base, which is again a deeper pocket to plumb than the student's.

I didn't attend a US University (although my wife teaches at one), but I would think a big part of the reason is down to simple supply and demand economics (which after all is what governs the price of pretty much anything in a free market).

Ivy league US Universities, in particular, are widely considered to be some of the absolute top Universities in the world. Plus, the US is a very desirable country to live in, in general. So, the level of demand is very high, and has only been increasing when you consider the huge increase in both the US and worldwide populations over the past 100 years.

However, on the supply side, the number of US Ivy league schools is very limited and has not increased significantly over the past 100 years (at least, not anywhere near the rate of the population increase).

So, I think it is natural to see significant increases in the price of something, when the demand is ever-increasing, but the supply is relatively fixed.

The free-market capitalist nature of the US has probably exacerbated the situation, since the freer a market is, the more susceptible prices will be to supply/demand forces. Regulation and state intervention can help to 'dampen' the supply/demand effect, which may be what is happening to a larger extent in other countries.

I disagree with this answer, that loans are a significant part of the problem. They may be enabling people to pay higher prices, but it is not as if loans are a new concept that has only emerged in the past 50 years. Also, loans are available for pretty much anything else that people might want to buy, so the simple existence of loans doesn't explain why the price of US college education has risen so much faster than inflation.

To address the OP's question of when the price increases occurred: I think it is highly unlikely there was any 'watershed' moment where prices saw a sudden 'step change'. Prices have been creeping up gradually over many decades, as the population-driven demand has increased.

As others have mentioned, there are numerous reasons. Here's a couple more:

Universities have been competing with each other. Room and Board have gone up because the amenities have improved. Part of the improving is matching the improving in non-academic life, part of it is acting as a benefit to make one university more appealing than another. Another way to compete is for the faculty; faculty is (on average) paid better than they used to be. (Policy Report)

Another sort of competition is in showing how exclusive they are; part of that is by having a large sticker price, but then actually charging less on average. (Forbes article.)

Lastly (for me and my answer, anyway), financial support for public universities and colleges has been decreasing. They have to make up the revenue differences somewhere; cuts to programs can only go so deep. (Washington Post article.)

Not the answer you're looking for? Browse other questions tagged funding undergraduate tuition .