When and why did journal article titles become descriptive, rather than creatively allusive?

In 1926, the article titled “On a certain minimal problem” was published. Nobody could guess what it was about, from the title alone.

Nowadays, one may expect something more descriptive, such as "Workspace Augmentation of Photon Impingement Through Impurities Removal".

I'd be interested when and why did the titles change, from the allusive style of the early 20th century, to the descriptive titles of today.

Was it a gradual change? Was it prompted by some notable event or influence? Was there a period when journal articles (or "letters" as it was then) did not have titles?

There's an interesting discussion of this in the introduction to Titles are "serious stuff": a historical study of academic titles by Salager-Meyer and Alcaraz Ariza (link). One point they argue is that titles (as well as abstracts) increasingly need to be more informative given the growing production of papers, in order for readers to make quick decisions on whether to read them or not. If this is the main factor, the information content would be expected to increase similarly to the size of the relevant academic community.

However, there's something I find much more interesting hidden in the introduction:

Other scholars have stressed that titles should be as informative as possible in order to facilitate the process of storing, searching and retrieving the information (Black 1962; Mitchell 1968; Tocatlian 1970; Feinberg 1973; Manten and Greenhalgh 1977; Hodges 1983; Diodato and Pearson 1985).

The paper by J. D. Black (IBM British Laboratories) is titled The Keyword: Its Use in Abstracting, Indexing and Retrieving Information and discusses how

Librarians have been accustomed to using systems, schedules, thesauri, lists of headings, etc., to define and classify the literature which comes into their keeping. They use these same methods to retrieve and disseminate this literature. However, within recent years these methods have begun to show signs of strain, and in some cases breakdown, due to the tremendous increase in the volume and complexity of technical literature.

Specifically, Black showed that a 1960s era (punch card) computer can be used to extract keywords from a title to achieve a similar efficiency as manual classification, but for significantly cheaper cost, and allowing better scalability. Black also writes

While the index may be practical and usable, we still do not know precisely how efficient it is. In its present form, the efficiency is dependent on the author's choice of title. <...> before long the engineer, scientist, or mathematician will realize that if his title is not descriptive enough his paper will not be used as much as it might be.

Of course, if this automation of title processing is the main factor, one would expect to see a significant increase in the information content of titles starting some point in the late 50s, or early 60s. A 1970 paper by Jacques J. Tocatlian called Are titles for chemical papers becoming more informative? looked at precisely this, by comparing measures of information content between papers published in 1948, 1958, and 1968. (1958 being the year the KWIC index, or Key Word in Context, was introduced.) As Fig. 1 below shows, they found no significant difference between 1948 and 1958, but very different results for 1968. Here the measure A, for example, is defined as the total number of substantive or informative words. On the other hand, Fig. 2 shows that titles with few substantive words might have started being eliminated before the introduction of the KWIC index. 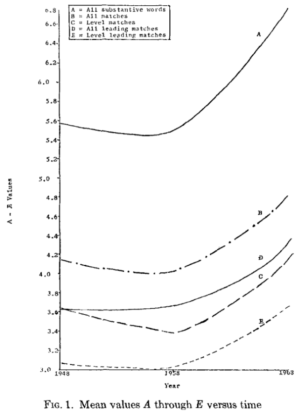 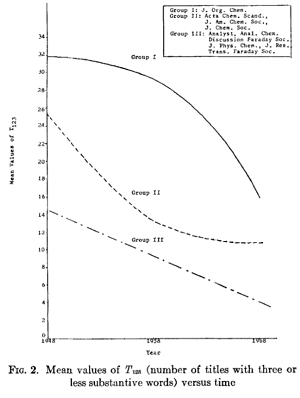 I don't know if there is similar evidence from other fields that the introduction of automated indexing was an important development, but it strikes me as likely that the same mechanisms would apply elsewhere too. So, long story short, a growing number of publications and the introduction of computers may have driven a large part of the push towards more descriptive and informative titles.

I have no evidence for this, but I'd guess that a significant factor is that at one time, people used to subscribe to particular journals and read, or at least skim, every article in every issue. So the title of your article wasn't necessarily a big factor in whether people read it or not.

Now that the volume of published research is much larger, and especially since the rise of computer-based searchable indexing of journals, readers will instead search for articles on a particular topic. In a listing of search results, the article's title is the first thing you see, and people use it to decide whether to go on to read the abstract or the paper itself. Thus, it is now more important to choose a descriptive title; if a researcher cannot tell from the title that it is (at least potentially) relevant to their interests, they are probably not going to read it at all.

I don't know that this is actually a trend, but to the extent that it is - here a few possible contributing factors:

Why didn't you title your question "On a certain trend in titles"? Because you wanted people to know at a glance what your question is about and click on it. In my field, there are at least a dozen new arXiv preprints a day. If the title doesn't look even slightly interesting, I pass. Giving an "allusive" (I protest at the qualifier "creative") is fine if you're a superstar, otherwise, you will just get lost in the mass of academic literature.

One thing that others have not mentioned: it's pretentious to give such a title to your article. If you write an article entitled "on a certain minimal model", it better be the definitive article on minimal models. If you don't, then you are embarrassing yourself by implicitly claiming that your text is on equal footing with other great texts entitled "On..." as was common at some point in math when authors wrote treatises.

One aspect that I don't see mentioned yet is the change from academia as an upper-middle-class middle-aged white male club to a broader, more diverse group of people (that still needs to be more diverse). Clubs have in-jokes, secret handshakes, common interests aside from their common profession. Professional groups don't.

(Since comments suggest this isn't clear, I'm talking about the 1950s, not the 19th century. If you're not familiar with the Old Boys Club that made up academia in the first half of the 20th century, look at photos and count the women, non-white members. Look up the Jewish quota, which was still officially in place until the 1960s in some places in North America - and unofficially, in many places.)

When you could assume that most people who would look at your title had a similar background to you, you could be pretty confident your clever little pun would register in the context you meant. Today, hopefully, that's not the case.

I see this as the result of online presence of people as we are more dependent on internet for any prior peice of informtion. So people search for results and google work starts here google bots pick most relevant and trusted content and produce as result for the users. Here comes bunch or results now users pick the most descriptive easy and picky titled post. So there is a hunch in market to get more and more traffic resulting more descriptive or say over optimised titles

Not the answer you're looking for? Browse other questions tagged journals academic-history .

27
Why become a journal editor?
51
How and why did the top journals become top journals?
9
When did it become commonplace for data set providers to ask users to cite their paper(s)?
29
When and why did conferences pick up the habit of giving out conference bags to attendees?
44
What is the point in publishing a paper in a journal rather than arXiv?
12
When and how did journal publications start to have such an important role in evaluating researchers?
20
From a historical perspective, when did impact factors become so important?
47
Why did it become so much more expensive to start a university?
23
When did "Publish or Perish" first become a thing?