Does anyone in Academia.SE know about Saudi universities?

I want to go to the USA for a PhD. But, probably won't get a visa for having a study gap and/or being unemployed and old (on most occasions refusal letter would reply "You haven't satisfied us that you would leave the country after the designated period of your study!"). So, I am planning to get a PhD in Saudi university so that I can later go for a PostDoc in the USA. 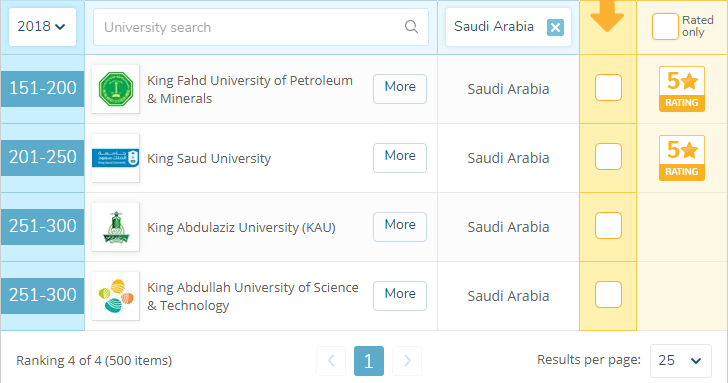 Looks like Saudi Arabia has a number of world-class universities. I heard they also pay scary amount of money to PhD students.

I heard that admission committees in US universities often find hard times evaluating weight of degrees from unfamiliar universities while selecting potential research students, and instructors.

How familiar are Saudi universities in the USA in the field of CS? Are they good enough to support my goal?

Note. The rationale behind going to Saudi Arabia is, it has a very good relationship with the USA. I can save some money, and then get visa by showing that fund.

Note.2. some users asked in the comment section why I am considering KSA why not Singapore, Hong Kong, etc. Well, as far as I researched, universities in SEA has issues in their learning cultures. As far as I understand, they prefer memorization based learning. I also heard that a large number of students in Taiwan, Japan, and so on commit suicides because of study pressures.

First, let me answer about the reputation/ranking of Saudi universities:

I should warn you that Saudi Arabian universities have a reputation for "gaming" these rankings you are relying on.

What they do is pay researchers at western universities to accept a second affiliation there. This allows the Saudi university to list them as faculty and claim credit for their publications and citations and thereby boost their ranking. In reality, these researchers are rarely if ever present and do not contribute to the academic environment there. Perhaps they visit for a week and give a few talks, but they do not supervise students or teach courses there.

For more details, see this question and the links in it: What should you do if a co-author has an unethical affiliation? The answers to this question also show how people in the west react to this.

So the reality is that Saudi universities have a very questionable reputation in the west, despite their good performance in international rankings.

Note that I'm not saying these are bad universities, but simply that you should be wary of the rankings and the claimed faculty. Every university seeks to maximize it's reputation, but Saudi Arabian universities have a reputation for going overboard with this.

Now the second part of your question -- how does going to a Saudi university play into your academic career goals given that you want to end up in the US:

Generally speaking, moving to the US after PhD is much harder than before. This is my personal impression and is supported by data.

The main reason is that, after your PhD, you are evaluated on your research and your recommendation letter writers and connections matter a lot. Thus you want to have research exposure in the US and you want to have connections in the US and letters from US professors. The easiest way to do that is to be in the US. Before your PhD this doesn't matter so much, as you are evaluated on your potential.

Another reason is that, as you move up the career ladder, positions get more and more competitive. This makes everything, including moving countries, harder.

Of course, countries like Canada and Israel are very close to the US in terms of research connections. So doing a PhD there will be almost as good as doing one in the US.

If you are having trouble getting into a PhD program that you want, then doing a Masters is probably a good idea, especially if you get a good recommendation letter out of it. It isn't critical where you do a Masters.

I am from Saudi. I also remember there is a KAUST faculty here as well.

First, Do your best to go to KAUST. You can be accepted in elite US institute and yet rejected from KAUST. It is a serious grad-only institute. So go for it if you can. It is much better for you in both money and research output.

Second, The bribing thing for ranking isn’t as accurate as it seems to be. While definitely one institute had serious issues in this regard, large number of Saudi universities didn’t go that way. Actually and I have seen this in STEM fields, nowadays some grad students have co-supervisor overseas from a reputable institute. I also don’t think Saudi universities provide good stipends for their grad students. My suggestion is to go for a good (usually young) supervisor who published in top venues in your field (For example, if you’re into AI look for faculties who published in ICML/AAAI/AAMAS/IJCAI/CP). There are few number of them. Contact them in advance and see if they can supervise you. My ranking for the universities in the picture in CS: KAUST KFUPM KSU KAU. I know couple of profs in Canada and they’ve done their PhD in KFUPM.

My own suggestion: Saudi universities are not set up for grad school. The system is so old and need dramatic change. Look for better environment.

First: if you want a postdoc position in the US, what will matter are your qualifications, not your bank account.

I am faculty at KAUST, and I was born and studied in the US. KAUST does not game the rankings in the ways described in the answer by @Thomas (though he's correct that other Saudi universities have done this).

I don't put too much stock in bibliometric measures, but KAUST is currently ranked #1 in the world in citations per faculty (to see this, go to that page and click 'rankings indicators' and then 'citations per faculty'). None of those citations are due to any kind of fake affiliations; they are KAUST researchers who live and work at KAUST.

KAUST faculty come from the world's top institutions and we send many of our graduates on to postdoctoral positions at top universities in the USA, like Princeton, Caltech, MIT, etc. Of course, many of them also go to industry and to other countries.

We are a very small and highly selective institution; we only run graduate programs and we have less than 1000 students, but again I think that choosing a graduate program based primarily on financial incentives is a mistake. It's true that all our admitted students are on generous scholarships. You need outstanding qualifications to get in, and admission is even less likely if (as it appears) your main goal is to save money.

Edit: I don't think my answer should be the accepted answer to this question, since I've only dealt with one very small institution.

44
What should you do if a co-author has an unethical affiliation?
16
Is obtaining a PhD from an Asian country really a career suicide?