I am writing several papers that require density plots of complex-valued functions of two variables f:R^2→C, where I'm primarily interested in the complex argument arg(f(x,y)) as a function of the input variables, but I wish to emphasize only the regions where the modulus |f(x,y)| is high.

However, this scheme suffers from being "non-orthogonal", in that some hue values (notably yellow and cyan) are much lighter than the baseline set by e.g. red or blue. I am looking for a combination that fixes these shortcomings, by providing: 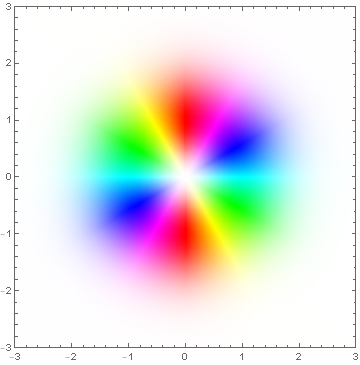 Note in particular how you can immediately read the ^2 exponent from the fact that over a round-trip around the origin you do a red→green→blue→back-to-red loop twice, while still being able to clearly tell that the function is concentrated at a ring around the origin between radii ~0.5 and ~1.5. However, there are still perceived 'intensity' gradients azimuthally within this ring (notably the perceived 'lobes' around the blue areas), which I would like to avoid. I would also, if nothing else, like to smoothen the visual contrast around the sharp ray-like features at yellow, cyan and, to a slightly lesser extent, magenta.

So, with that said: are there better options for dealing with this problem than the hue-chroma combination I'm currently using?

As you note, there are problems with the typical rainbow colour map.

In my work, I replaced the rainbow map with the Kovesi's first cyclic colour map for the angle values, and used either saturation or intensity (multiplication) for the modulus. In hindsight, it would probably make sense to map the raw modulus values to saturation / intensity using one of the perceptually uniform greyscale linear maps as well. 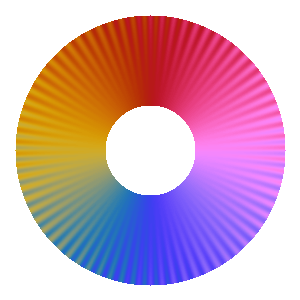 I am a fan of the Solarized colour scheme, which amongst others contains eight colours that have:

Using these eight colours for the angle and then whitening (using Solarized’s white) according to the absolute value gives me for your example: 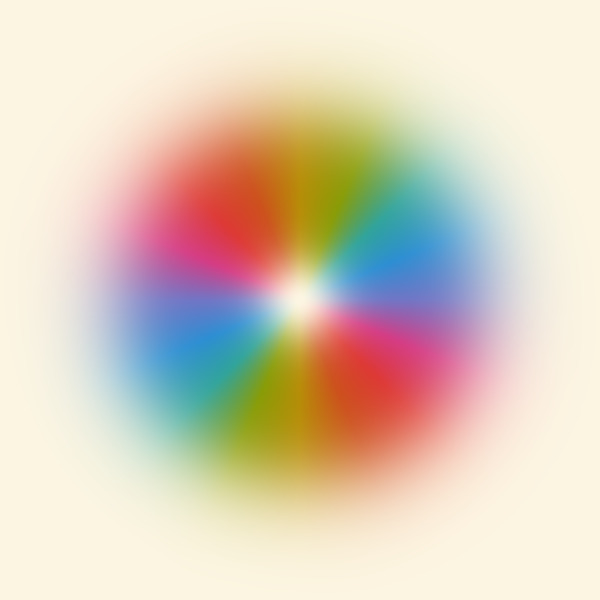 You may still perceive some sharp transitions, but most of these depend on the specific screen in my experience.

Note that this colour scheme is optimized for screen and not for print. In my experience it also works nice with projectors, and I use it for presentations (using the more intense variants for black and white).

Here is the Python code I used to generate the above image:

In general a good colour map is perceptually uniform (avoiding how the yellow and magenta stand out in your original), works when printed in black and white, and works for at least the majority of colour-blind people.

I'm not aware of any cyclic maps that manage black and white well (it's not really possible, because you can't have a monotonic progression of lightness and get back to where you started), and I'm not sure how well any of them do for colour-blindness, but perceptually uniform is achievable.

The other answers are good in pointing out the theory and offering some examples. The "Phase" map from CM-OCEAN is another example, and is available in "ready made" form for Python and Matlab.

41
Software for extracting data from a graph without having to click on every single point?
23
What are good principles for creating figures?
84
Are there good reasons to avoid using color in research papers?
19
Are there any guidelines for labeling axes in plots/graphs?
5
Surface plots vs. colour maps
13
Is it a good idea to connect data points on a plot to increase readability in slides?
1
What are the steps for republishing imagery held in archives?
6
Extent of reuse and reanalysis of data published by others
3
What are good principles for naming an algorithm?