Is a general GRE score of X sufficient for entry to postgraduate degree Y? [closed]

Ask Question
Asked 4 years ago
Modified 4 years ago
Viewed 395 times
9
This question was closed for strongly depending on individual factors. It is currently not accepting answers.

Please explain to the asker why we cannot answer their question and who may be able to do so. If there is a suitable question the author can ask about their situation, guide them towards it or edit the question if you can.

Question: I got general GRE scores of VR (verbal reasoning), QR (quantitative reasoning), and AW (analytical writing). Is this a good score to apply for entry to postgraduate degree in field X? How will this score look to the selection committee?

Preliminary remark: There are differing opinions on the important of the GRE in admissions to postgraduate programs, and its weight largely depends on the preferences of the academics making admission decisions. Some regard the GRE general test as useful information, and take it into account, and some regard it as unimportant. Meta-analysis of the predictive validity of the GRE can be found in Kuncel et al (2001). Nothing in this answer should be read as implying that the GRE is determinative of entry, but if you are going to submit scores on this test, or if you are required to do this, it is good if your scores compare favourably to your cohort of applicants.

Assessing your score relative to your field of study: Assessing your score on the general GRE test can be done by comparing your score to data on the scores of test-takers, broken down by their intended graduate major. Unsurprisingly, different fields have applicants with different levels of ability in the three sections of the GRE general test. A score that would be considered good in some fields will be considered weak in other fields, depending on the average standard of applicants to that field. Hence, it is important to look at your scores relative to the cohort of test-takers with your intended graduate major.

The Educational Testing Service (ETS) have published test data for test-takers (seniors and non-enrolled college graduates) who undertook the general GRE test in Financial Years 2014-17. This data shows score outcomes for each group, based on their intended graduate major. This data can be used as a reference to check how your score compares to other students who are intending to pursue the same graduate major as you. It can also be used by academics to help them to interpret your score. (ETS also produce annual 'snapshots' of score outcomes that give information on the scores across demographics and majors.)

If you would like to get a good idea of whether your GRE score compares favourably with your cohort (students seeking admission to study the same postgraduate major), the simplest thing to do is to compare your result to the published data for students in that cohort. The data gives score frequencies in bins, so it is not usually possible to obtain your exact percentile in the cohort, but it should be possible to see roughly where you fall in that cohort. The data also give means and standard deviations for the scores, so it is possible to obtain a standardised score relative to the cohort.

Example: In this related question the test-taker was seeking entry to an applied maths graduate program, with GRE general test scores of VR 167 (98%), QR 161 (78%) and AW 5.0 (93%). This can be compared with histograms of scores from this cohort taken from the aforementioned data (means and standard deviations are also given in the data): 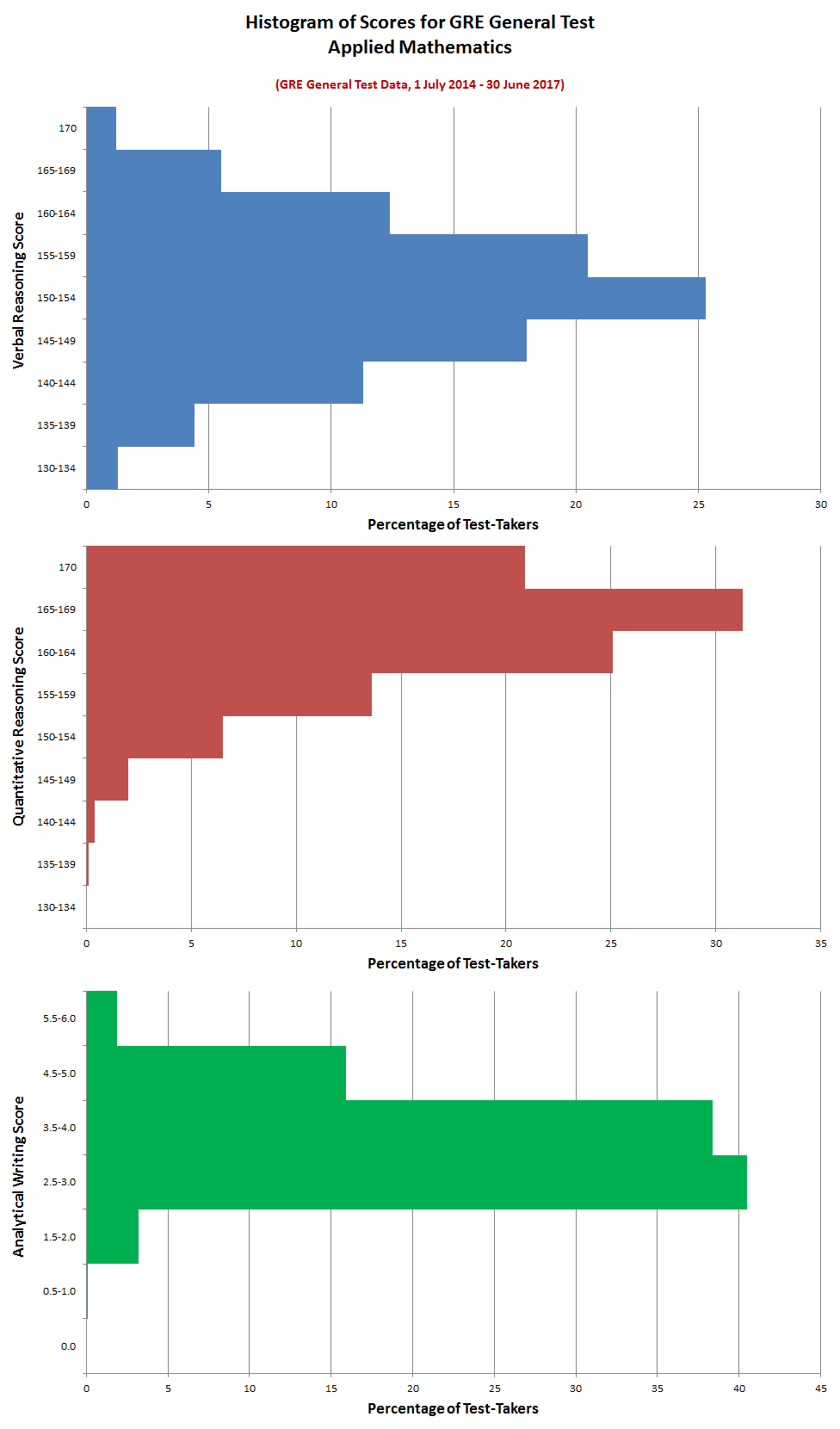 If we place the scores of this student into the data for the cohort of test-takers seeking entry to an applied mathematics graduate program we see that his quantitative reasoning score is actually below average for this cohort, despite being substantially above average relative to all test-takers. The standardised scores for this student (standard deviations above/below the mean) relative to this cohort is VR 1.875, QR -0.500, AW 1.875.

This result shows that this particular student has a lower quantitative reasoning score than the majority of the cohort, and so this is likely to be a weakness of the application (to the extent that GRE is considered). This is unsurprising when considering the fact that applicants for mathematics programs tend to have extremely high levels of quantitative reasoning ability.

Not the answer you're looking for? Browse other questions tagged graduate-admissions gre .

0
Higher GRE Quantitative score?
0
What does it mean to have a low quantitative but very high verbal/writing GRE for stats PhD application?
99
The GRE: Why does this still exist?
15
Is it OK to ask the graduate chair if my background is competitive?
3
Should I retake the general GRE or focus on subject test?
4
Should I send a 60 percentile Math GRE score to Applied Math PhD Program?
4
How to not get "filtered out" during graduate admissions in top programs?
0
GRE Scores for Graduate programs in Chemistry
-1
Is top 20% GRE scores enough be a strong applicant for an EECS/ECE PhD program?
0
How do mathematics graduate committees view Mathematics subject GRE scores around the 60th percentile?
See more linked questions

8
What is the preferred GRE Writing score for MS/CS student?
3
Do GRE verbal scores matter for graduate admissions in mathematics?
8
Are all math majors expected to get a perfect score on quantitative reasoning?
3
Should I retake the general GRE or focus on subject test?
0
Should I justify an average GRE score with a good excuse?