Does all computer science research involve heavy usage of mathematics?

I am starting my graduate studies in computer science this year and am confused as to what quality research (some new innovation or discovery) domain I would choose specifically amongst virtualization, distributed computing, containers, and/or blockchain.

My main issue is that I understand but am not interested in algorithms and their efficiencies. Similarly, I can understand my undergraduate level mathematics but that does not interest me. I have good knowledge and understanding of operating systems, virtualization, and containers concepts.

I have researched regarding this online and came to know people normally only compare out the efficiency of one algorithm over another in problems of memory sharing, process switching, and other similar problems; is there any other method or means to do something new in the field of cloud computing, containers or blockchain?

Thanks to all those who answered and commented. Answering some comments and to give some more context to my question:

So, my question's main perspective is: I find it hard to believe that computer science research (at least development of new techniques, tools, and platforms) is impossible without deep knowledge of mathematics and algorithm designing (I may be wrong but that's the point of the question). Is there established research work or progress done in these domains that do not involve very complex usage of algorithms and mathematics like integration, differentiation and such. Please note, I am trying to avoid complex usage and modification of algorithms and its maths. I am interested to discover methodologies of such research (I am hardly able to find much on the Internet).

The sad truth is that you absolutely don't need CS for most practical programming tasks.

But without a CS degree, you will have nearly zero chance for the better programming jobs.

Furthermore, without a high-level math/cs knowledge, your mental skills remain significantly under-developed, compared to your own possibilities or to the ones who actually got this degree.

The sad truth is, that the job of a programmer, the ability to write a program what a customer pays for, is hard, but it is an absolutely different type of knowledge, like to know the math of the General Relativity. This truth is so sad, so catastrophal, that you will likely spent some decades of your life, whining on it. But it is the truth.

CS, its math, yes it is such a knowledge. For example, to understand, why there is no such thing as "best compressor" (more exactly: there is, but there is no program what could implement it), is a similarly complex and interesting knowledge, like cutting edge physics. But you absolutely don't need this skill to be a well-going programmer selecting freely between well-paying jobs.

This is how the world works. You can fight it, you can whine on it. I did both of them, decades long.... and I never became a scientist, only a programmer.

These fights and these tears are yet before you.

My advice would be this: learn that math, and get your degree. So:

Believe me: if you do this now, you will be pride for that in your whole life. Despite the lifelong pain of your never reached goals.

About me: I am a mathematician with a PhD in CS. Now, to your question:

There are fields of CS that are less inclined to mathematics, such as "informatics and society". There is at least one field in CS that lives between mathematics, CS, and philosophy of all sciences! Logical programming, that is.

But as a computer scientist, you would need some amount of undergraduate level mathematics. Big-O analysis? Math! DACs? Math! Heck, moving a camera around in your 3D game is more math than many are comfortable with.

And don't get me started on mathematical software or formal languages.

As some claim, informatics is a portmanteau of "information" and "mathematics". 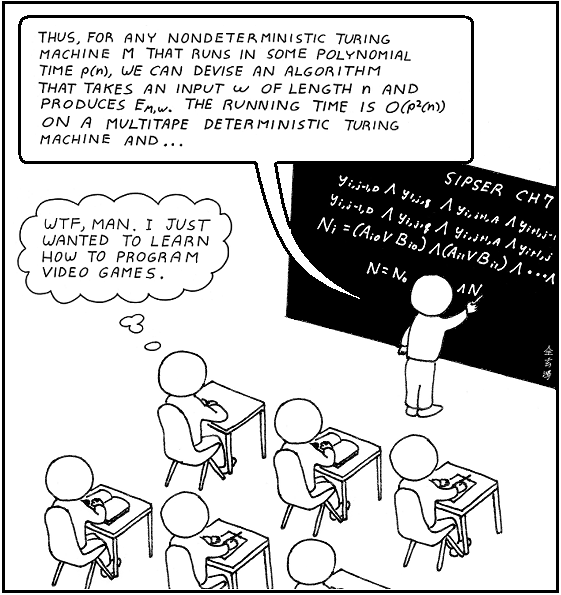 I find it hard to believe that computer science research (at least development of new techniques, tools, and platforms) is impossible without deep knowledge of mathematics and algorithm designing

It is true that CS research requires some knowledge of mathematics and algorithm design.

However, it is debatable that such knowledge is deep knowledge. It could be superficial in some aspects.

Some professional mathematicians -think of University professors or, in France, CNRS researchers in math- might (jokingly) say that CS is for those who have not been able to assess deeply mathematical knowledge.

I've got a PhD in CS, and the math I have used is much simpler that some algebraic topology lectures that I tried to follow in my Master's (I failed the exam on these lectures).

IIRC, D.Knuth said once that computer science is the mathematics of resources.

As other answers explain, you do need some mathematics to do computer science. (but you probably need less math than a professional mathematician do).

I think I am interested more in data center (or in general IT infrastructure) optimization with the use of cloud, virtualization, containers, and/or blockchain.

Then you still need to learn and use a lot of math (any kind of optimization work involves some math). But it is not as heavy as you say.

However, you probably need a few thousand hours of training in math to do CS (I don't call that deep knowledge).

Be sure to read http://norvig.com/21-days.html

Even if you want to make a serious effort toward developing something using CS tools, without Math you can never be sure that what you are doing is right. It will take time to learn it and if you stop learning it for some time or take a break you might start forgetting it.

Not the answer you're looking for? Browse other questions tagged career-path computer-science early-career methodology or ask your own question.